It was the fault of no one, or maybe it's everyone's fault...the San Andreas and Calaveras faults in Central California 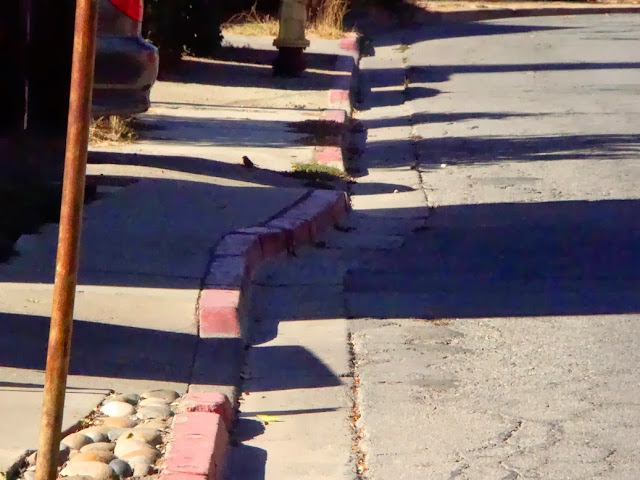 Central California has a lot of faults. One of them is a proclivity for bad geology puns. But it also has a great many exposures of active faults available for viewing in the space of an afternoon. The San Andreas, California's most famous fault cuts through the region, and the Calaveras fault lies a short distance to the east. It merges with the San Andreas north of Pinnacles National Park. 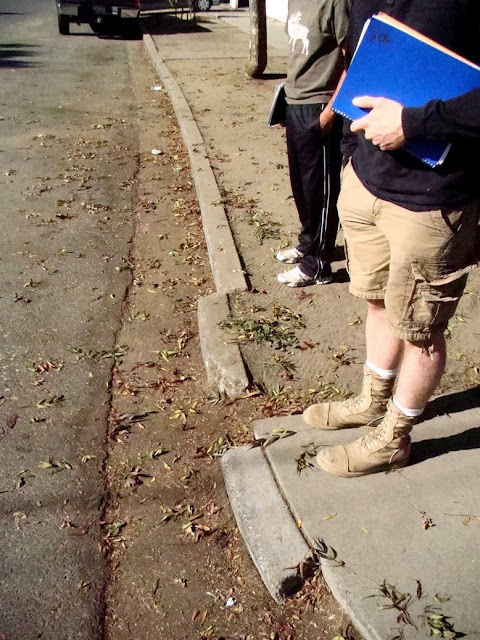 We became familiar with our faults today during our field trip between the town of Hollister and Pinnacles National Park in the California Coast Ranges. The faults are both actively creeping instead of building up ominous levels of stress. Earthquakes are a little bit less of a concern here, although some particular homeowners have problems with their foundations. 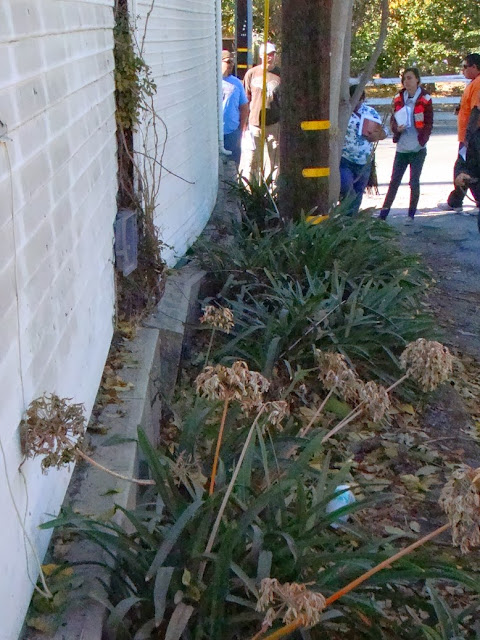 These are famous fault exposures. Photographs of these offset features have been published in textbooks all over the world. They are also easily accessible on public streets and parks. It is fascinating to watch the Earth in action. 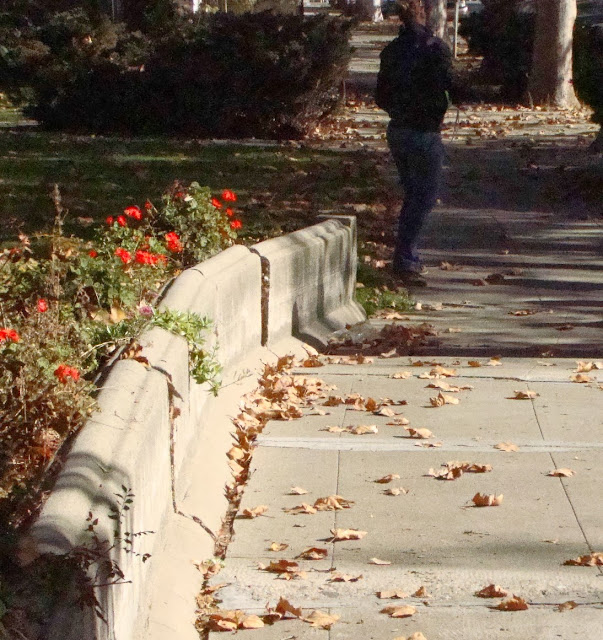 The Calaveras fault is an offshoot of the San Andreas, extending north for about 70 miles from the vicinity of Pinnacles National Park. It has produced several magnitude 6+ earthquakes in the historical period, including a 1911 event in Morgan Hill with a magnitude of 6.5, and another quake in 1984 of magnitude 6.2.
Dunne Park on Sixth Street in the town of Hollister is a good starting point to search out the fault zone. If you visit, please be respectful of the property lines. The people here see a lot of geology students, and while residents are almost always polite and even talkative, it would be sad to see "No Geologists Allowed" warnings springing up like "Neighborhood Watch" signs. 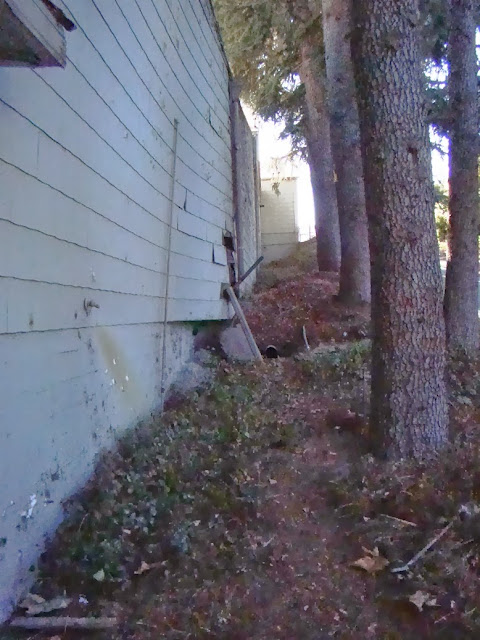 A short while later we headed south on Cienaga Road past the Hollister Hills Off-Road Vehicle park to an old winery. The warehouse was built directly on the creeping fault zone, and is slowly being ripped apart by the inexorable motion (two previous warehouses were apparently destroyed at this site as well). In the picture below, the cement wall was once connected to the wall with the blue tarp. They are offset by several feet. The dark plaque a bit to the left is a marker noting the establishment of the winery as a National Landmark. 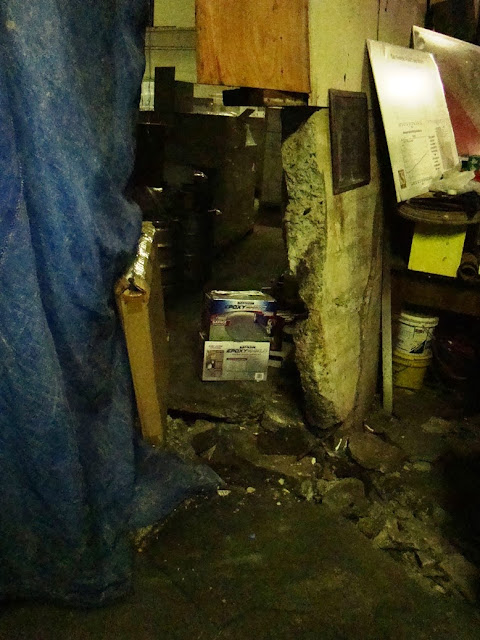 The owners of the winery are friendly and have never refused our students the opportunity to look at the fault damage in the building, even when important functions were in progress. They are to be commended for maintaining access to this important site.

The drainage culvert on the south side of the building is probably one of the most photographed fault offsets anywhere. 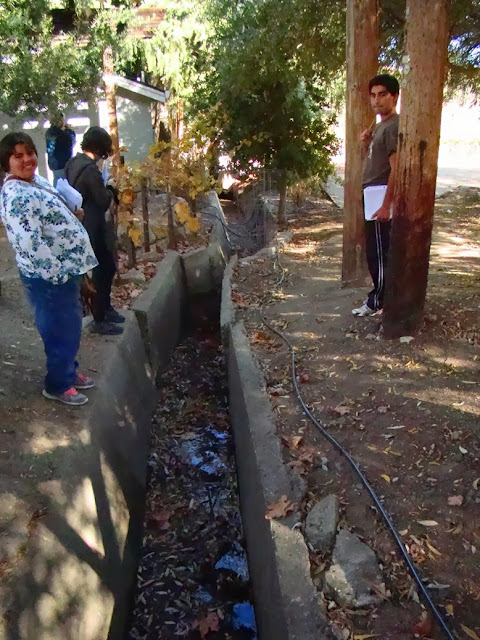 Our last fault feature of the day before arriving at Pinnacles National Park was a spot on Highway 25 where the San Andreas fault crosses the pavement. It has been patched many times, and in the last year or two, the highway was completely repaved. On our previous visit the road showed no evidence of motion, but this year we could see modest cracks forming. 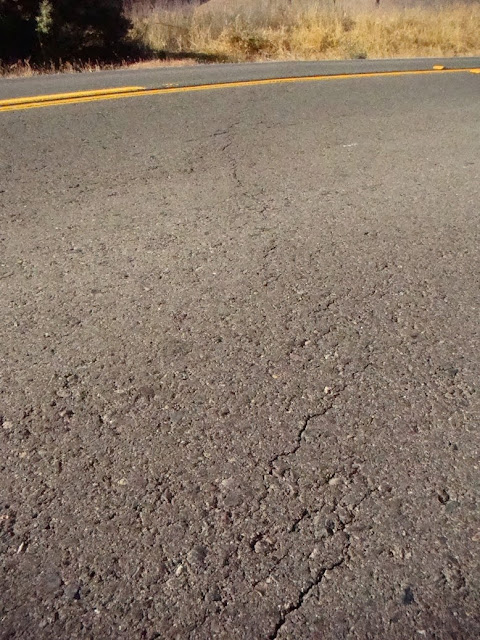 I would have felt really bad if we had set off a major quake by jumping on the fault zone, but then again it sure would have been neat to stand on the fault as a large earthquake commenced. 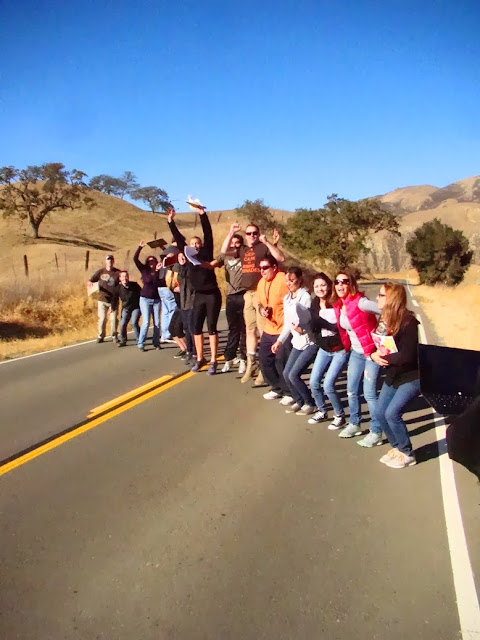 Back to the beaches in coming posts!
Posted by Garry Hayes at 11:37 PM

I went to college with a kid whose family home was built across one of these faults. He said that sometimes one half of the house would shake, but the other not.

He described his family sitting on opposite sides of the faults, and the shaking side looking alarmed, and the still side going "Wut?"