Where the Sierra Nevada Rises From the Sea: Not the Easiest Beach to Find 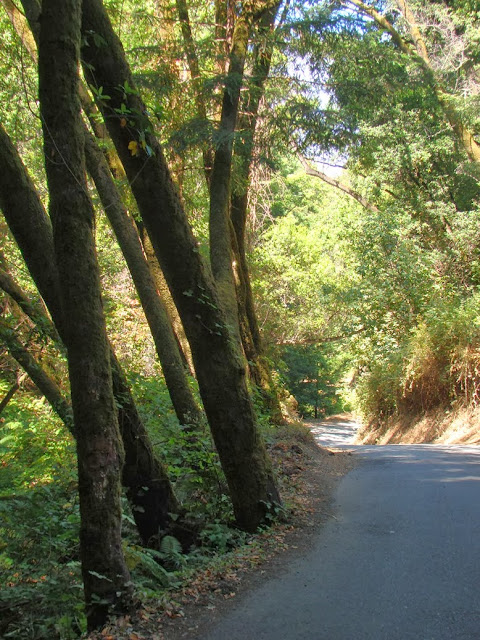 A pleasant country road winds for a few miles through redwood forest and thickets of brush and poison oak to a secluded hidden beach. I've been through the region maybe a dozen times, but I never noticed the road branching off of Highway 1, and I usually traveled without detailed maps (really, can you believe THAT??). There are no signs, not even one giving the road a name (it's officially Sycamore Canyon Road for the record). Once you know it exists, it's not too hard to locate it, so I will leave you to your own devices on finding it for yourself. 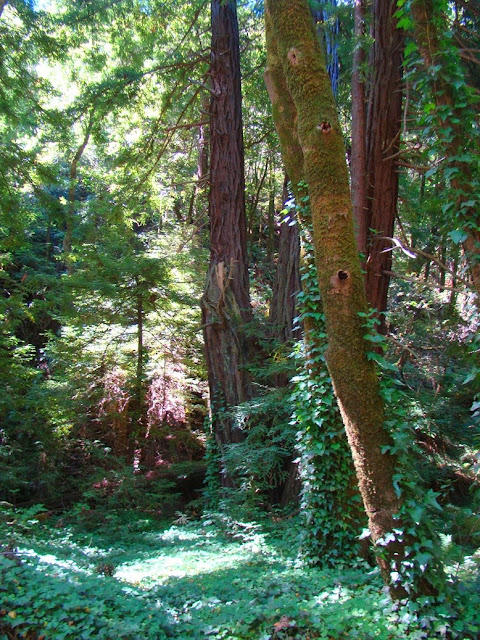 In any case, there is a beach along the Big Sur Coast. That is actually rather extraordinary, given the way that the mountains rise from the sea. In most places there are steep inaccessible cliffs. Beaches can only form where sheltered coves allow sand to accumulate, sometimes at the deltas of creeks and rivers. The beach we are exploring today is Pfeiffer Beach, a section of coastline in the boundaries of Los Padres National Forest, but managed by the California Coastal Conservancy (I admit I've never understood how the federally-owned national forests of Big Sur were never made into national parks).

There is a modest amount of parking available, and simple toilets (which is one of several possible explanations why the beach is so well hidden; it would be overwhelmed by crowds). The beach is just a few hundred yards down a sandy trail. 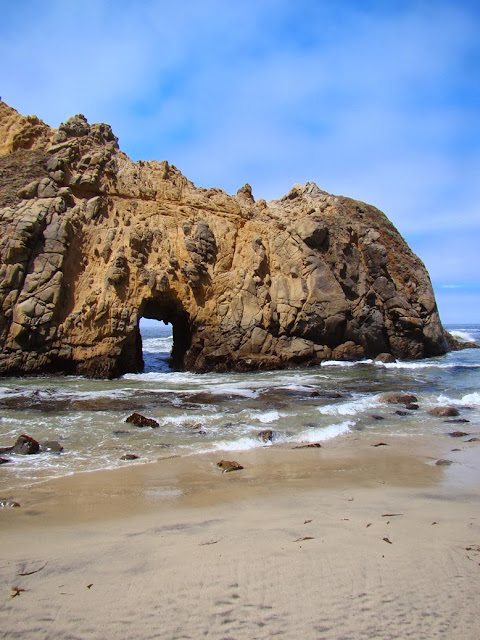 The very modest creek in Sycamore Canyon doesn't seem a likely candidate for producing enough sand to support a permanent beach, but some sand may be drifting along the coast from the north. The rocky sea stacks on the outer part of the beach provide an explanation for the accumulation of sand at Pfeiffer. They break up the wave energy so only relatively small waves ever impact on the beach. The sandbar is termed a tombolo, though it is not so perfect as to be a textbook example. A tombolo is a sandbar that connects an offshore sea stack with a coastline (look for a textbook example in a near future post). 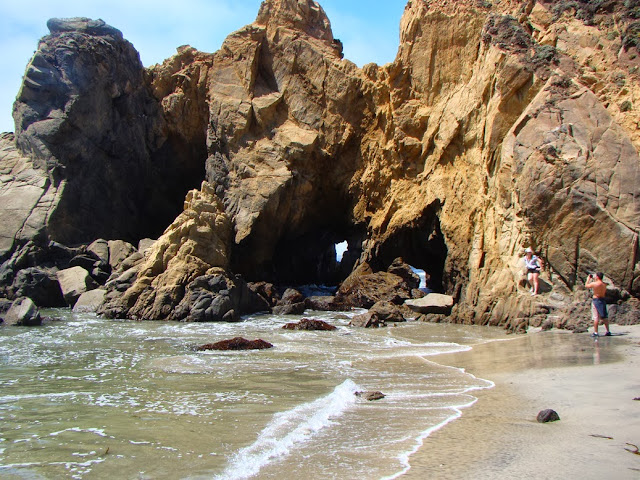 The rocks include graywacke and metavolcanic greenstones of the Franciscan Complex. They formed in the guts of a subduction zone/trench system, and as such have been churned and mixed. The sea stacks are constantly pounded by the surf and have produced a group of sea arches visible from the beach. 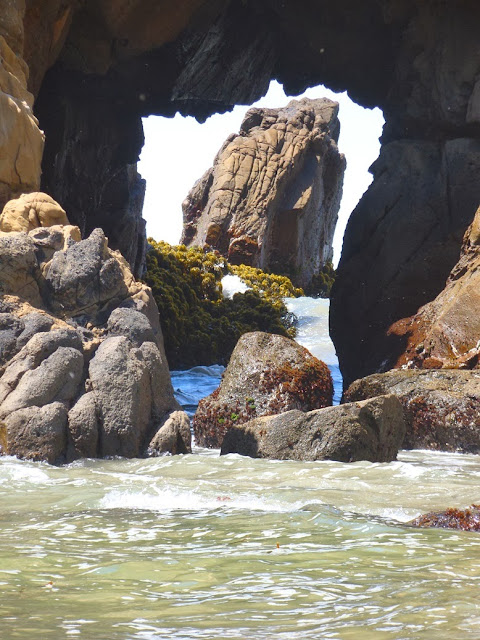 The rock isn't right, but doesn't the shape of the hill in the picture below recall Diamond Head in Oahu, Hawaii? It's just missing a long string of high-rise hotels, and what a shame that would be here on the Big Sur coast. 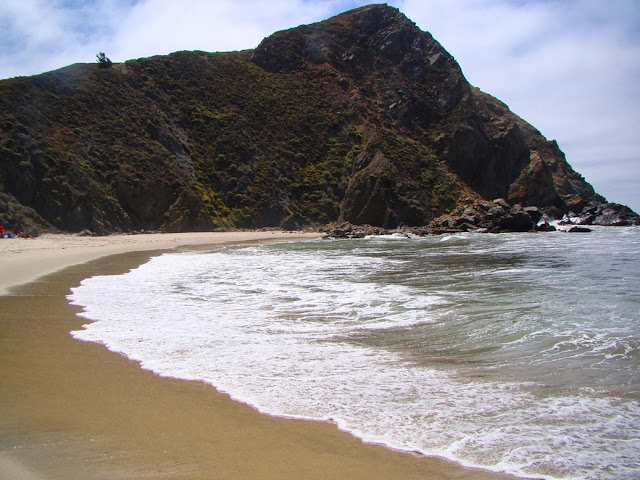 From a more southerly vantage point on the beach, the tombolo is a bit clearer, connecting the sea stack on the left with the coastal cliffs on the right. The scrub covered slopes also hide some biological treasures (see page 18 of the road guide): the site includes the southern range limit for Little Sur manzanita, the rare Monterey Indian paintbrush (Castilleja latifolia), bear grass (Xerophyllum tenax); and the northern range limit for California peony (Paeonia californica). Not that I knew what I was seeing... 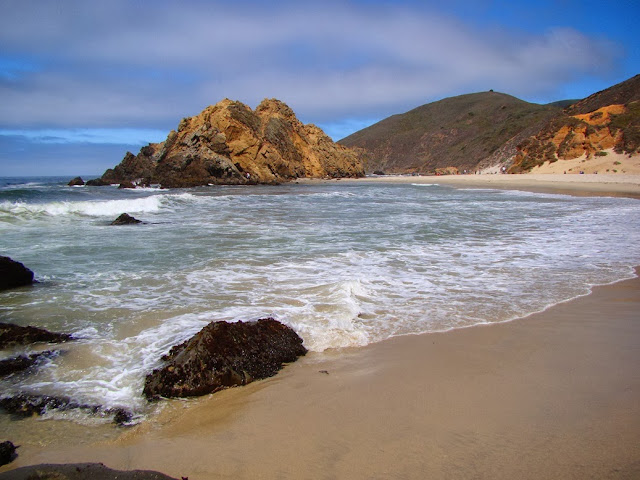 One more notable feature of Pfeiffer Beach is the purple sands. The beach sand is mostly composed of quartz, but streaks of the purple sand can be occasionally found. The color comes from the presence of grains of garnet in the sediment. I've now seen red, yellow, white, black, gray, purple, and green sand beaches. 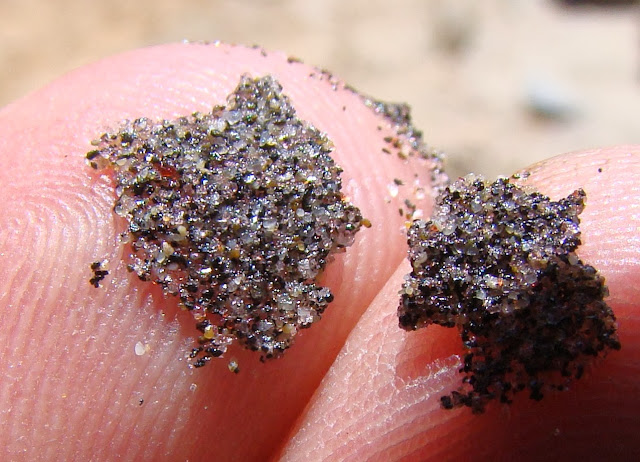 See my previous posts for an explanation of the Sierra Nevada connection.
Posted by Garry Hayes at 4:36 PM

This is also a lovely beach on which to propose. A calamitous rock fall on HWY 1 prevented me from getting to my original, even more secret beach further south. While chatting-up a Cal Trans worker that had just closed the road (as I frantically tried to make a back-up plan for a proposal) we got to see a boulder the size of three pick-up trucks break loose from the top of the slide, roll about 600ft downhill, hit HWY 1 square in the yellow line, bounce nearly 30' in the air and do a perfect swan dive into the ocean another several hundred feet below. Our marriage between two geo geeks was meant to be.

What a great story!

My sister and I visited Pfeiffer Beach when we were in California a few years ago. You're definitely right when you say it isn't the easiest beach to find. We drove past the turn at least twice before we figured out where it was. The purple sand was impressive though, as was the sunset.