"Another Earth" showing at the State Theatre, Modesto on Nov. 10 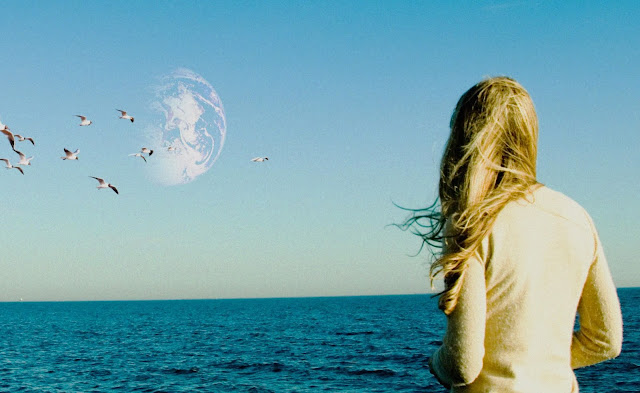 What happens if you meet yourself? What would you have to say?

To all of my Modesto area readers: I want to let you know about a great film series going on at our historical State Theatre in the downtown area (1307 J. Street). Science on Screen pairs films with a plot that includes a scientific component with experts in the field. Last month we paired "Spiderman" with a spider expert, with some very cool live arachnids in the lobby. This Sunday we are screening the movie "Another Earth", and our speaker will be Dr. Jim Hetrick, professor and chair of physics at the University of the Pacific (UOP) who will discuss the physics and astronomy in the film.

Another Earth stars William Mapother (Ethan in "Lost"), and Brit Marling (who also was one of the screenwriters) in a drama set at the time of the discovery of another Earth that might be a near exact match to our own planet. The planets in parallel Universes were identical up until the moment they became aware of the existence of the other. Tragedy at the time of discovery might not have happened on Earth II. Maybe.

The film was the first for director Mike Cahill, and when screened at the Sundance Movie Festival, it received a standing ovation and several accolades, including the Alfred P. Sloan Prize for "focusing on science or technology as a theme, or depicting a scientist, engineer or mathematician as a major character."

The State Theatre in Modesto is a wonderful 1930s vintage movie house that recently underwent a complete renovation. It is a marvelous place to watch a movie and other shows. We will have displays and activities in the lobby prior to the movie, which starts at 3:00 PM. The doors will open at 2:00.

Science on Screen is supported by a grant from the Alfred P. Sloan Foundation, and is a local effort to increase science literacy in our region. I've been on the steering committee for the last year and a half. It's a great program. I hope that my friends and readers in the area will take advantage of this great opportunity and come out for the show! More information can be found at the facebook page for the State Theatre at https://www.facebook.com/events/1426917090862479/. The website for the State Theatre at http://www.thestate.org/.

We have three more films in the Science on Screen series for this season: Whale Rider will screen on Sunday, January 12, Blue Butterfly on March 9, and Avatar on March 31. We also have a special program on April 13, Physics and Fastballs, a presentation by a recently retired Exploratorium expert on America's greatest sport (yeah, argue all you want).

Glad to read this - I definitely want to see "Another Earth".