The Other California: Geologists Who Live on Glass Mountains Shouldn't...(fill in moral) 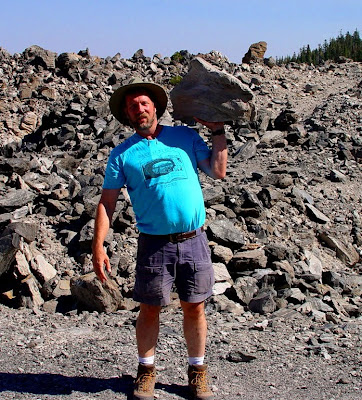 Oh, come on, who of you hasn't done the manly-man or womanly-woman thing when confronted with a mountain of pumice boulders? That's one of the cool things a person can do when visiting one of California's unknown corners, Medicine Lake Highland, the biggest volcano in the state.

In the previous post about the volcano, we were exploring the varieties of non-viscous basaltic lavas, the so-called a'a and pahoehoe flows. Basalt is a silica-poor volcanic rock that is usually derived from melting below the crust in the earth's mantle. In places like Hawaii, basalt is essentially all one will find. Medicine Lake Highland sits on silica-rich continental crust, and hot magmas rising from the mantle mix and melt the continental crust, forming a variety of more silica enriched lavas, such as andesite or rhyolite. These are the lavas that lead to the distinctive nature of the Medicine Lake Volcano. Several unique kinds of volcanic cones dot the summit region of the volcano, including Glass Mountain, shown in the pictures below (and above, for that matter). Glass Mountain is also the youngest volcano on the Highland, having erupted only 950 years ago. Note how few trees have gained a roothold on the new rock. 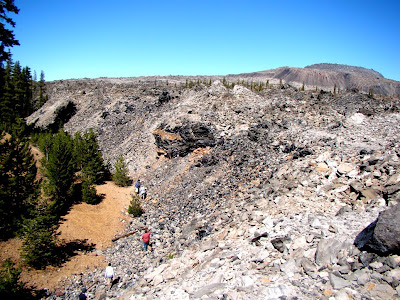 The silica molecules that make up much of rhyolite magmas tend to stick to each other, forming polymers, and making the lava very viscous (sticky). Atoms can't move readily and the cooling lava tends to form glass (disorganized atoms) instead of a crystalline rock. Natural volcanic glass, as many of you know, is called obsidian. This is the material used by early cultures to make spearpoints, arrowheads and other tools (it makes a sharper edge than metal and is used in surgical scalpels today). Glass can form from other lavas like basalt or andesite as a result of sudden quenching, as in water, but such glass tends to be only on the surface of the rock.
Is the foam on a mug full of root beer actually root beer or is it something else? Of course it is root beer, it just has a lot of airholes in it. Pumice has the same relationship to obsidian. It is also volcanic glass, only it has a lot of gas bubbles in it. As such the rock has very low density so that it can float for one, and out-of-shape middle-aged geologists can pretend to be really strong hefting it around for another. The two rocks are found in abundance at Glass Mountain.
The rhyolite lava is so viscous that it rarely flows at all, and instead builds steep rubble-covered cones called plug domes or silica domes. Glass Mountain is a prime example (on the right skyline in the photo above), but it includes some flows as well (below). In class, I describe the behaviour of the lava as being like toothpaste being squeezed straight up so that it just kind of flops over. 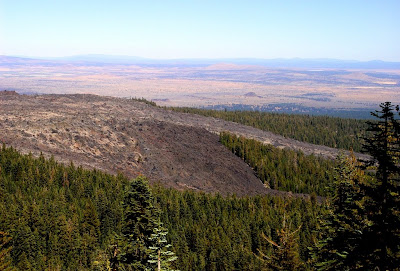 Glass Mountain is high on the east flank of Medicine Lake Highland, and nice views can be had of the Modoc Plateau in the far distance. Getting to the plug dome requires travel on some dirt roads with a few confusing junctions, but get a national forest map and follow the signs, and normal cars can get there with no problem (it is stop 4 on this sketch map). There is a rough access road that allows people to hike over the extremely rugged surface, but be forewarned: the glass is very sharp and unforgiving. Almost every field trip I take there results in a few bloody cuts. The pumice has been mined in the past, and the mine claims are current, so there are "no rock-collecting" signs here and there.
There are several plug domes in other parts of California, most notably in the Mammoth Lakes area and on the south shore of Salton Sea, but Medicine Lake Highland is one of the best places (in my opinion) to explore these fascinating landforms. Check it out!
Next: walking inside volcanoes!
Posted by Garry Hayes at 10:57 PM

Of course one must heft a HUGE piece of pumice when given the opportunity. Mine was at Mt St Helens.
I've seen frothy and glassy layers combined along the Sultan Sea. Now I understand.
Great post Garry.