Too Much Dam Hubris...Lake Powell and the Future of the Colorado River 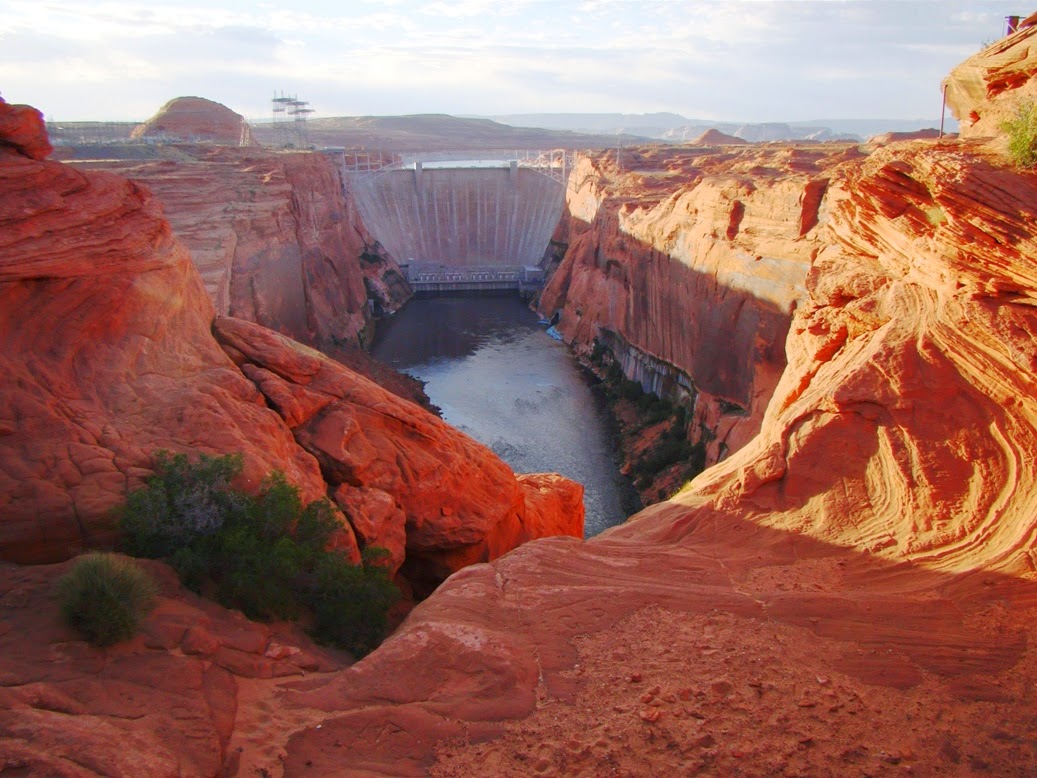 The Colorado River is a wonder of nature. Starting from glacial cirques high in the Rocky Mountains, the river flows through one canyon after another, culminating in the grandest canyon of them all, the Grand. For 1,450 miles, the river is a corridor of life, and webs extend out in numerous directions, providing life in some unlikely locations, like Las Vegas, Los Angeles, and Phoenix. Irrigation from the Colorado grows vast amounts of crops in desert valleys throughout the southwest.

The river has exposed an incredible geological story, and has played an important part of my life in my development as a teacher and geologist. It was a catalyst in my own life as I explored a corner of it on my first geology trip, and more recently as I floated a raft through the Grand Canyon for the first time last summer. So it is that I feel a little bit of ownership of the river (along with about 35 million other people). 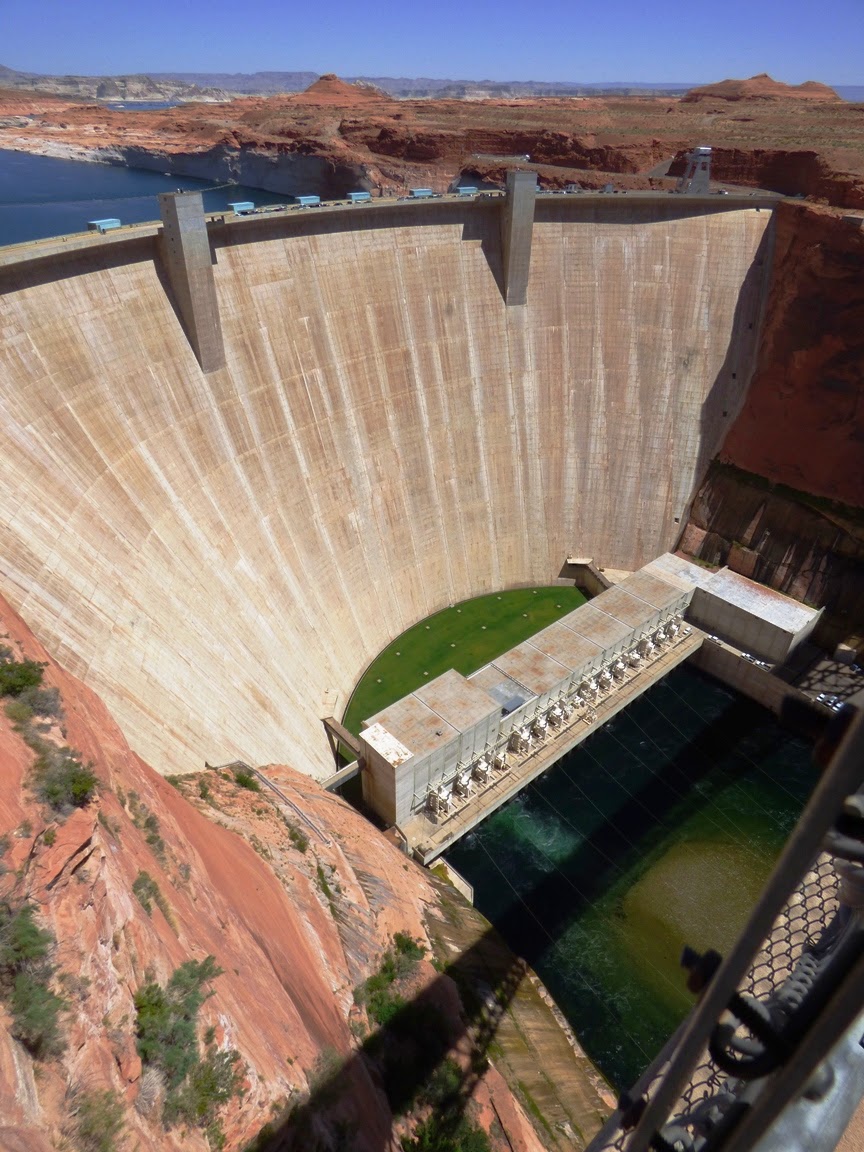 I first became aware of the abuse of the river system as a teen when I came into possession of a dogeared copy of On The Loose, by Terry and Renny Russell, which was in part a eulogy for the canyons that disappeared beneath the stagnant waters of Lake Powell, backed up behind Glen Canyon Dam. I had grown up learning of the giant mega-dams as the greatest achievements of mankind (did anyone else get taught "Roll on Columbia, Roll on" while in grade school?), and I was duly impressed when I saw Lake Mead and the newly completed Glen Canyon Dam when I was a child on vacation. I started to learn that there were more issues at stake in regards to these giant mega-dams. Yes, flood control. Yes, cheap renewable clean energy. But at the cost of the some of some of the most amazing scenic canyons in existence, and at the cost of an entire river ecosystem. I know that those arguments don't hold much sway in a capitalistic society that measures the value of something in dollars earned. The thing is, the main purpose of these dams is imperiled by changing climate. One has to wonder if they were a gigantic mistake in the end. Do the benefits truly outweigh the costs? 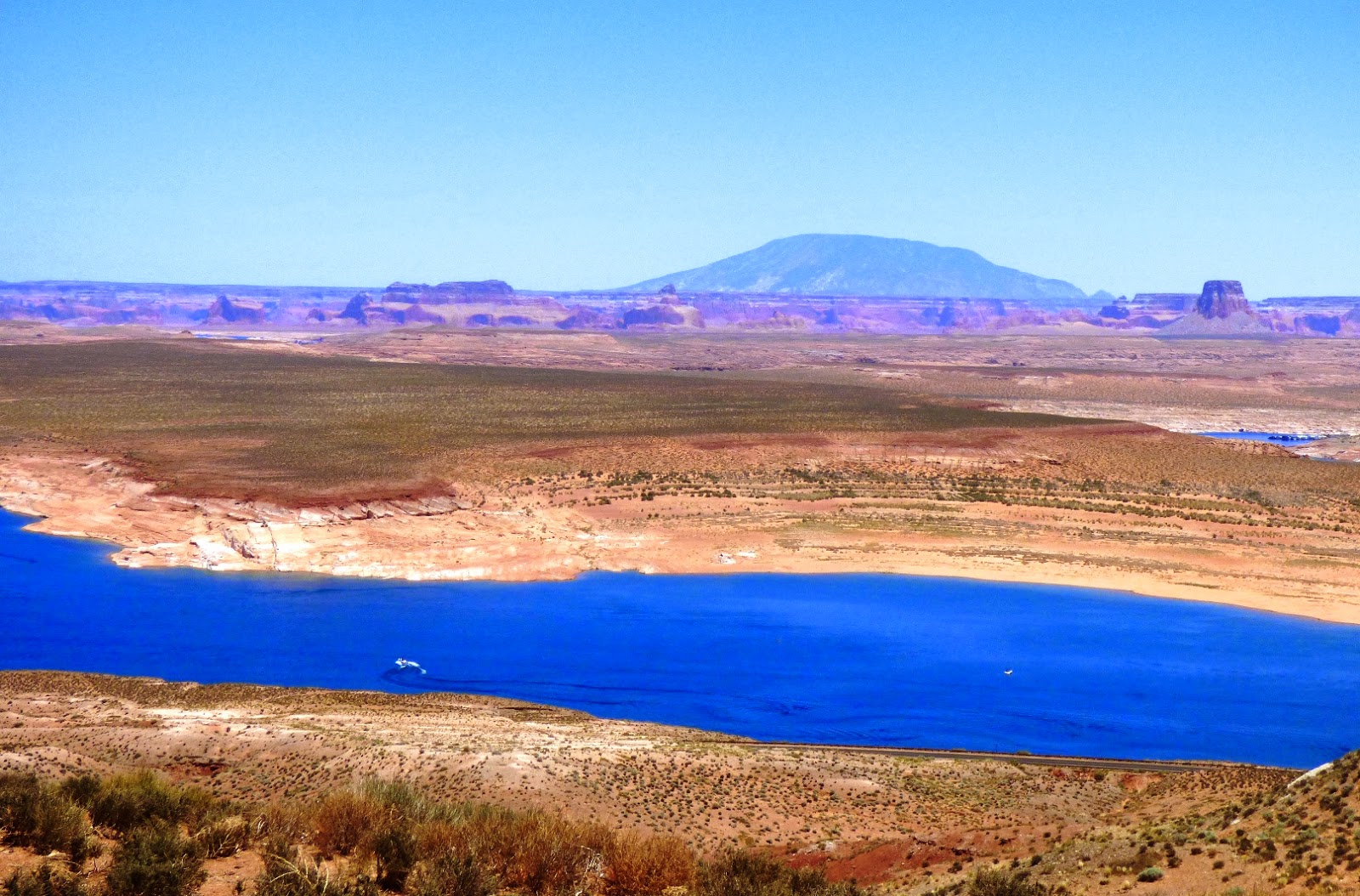 One of the most incredible stories of Glen Canyon Dam is that it came perilously close to failing during an extraordinary runoff event in 1983. I've covered this story in the past, but it bears repeating (especially if you not familiar with it). Instead of using floodgates and spillways at the top of the dam for emergency drainage, designers utilized the diversion tunnels used to channel the Colorado River around the dam site during construction. They proved woefully inadequate to the task in 1983 as cavitation caused the walls of the diversion tunnels to rip out. In places the powerful flow of water cut 32 feet (10 meters) into the soft Navajo Sandstone and threatened the structural integrity of the dam itself. The diversion tunnels had to be shut down, and the lake threatened to flow over the crest of the dam in an uncontrolled fashion. This could have led to catastrophe, as such uncontrolled flow could have eroded and weakened the sandstone abutments of the dam. Failure of Glen Canyon dam would have led to the domino-like destruction of other large dams downstream, and the decimation of the water-supply infrastructure of some thirty million people. The disaster was averted by the construction of an 8 foot high dam of wood flashboards that held back the water long enough for the flood to subside. The structural integrity and survival of the dam came down to about one inch...the distance between the water level and the top of the flashboard dam in 1983.

There is an inherent conflict between water storage for irrigation and energy production, and flood control. One requires a reservoir to be mostly full; the other requires sufficient storage space for unusual events like those of 1983. The conflict requires a balancing act on the part of the water masters. Getting the balance wrong can lead to catastrophe downstream.

The scary part is that the 1983 event was not actually all that unusual. It happened because of a lack of storage space in the reservoir at the time (it had filled for the first time ever in 1980). The flooding involved flows of over 111,500 cubic feet (3,160 m3) per second. This was statistically a 25-year flood, one that has a 4% chance of occurring in any given year. Unfortunately, the statistics that guided the design of the dam have been called into question because of analysis of flood deposits upstream near Moab, Utah. New research suggests that there have been more than 40 large floods in the last 2000 years. Of these, 34 exceeded floods expected to strike once a century (20 would be expected under the old models), and 26 were larger than the so-called 500-year flood (only four of these would be expected under the prevailing models). Two of the floods were monsters that exceeded the design standards of the dam, even with the enhancements added after 1983. 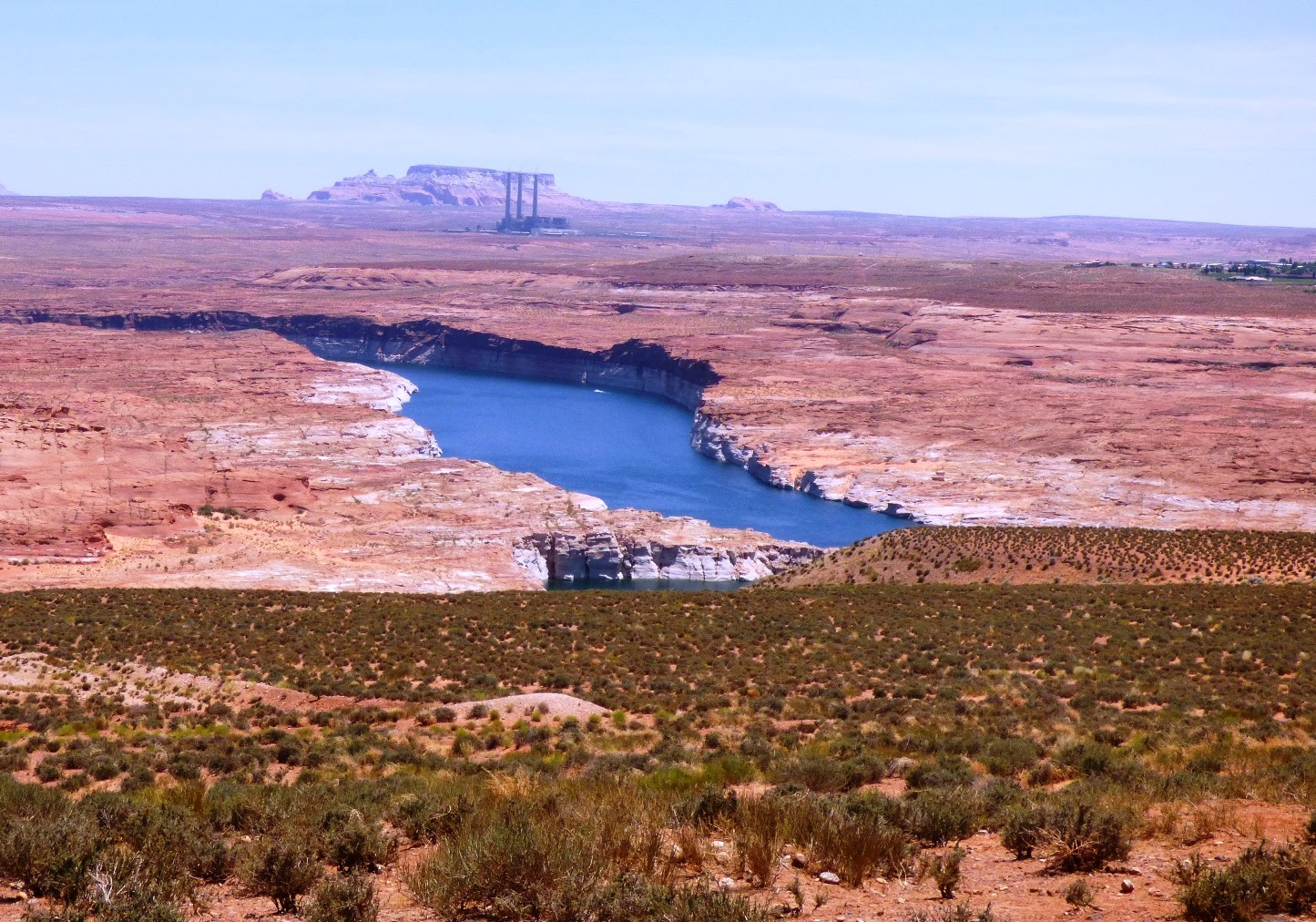 At the other extreme of dismal news is the ongoing drought, 13 years and counting. The lake is hovering around 50% of capacity, and is expected to rise only modestly this year despite good snow conditions in the Rocky Mountains. We may be at the point where we are depending on the occasional El Nino event just to maintain a usable amount of water in the reservoir. There are some who think the reservoir will never have enough runoff to ever fill again.

All in all, this calls into question the wisdom of trying to control such a variable and unpredictable river. And we haven't even dealt with the question of sediment infill. The giant mega-dams are filling with silt at an astounding rate that is shortening their useful life. Ultimately our gigantic engineering projects will give way and the river will once again be in control. It's happened before with gigantic lava flow dams and blockages like Hoover Dam and Glen Canyon Dam will also give way.

Such were my thoughts as I stood on the hilltop overlooking this "mighty work of man". We hit the road again, headed towards Grand Staircase-Escalante National Monument, the largest single park on the Colorado Plateau.

Thanks to Wayne Ranney over at Earthly Musings for the heads up on the recent Colorado River research!
Posted by Garry Hayes at 10:38 AM

Is there anything done about the sediment? Or are the amounts to large to be able to deal with it?

The amount of sediment carried by the river is astounding, and it would be expensive in the extreme to even think of trucking it anywhere. I once heard it described as carrying sediment in a line of dump trucks traveling 20-30 mph bumper to bumper. The amount of energy required would be probably far more than could ever be generated by the dam itself.

I've been thinking about the trade-off between water and preservation for years.

I've come to the conclusion that we're going to see more and more natural areas dammed to keep the population in water.

The only hope of preservation of natural sites is a curb on population, which hasn't happened in my lifetime, despite the warnings 50 years ago.