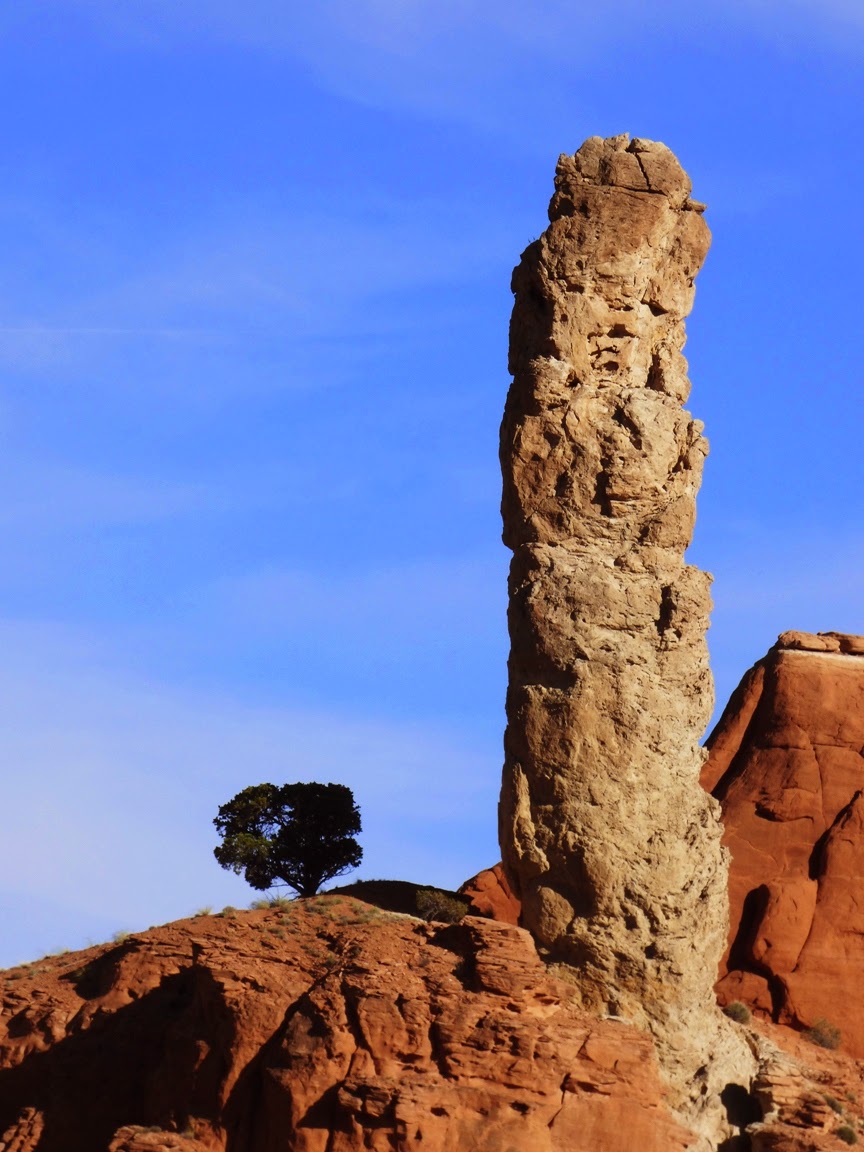 There was a time not all that long ago when there was a part of the United States mainland that was still considered terra incognito. It was in 1948 that National Geographic explored this region and called it not a tour, but an expedition, complete with jeeps and supply caches, and explorers who gave new names to features, even though many of them already had been named by the resident ranchers. 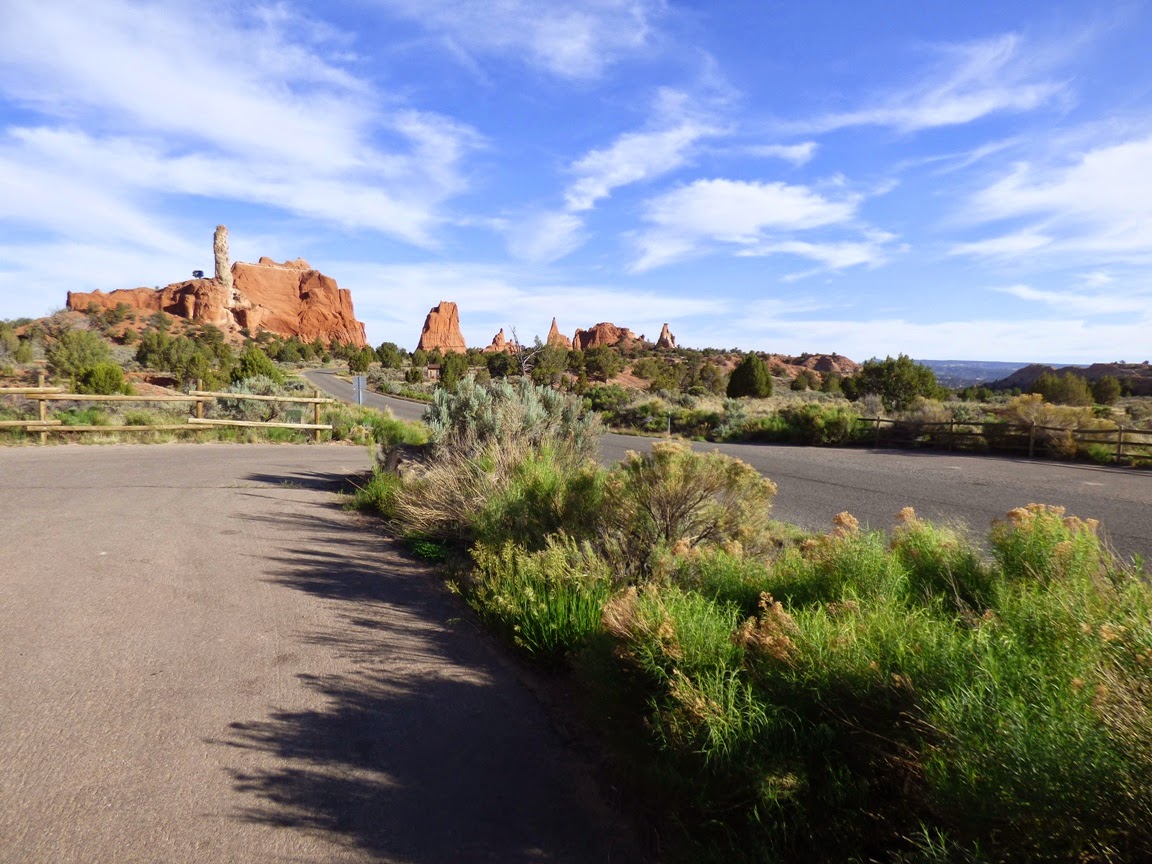 Kodachrome Basin State Park (once called Thorley's Pasture) in southern Utah showed up at the end our our 40 mile gravel road journey through what I called a land of strange standing stones (it's also accessible from the north by a paved road out of Bryce Canyon National Park). For the second time in a day we were treated to the strange sight of vertical pillars of stone, but these had an origin quite unique from the spires along  Cottonwood Wash Road. It's an origin so unique that geologists haven't quite decided what it actually is.

The spires, called sedimentary pipes, are composed mostly of a mix of sediment from the lower members of the Carmel Formation that have penetrated into the overlying Entrada Sandstone. There are more than five dozen of them in and around the park, ranging in height from 6 feet (2 m) to 170 feet (52 m). They are composed of a more highly cemented rock, having been exposed as the surrounding sediments were eroded away It has been suggested that they are the result of hot spring activity, and that they might have been pathways for geysers (some have suggested that the park is sort of a Yellowstone in reverse). This is an intriguing and imaginative idea, but what was the source of the heat? There are no magma intrusions in the immediate region, and in other parts on the Colorado Plateau where intrusions do occur, such pipes aren't found. 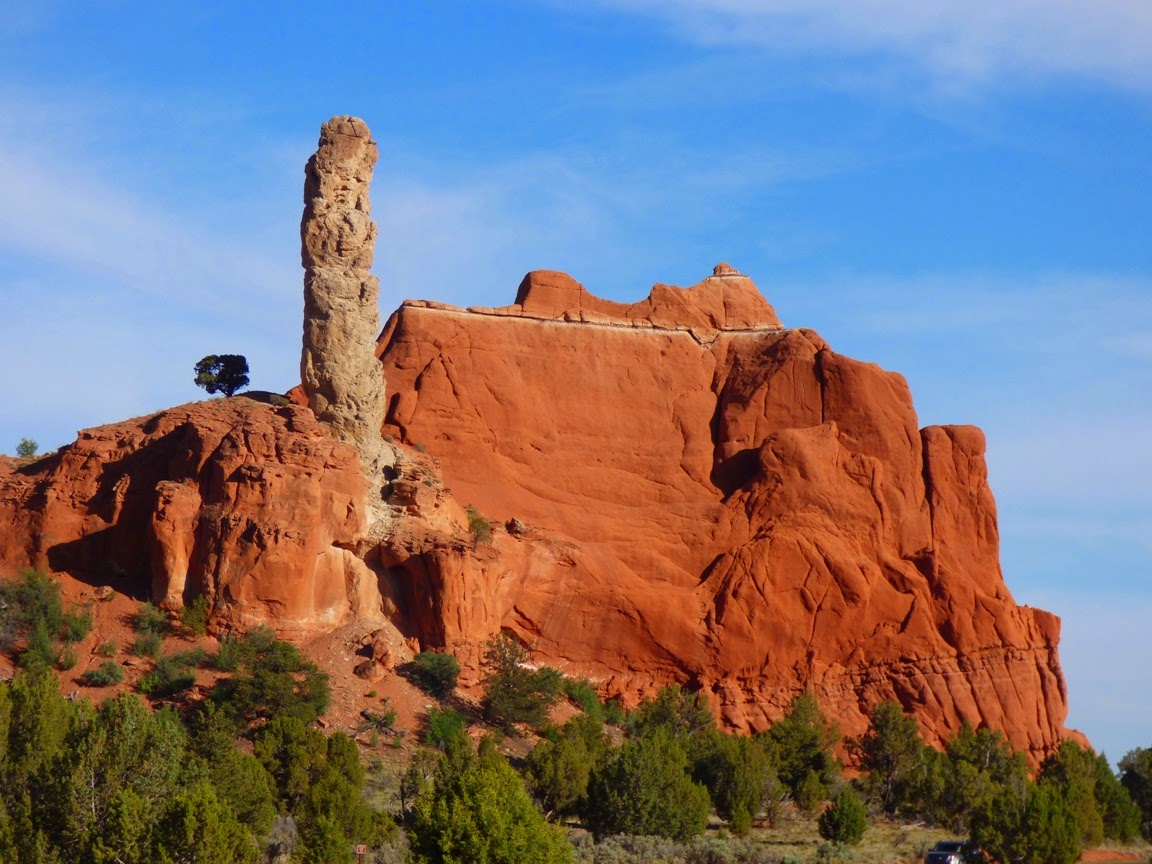 Another possible explanation is that the pipes are liquefaction features, places where water rushes towards the surface from saturated layers below during the shaking from earthquakes. I like this explanation, since there are some major fault zones just a few miles away. But researchers say there is a time problem. They say that the pipes are very old features: they don't penetrate the overlying Henrieville sandstone, and are therefore probably Jurassic or early Cretaceous in age. The faults in the region didn't become active until less than about 15 million years ago. Maybe.

The most recent hypothesis is that the pipes formed from lenses of groundwater trapped in sabkha deposits, layers of evaporites like salt or gypsum along arid environment shorelines, which formed the Paria member of the Carmel formation. As younger sediments were laid down on top of the older layers, the pressure grew in the groundwater deposit, and water squeezed out, following the path of least resistance, generally upwards. This model is interesting, but has it been seen in other settings? Some of the petroleum geologists that have traveled with us find this to be a  plausible explanation. 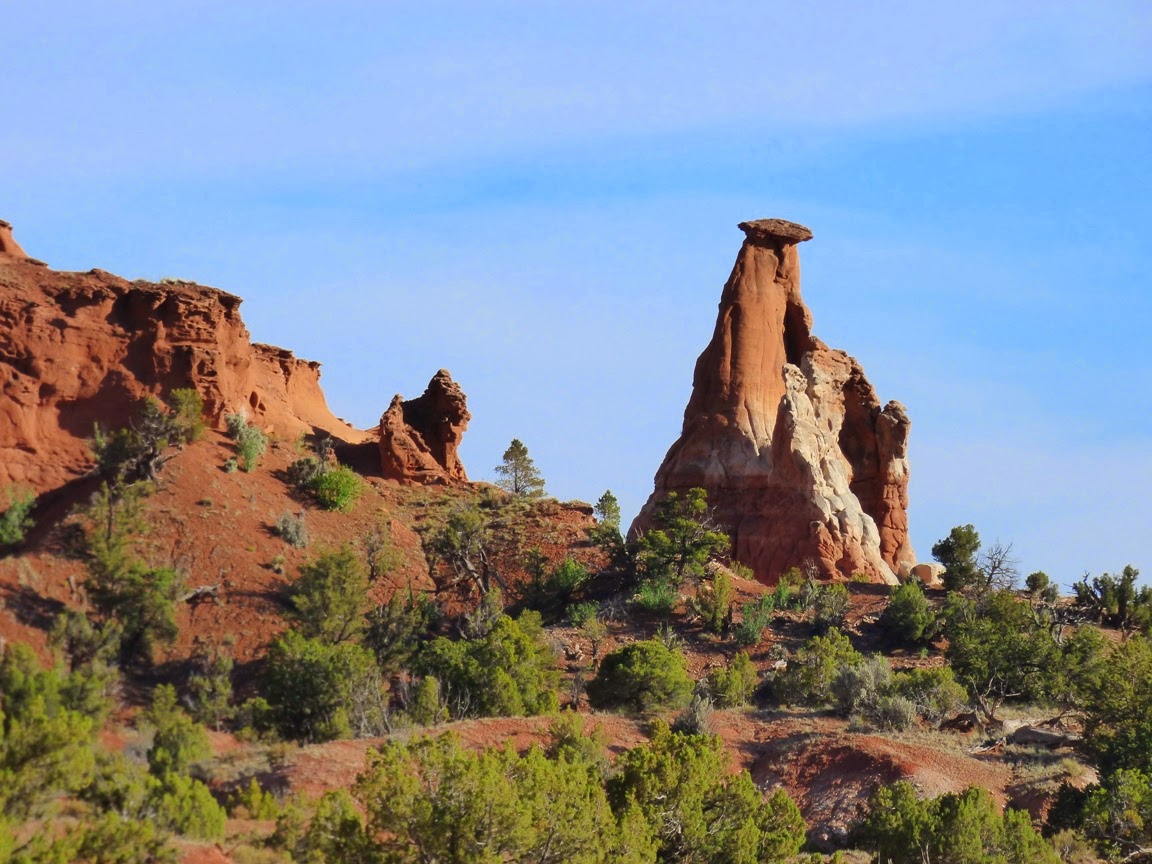 But aren't mysteries great? Like the origin of the Grand Canyon, science thrives on unanswered questions. It's a fascinating place to visit and explore. 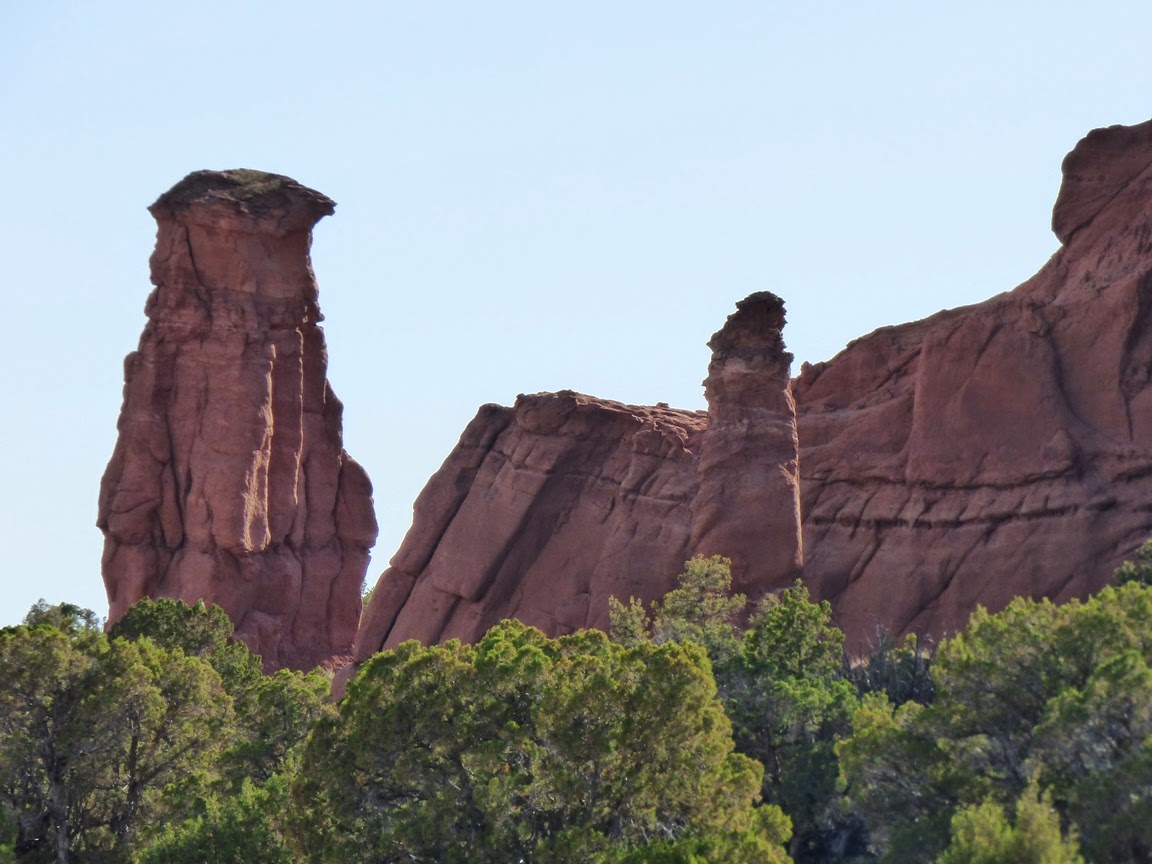 The sediments in which the pipes occur are mostly members of the Jurassic Entrada formation, which is responsible for some spectacular scenery in other parts of the Colorado Plateau, most notably at Arches National Park and Goblin Valley State Park. The bright orange layers are the Gunsight Butte member, while the high white and red striped cliffs are the Cannonville member, and the light tan layers are the Escalante member. The highest cliff ramparts are composed of Cretaceous Henrieville and Dakota sandstones, last seen at Grosvenor Arch. 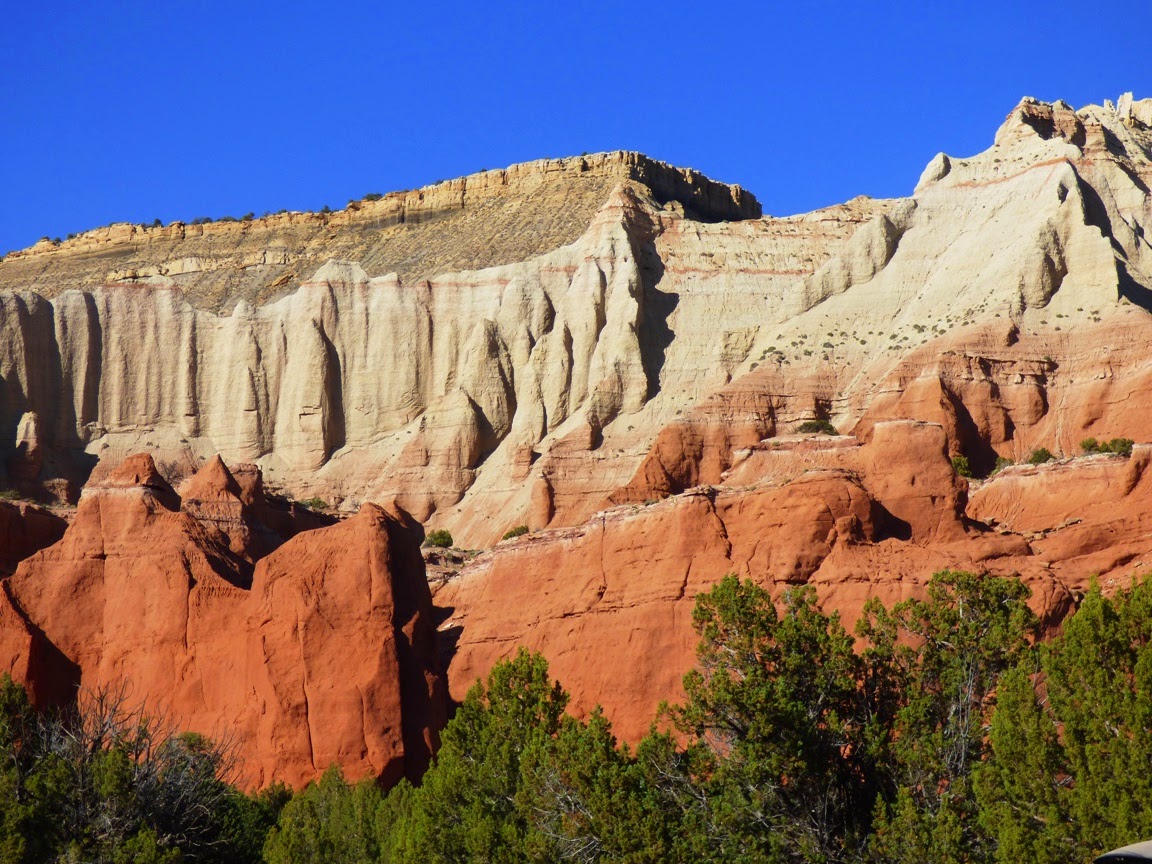 Get the park brochure here: http://static.stateparks.utah.gov/docs/kbspNewsBrochure.pdf

An incredible landscape for sure. Pretty much anytime I hear of this area I think of the Paul Simon song