A bit of whimsy, but also a moment of unspeakable sadness. I was in Southern California for family matters, and we nailed a campsite, the last one available, at Doheny State Beach near Dana Point. Of course, I was looking at the rather fascinating geology exposed in the cliffs, but I was on the lookout for new bird species as well. I was photographing a Blue Heron along the San Juan Creek estuary when a disturbing thing happened nearby.

Boys were throwing rocks at something, though what it was did not register with me right away. When I heard one of them say "well, you got it, now you gotta deal with it", I started paying closer attention. I realized they had injured a large seabird, which I learned later was a Caspian Tern. The boys lost interest and rushed off before I could confront them (and I was pretty angry). It was unable to walk or move. 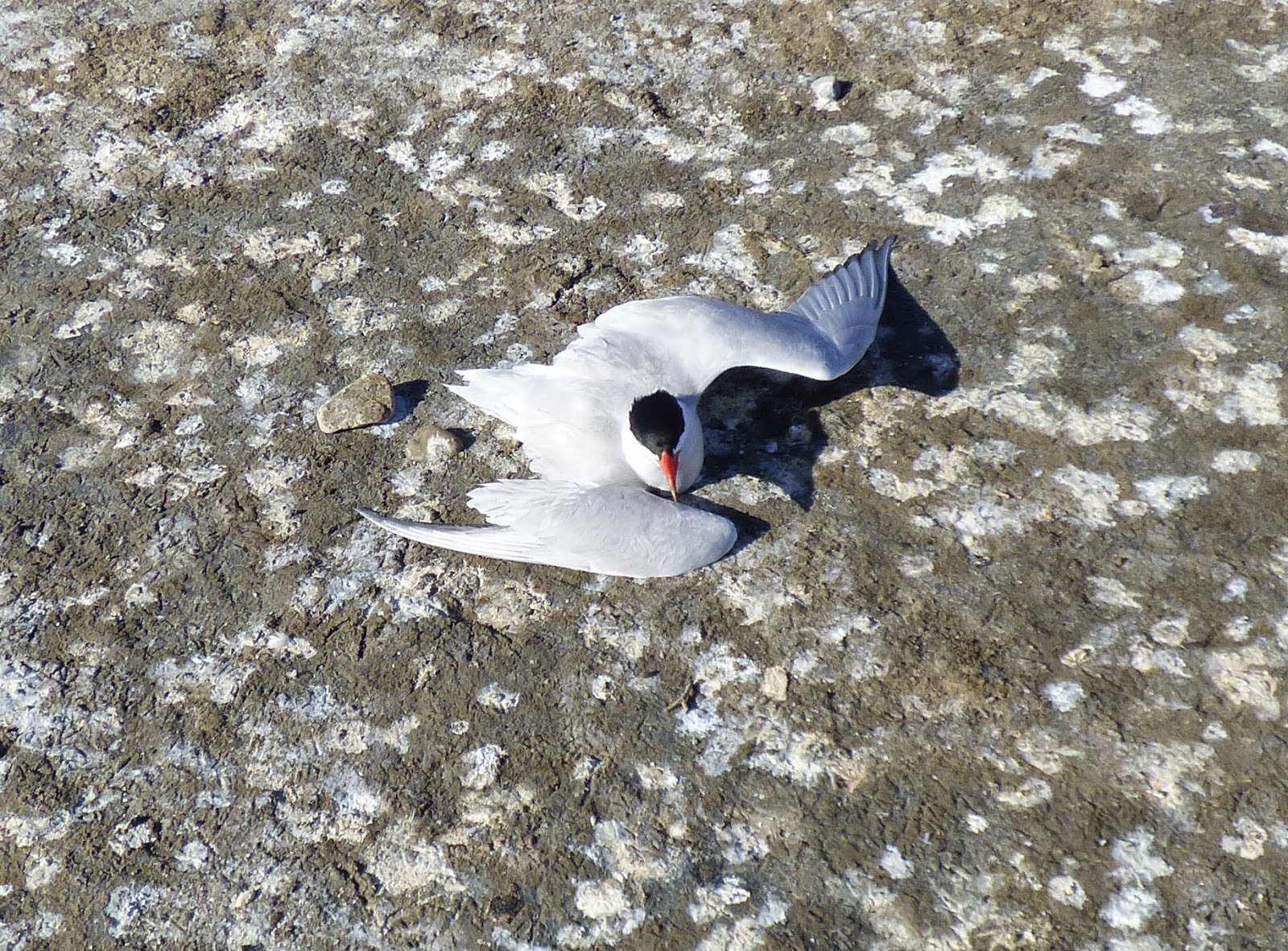 How can you explain the stupidity of people? I mean, sure, they're teenagers and that explains much, but how do you explain the cruelty that causes kids to throw rocks at birds until they injure it, stare at it for awhile, and then wander off and go swimming in the surf? It's not enough to say "boys will be boys". That's what they say about rape, too. There's something pathological here. 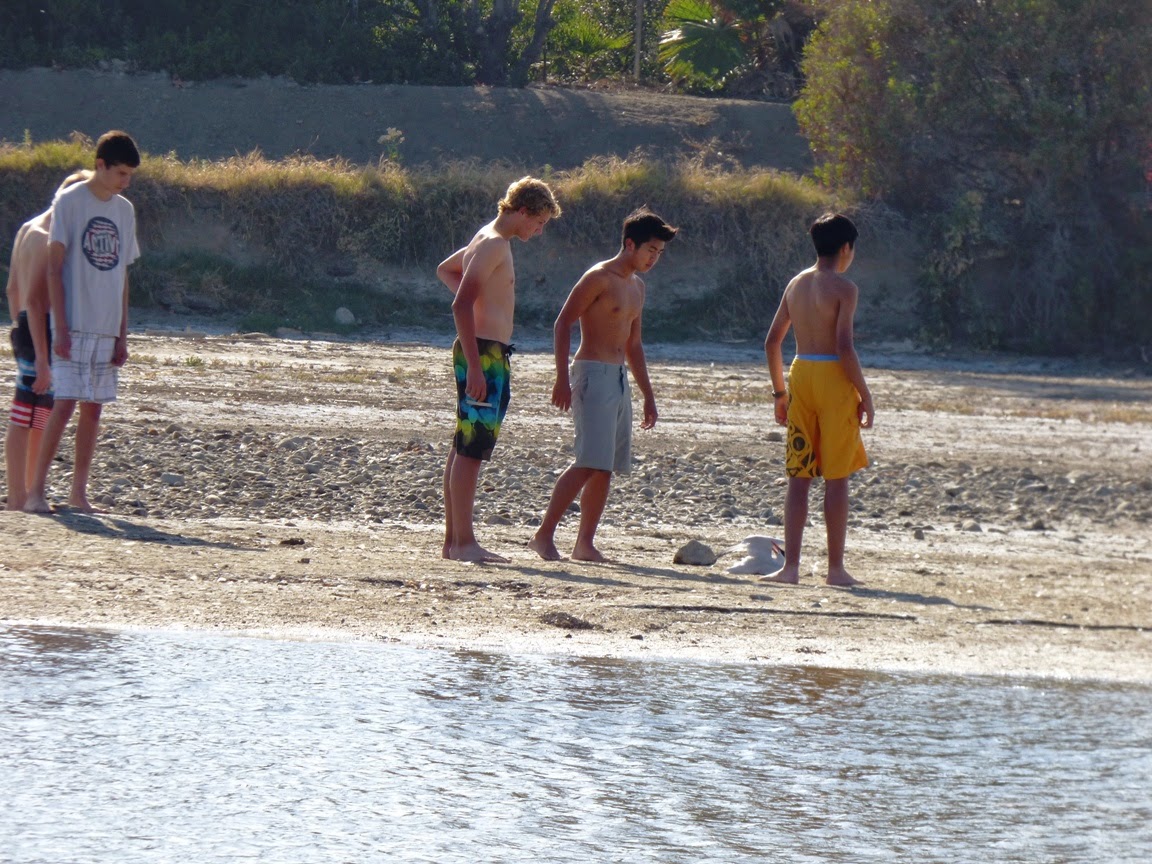 This isn't a rant about "what's wrong with kids today?". It's about the coarseness of a society that regards killing as a casual thing, whether it's in movies, video games, at the end of a trophy hunter's rifle, or a drone indiscriminately destroying people at a wedding who have been labeled as terrorists. It's a society that has had so many school shootings that most of them barely make the news anymore. It just made me sick.

I contacted the park authorities, and someone eventually came and took the bird to animal control, hopefully to be healed. As to what is needed in our society? I have no idea.

If it was up to me they would be stoned themselves. Not enough to kill them or seriously injure them but enough to give them some cuts and bruises and for it to hurt and for them to hopefully see just how mindless and cruel such behaviour is.

Unfortunately, most of this behaviour is down to the parents not teaching the kids the difference between right and wrong and not teaching them respect for others people and life.

"All that is necessary for the triumph of evil is that good men do nothing." (Edmund Burke). Thank you for speaking out.

Their behavior is disgusting and disturbing. But then in your outrage you said something that is a bit of a pet peeve of mine:

"... a society that has had so many school shootings that most of them barely make the news anymore."

And false. Point in fact, news outlets blow these tragedies out of proportion and make it seem like they happen "all the time".

Young adults had the largest increase in violence from the late 1980's to the early 1990's, but that too has been steadily on the decline (page 4 of the Homicide report).

Even rapes are on the decline, with an over 60% decline in the last decade.

All around, violence of all kinds is on the decline across the board in the United States. We are reaching 50-year lows in every category.

So why this perception that our society is super violent and unsafe? Well, the few incidents that do happen generate a ton of ratings on T.V. and in newspapers. So the media focuses on those stories and other tragedies (see the 24/7 coverage of the Malaysian plane despite no actual new information about it).

My rant's over! :) Just hear that our society is doing so terribly and is so violent, yet its safer now than it's been since the late 1950's and early 1960's.

Young humans are violent creatures. I don't think this is anything new. As we grow out of our teens and early twenties we begin to become more civilized.

Sometimes we learn about life early. I was given a BB gun when I was young. I didn't take long before I shot a small bird. I was proud of the shot, but when I realized I had just killed an living creature for no reason at all, I felt ashamed. I couldn't eat it, I couldn't stuff it and it wasn't hurting me in any way. Yet I killed it.

After that I never killed an animal again without good reason, like ending suffering.

I like to believe that I learn from my mistakes. Even the ones I made when I was young.

I see on TV a lot of people like killing animals. Some for no reason other then the joy of killing. That too makes me sad.

Peter Hewson, not every category. Spree killings are not going down. They are staying flat, or increasing depending on how they are categorized.

One of the reasons crime is decreasing (it's thought) is that we are getting older. Young people are violent, often thoughtless creatures, barely civilized at all.

I don't watch TV news, I despise it since it's become so terrible. few facts, lots of opinion and conjecture. I have an opinion, I don't need a newscasters opinion. I want facts. If they can't give them to me, they are no good to me.

Garry, first, I thank you for helping that bird. Second, I want to address the issue of the kids. What I find to be most true about parenting these days is a furthering of the 'hands off' approach to the point of ignorance. Parents, who become so too young, do not guide their children through life as much as occasionally look back to see they are still on the same trail. This detachment is pervasive in our era of island living as we discover you don't have to leave the computer to have a 'full life.' Or at least that's what they tell themselves. Kids need the village, the parent, the neighbor, the grandparent and the friend to help set their moral compass. Yet most people do not know the names of the neighbors just to their immediate right and left. When I grew up we had the names, numbers and emergency contacts for at least 10 of our immediate neighbors. We watched each other's houses, kids and cars. We spoke up when things were wrong and smiled, waved and shared meals when they were right. We took the time because we still knew people need each other to succeed. This every man for themselves society that reality TV likes to highlight with all the competition shows does not serve the greater good. I miss Mayberry - I hope we as a country find the motivation to be neighbors again, neighbors and friends. So many of us are getting older, we need to mentor the younger generation cause they have missed some important lessons.

I fully empathize with your pain and wonder at how anyone could do something like this. Something I have come recently to learn from reading lots of science articles, and I have to remind myself of this whenever I regard the actions of young people, is that the frontal lobes of the adolescent and young adult brain are one of the last areas of the brain to develop. It is here where empathy and the awareness of consequences occur. From research it has been determined that this area is still developing into the mid 20s and frequently beyond. In case of social pathology it is sometimes found that this area has been damaged or never developed fully. It is no consolation that teenagers often can't help being cruel but it might help to soften the rage.