A Land of Strange Standing Stones, and an Odd Connection to the Grand Canyon 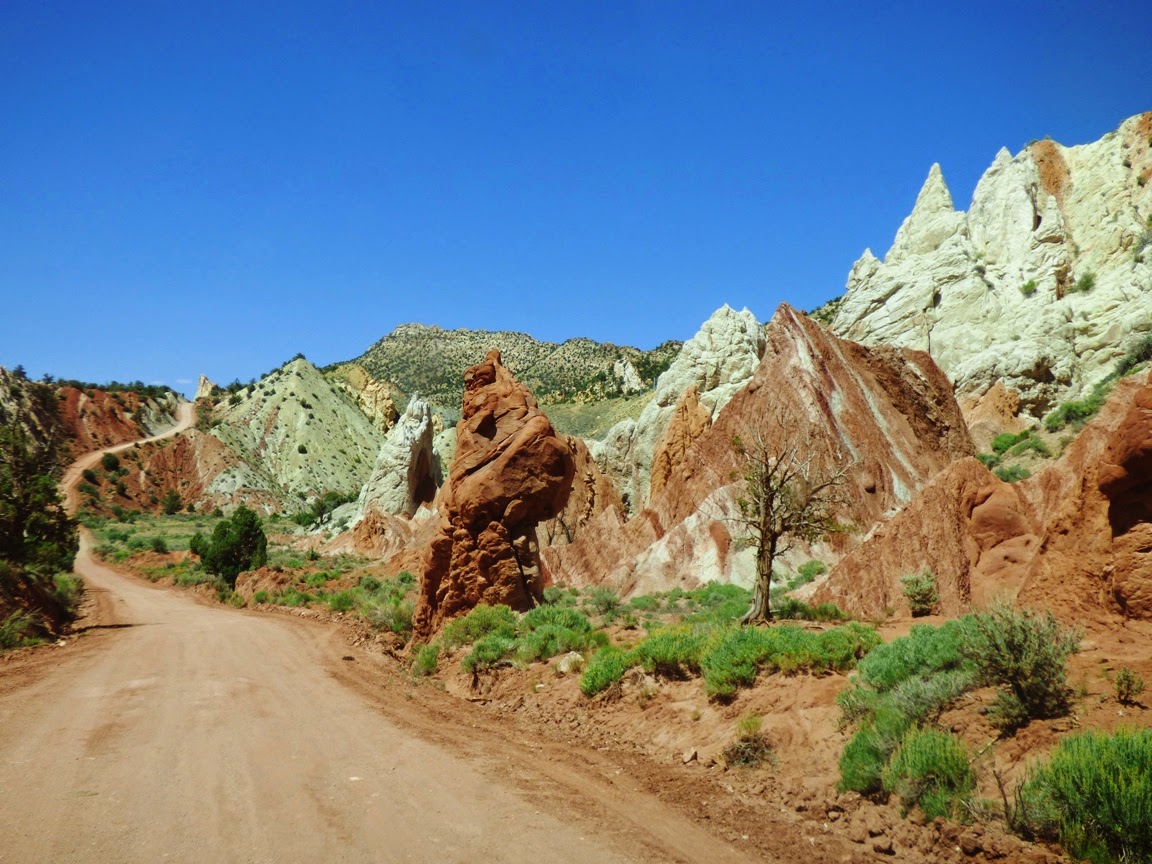 There are a lot of strange landscapes on the Colorado Plateau and otherworldly scenes. Some are famous enough as to not surprise first time visitors, such as the spires and hoodoos at Bryce Canyon National Park. But others are hidden, strung along gravel roads far off the beaten track. Seeing them for the first time comes as a shock. These rocks just aren't "normal". 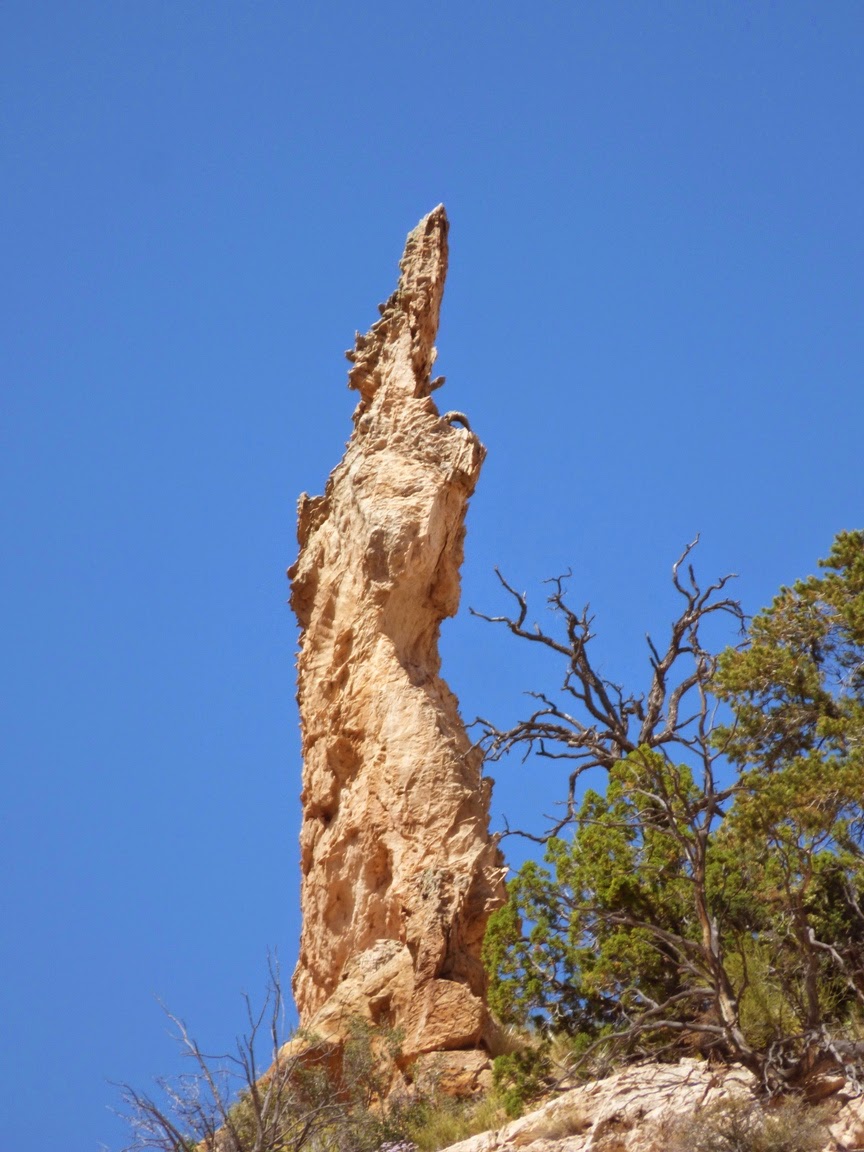 The largest single park in the Colorado Plateau region is also one of the least familiar. Really, how many of you have heard of Grand Staircase-Escalante National Monument? It covers a huge swath of land north of Grand Canyon and Glen Canyon National Recreational Area, west of Capitol Reef National Park, and south of Bryce Canyon. It was controversial in its birth, as have been most of our National Monuments, but it is indeed worthy of protection. We are only just beginning to discover the treasures that lie within its borders.

Our journey on this day would take us from Glen Canyon Dam to Bryce Canyon National Park via Cottonwood Wash Road, a gravel track that runs for thirty miles along the East Kaibab Monocline, known here as the Cockscomb.
A monocline is a step-like fold, flat on either side and flexing in the middle. Such folds often develop where fault moves beneath horizontal sedimentary layers. The Cockscomb is an extraordinary example of one of these features, with a vertical separation of nearly a mile (erosion has leveled off much of the uplifted rock, so the actual elevation change across the fold is much less). The fold is also very long. It extends for 150 miles and actually forms the eastern edge of the Kaibab Plateau where the Colorado River turns west to form the deepest part of the Grand Canyon. It formed during the Laramide Orogeny in Late Cretaceous-Early Paleogene time.
The rocks within the monocline have been twisted so much that the layers are vertical. They have also been attenuated (stretched) so that some of the layers are thinned out. The rocks have been brecciated (crushed) to some extent, which provides a probable explanation for the strange towers and pinnacles found here and there along Cottonwood Wash Road. Groundwater following the fractures would have left mineral deposits that had the effect of reinforcing and cementing some of the most deformed rocks. Erosion removed the surrounding softer rocks leaving behind the towers and spires. 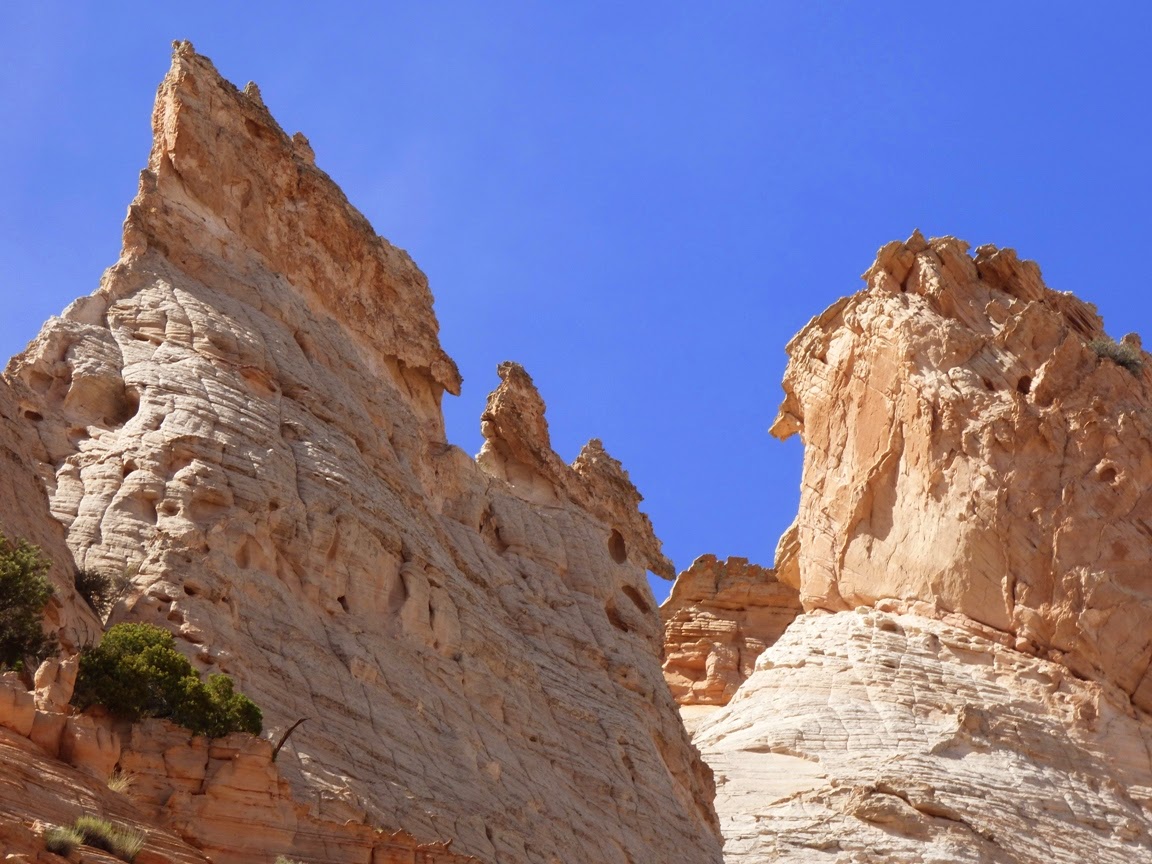 Pareidolia is the tendency of humans to build patterns out of randomness, seeing things that aren't really there: faces in clouds, and human or animal figures in rocks. Who does the rock below bring to mind? 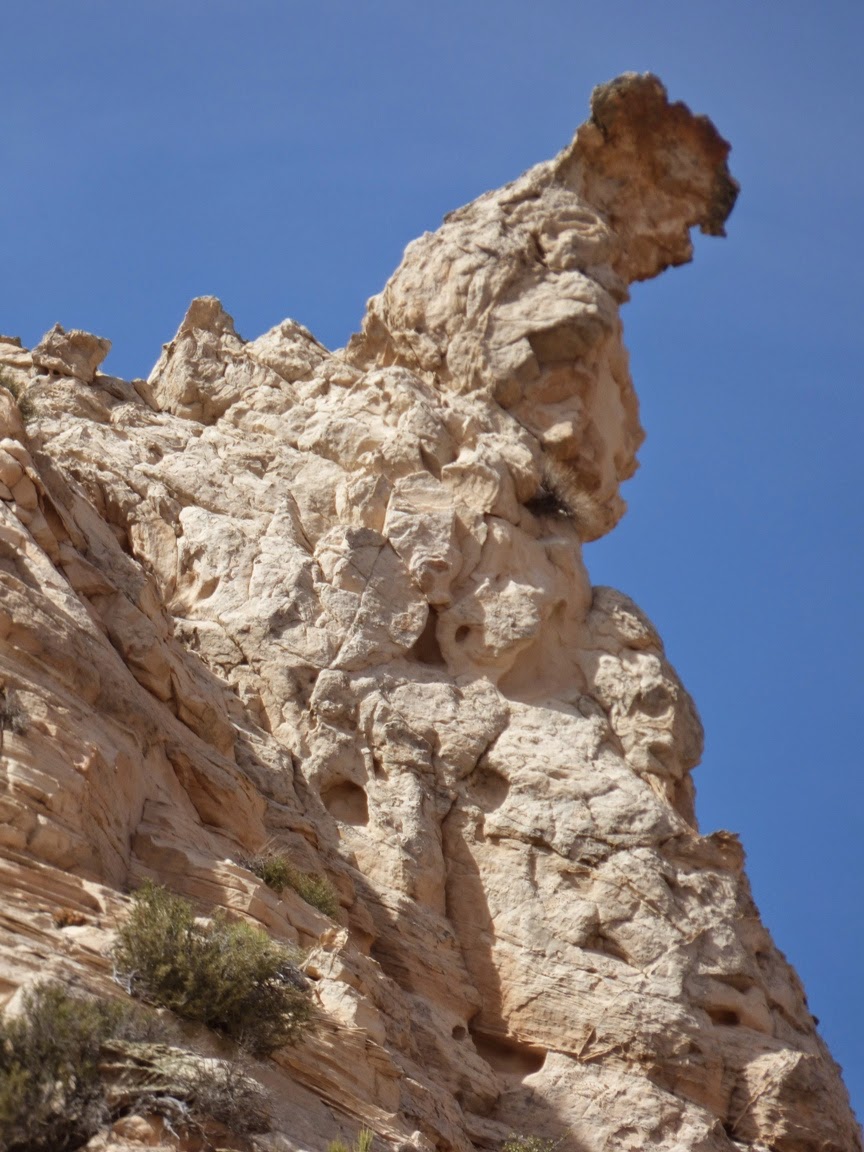 The final rock in our little mini-tour of the Grand Staircase is Grosvenor Arch, which is really two arches, and which once was called Butler Arch until people on an expedition with the National Geographical Society decided to name it after their boss. They apparently had more pull with the Board of Geographic Names. It's not part of the monocline, but is instead at the boundary between two layers of different erosional resistance. The upper rock is a conglomerate equivalent to the early Cretaceous Cedar Mountain Formation, while the lower layer is the Henrieville Sandstone of Jurassic age. The largest opening is 152 feet high and 100 feet wide. 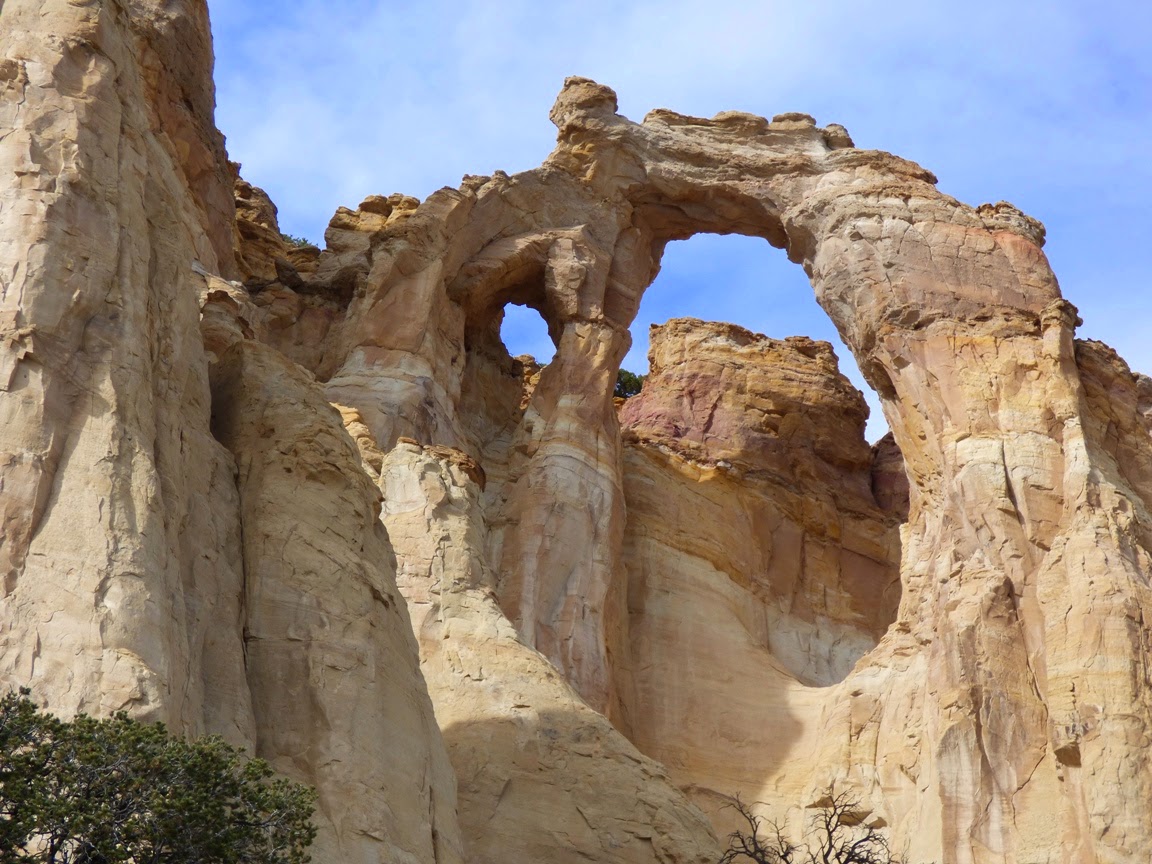 Lastly I have pictures of flowers. Despite the ongoing drought, there were some beautiful wildflowers blooming in one of the side canyons we explored. There were Evening Primroses... 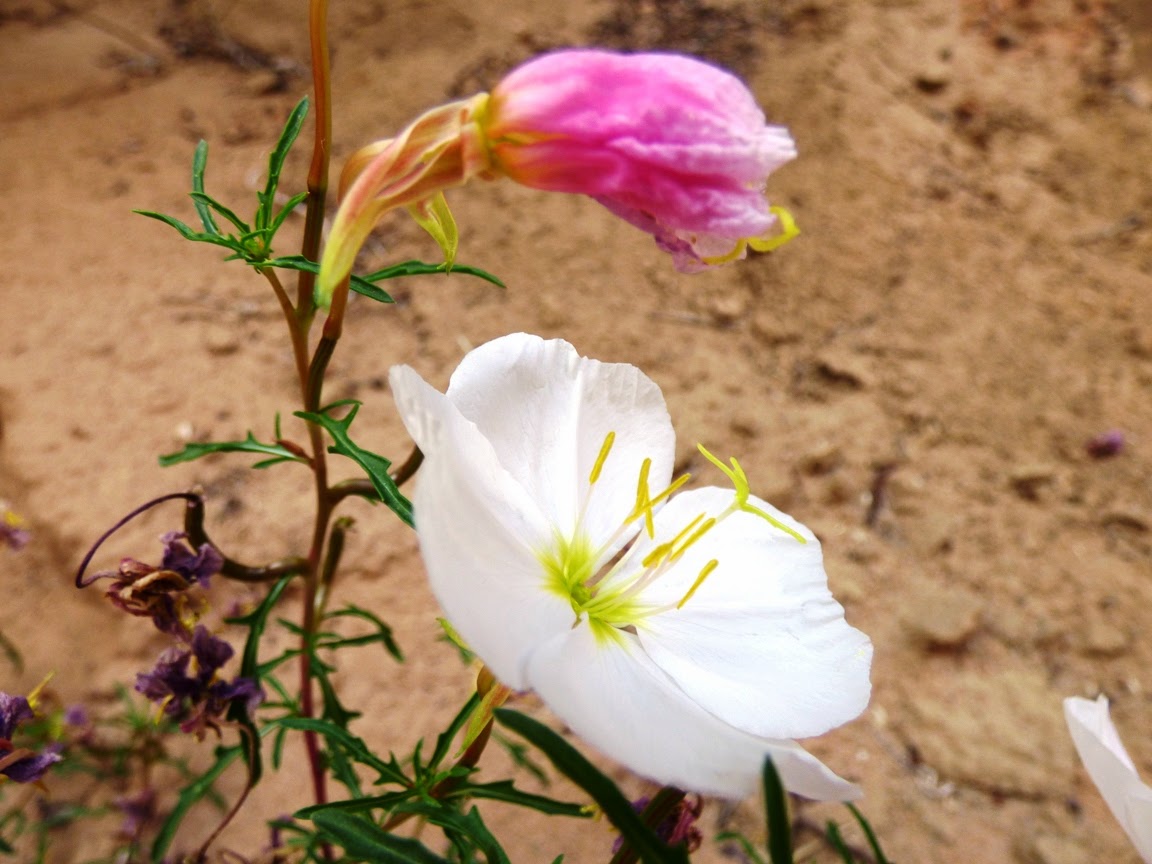 ...and some beautiful Sego Lilies, the state flower of Utah. 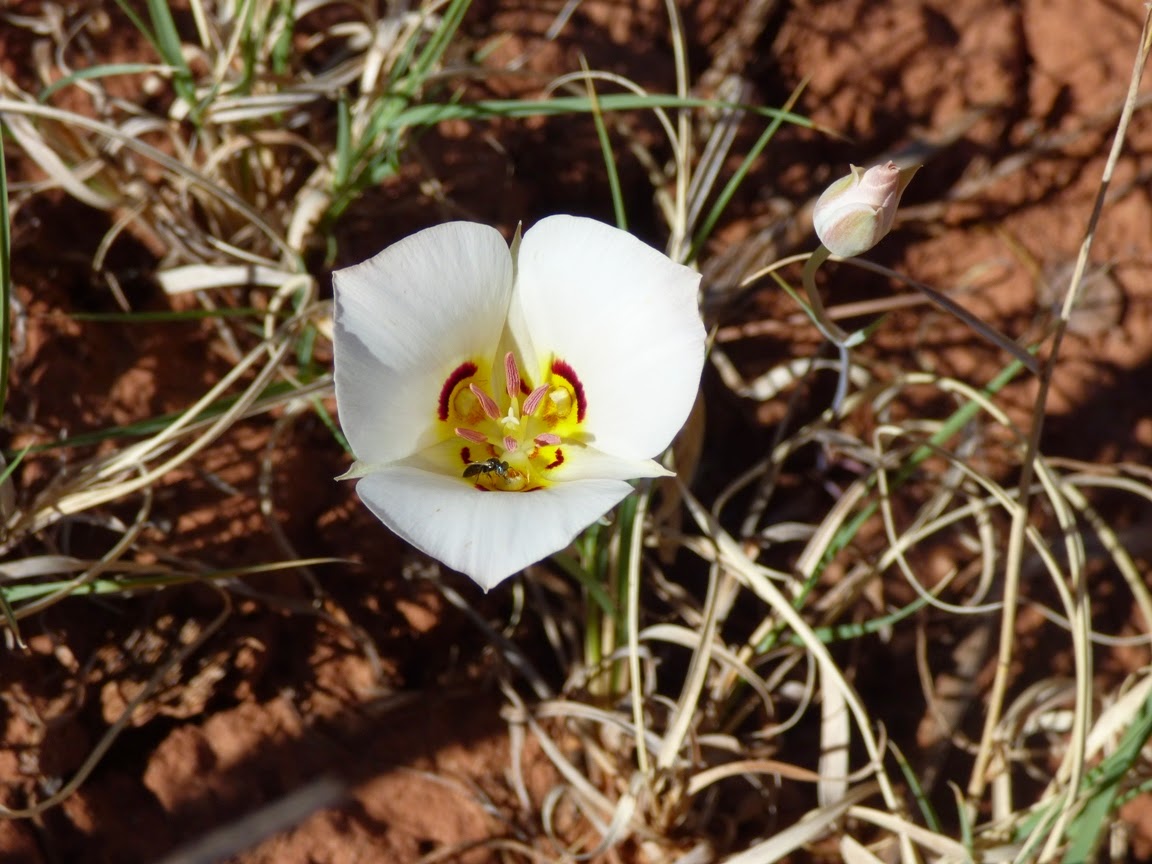