Exploring the Depths of the Grand Canyon...By Car?

The Grand Canyon is one of the great spectacles of the Earth. Millions of people every year stand on the edge of the abyss and peer in, taking in the vivid colors and hidden depths. Tens of thousands venture down some of the few trails that reach into the incredible gorge, and several thousand raft the river. But how many drive the canyon? Did you even know you could? 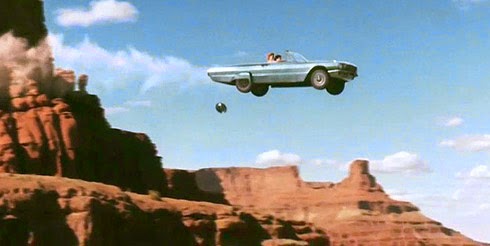 And no, I'm not talking about visiting the canyon "Thelma and Louise" style...

For more than two hundred river miles, no road crosses the Grand Canyon (plus another hundred miles to Lake Mead). Navajo Bridge near Lee's Ferry is at one end, and Pat Tilman Bridge near Lake Mead is at the other. In between in the depths of Grand Canyon there is a single road that reaches the river. It's called Diamond Creek Road, and it starts on Hualapai Nation lands at Peach Springs. It's a marvelous adventure.

Without even considering the philosophical objections to building roads through the wilderness world of the Grand Canyon (objections I completely agree with), there are staggering engineering barriers. There are a series of formations, including the Redwall Limestone and the Coconino Sandstone that form sheer cliffs. The locations of trails in the Grand Canyon are controlled almost entirely by the few locations where they can surmount the cliffs of these two layers.

At Diamond Creek, the Hurricane Fault has offset the formations in just such a way that the cliffs can be avoided entirely. For the entire twenty mile length of the road, there is nary a cliff to worry about, as the road follows the bottoms of desert arroyos and washes. The biggest worry is flash floods and mudflows, which can easily shut down the road in July and August during the monsoons (and badly inconvenience river rafters who plan to take out at Diamond Creek). 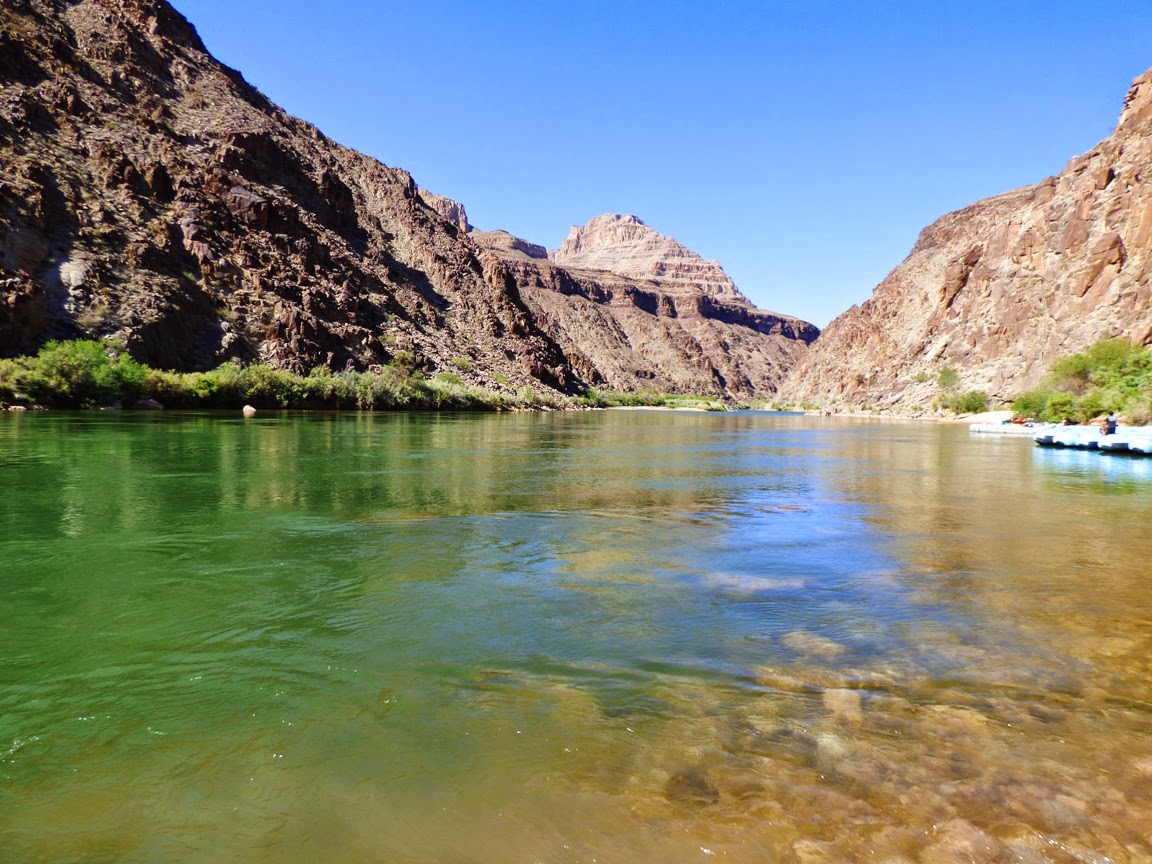 One can certainly discuss the idea that it's "cheating" to drive to the bottom of the canyon, and there is a certain validity that scenery that hasn't been "earned" by completing a stiff hike might end up being less appreciated. But many people can't handle the very strenuous hiking and many simply don't have the time. Driving down into the canyon is a unique opportunity to study the oldest rocks of the canyon, the ones that are the very hardest to access in any other situation. 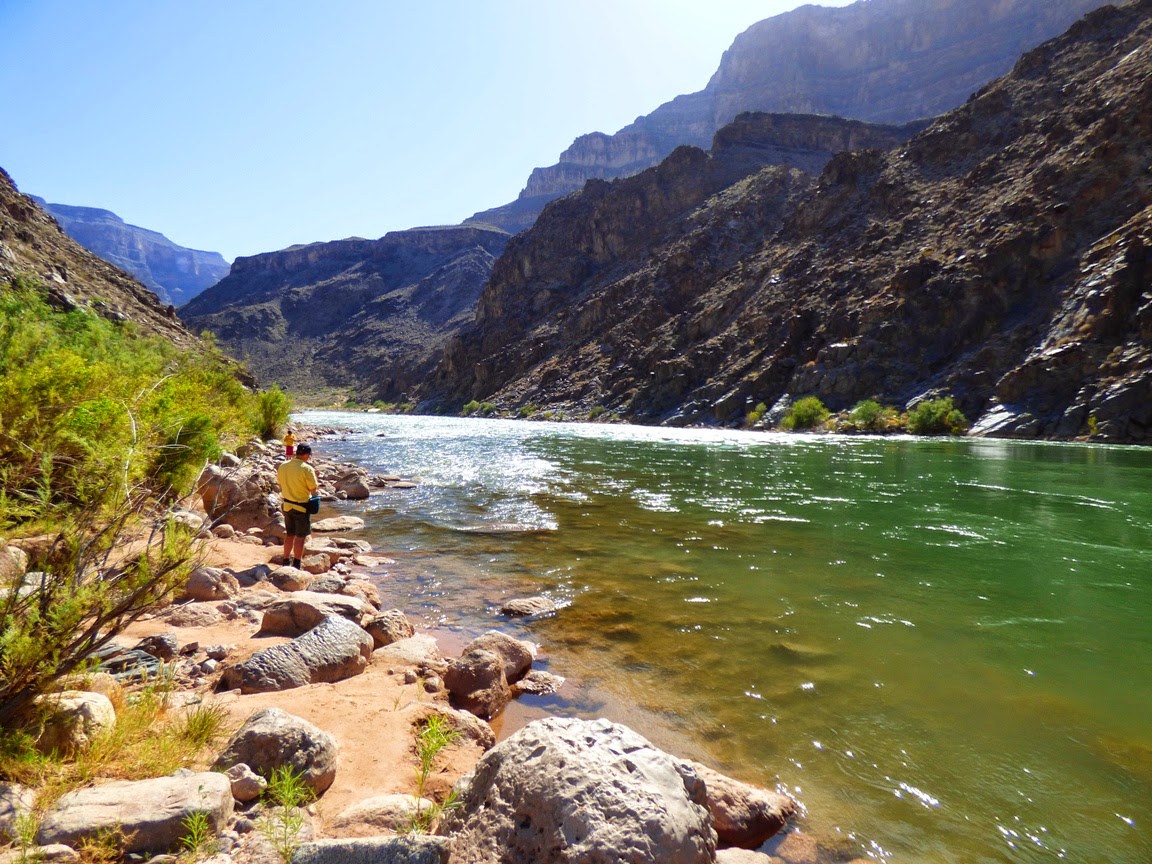 Diamond Creek cuts through to the Granite Gorge Metamorphic Suite, which is the oldest group of rocks found in the American Southwest, dating to as early as 1.8 billion years ago. At roadside there are marvelous exposures of schist, gneiss, and pegmatite granite with bright shiny crystals of muscovite mica and quartz. 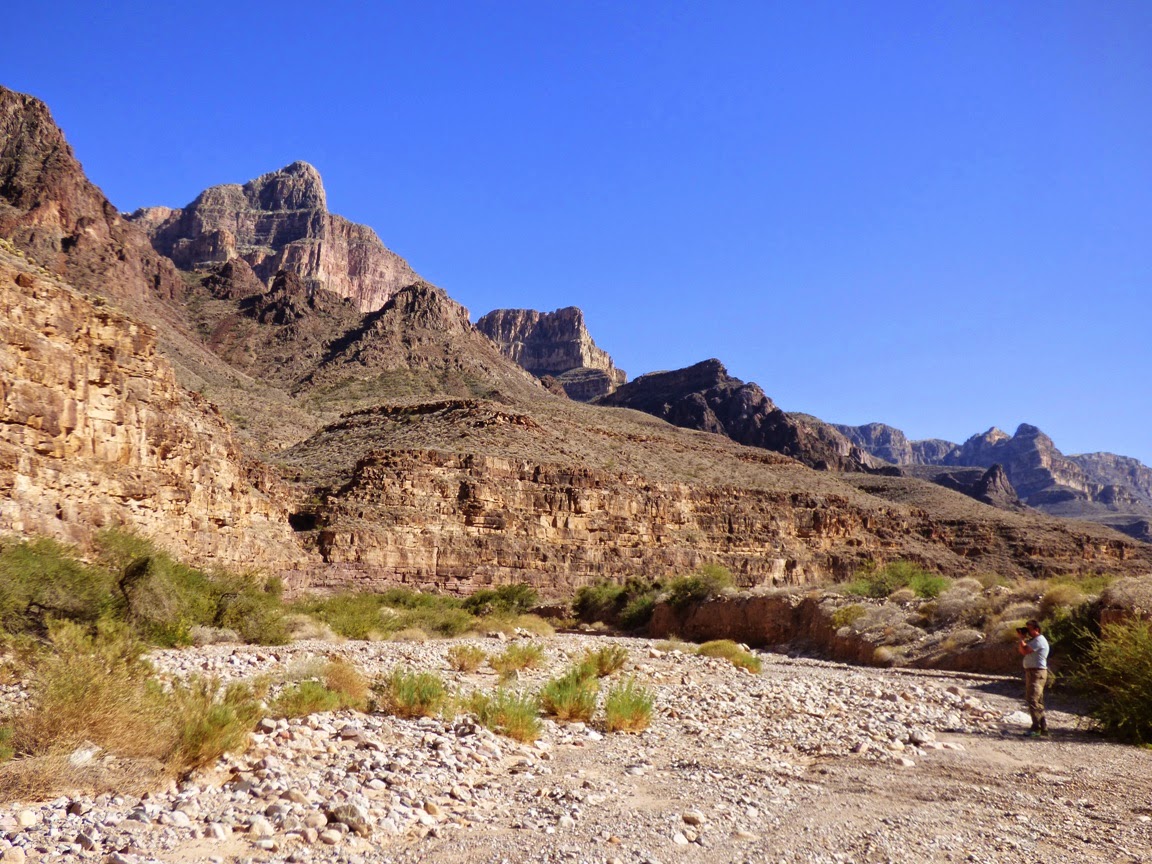 A bit farther up the canyon one can see the layers of the Tonto Group, a series of three formations called the Tapeats Sandstone, the Bright Angel Shale, and the Muav Limestone. The three layers formed as the Pacific Ocean transgressed and covered much of the western North American continent in Cambrian time, just over 500 million years ago. The Tapeats Sandstone sits atop the rocks of the Granite Gorge Metamorphic Suite.

That last sentence needs a bit more explanation. The boundary between the Tapeats and the Granite Gorge rocks is a profound unconformity representing a gap of more than a billion years. This unconformity is actually called the "Great Unconformity", and is an erosional surface that was witness to not one, but two major mountain-building events. The metamorphic rocks were once the core of a vast mountain range that formed 1.7 billion years ago when the North American continent collided with a set of two exotic terranes, the Yavapai block and the Mazatzal block. Imagine an island the size of California or New Zealand grinding into the edge of a continent along a subduction zone and you will get the picture. This massive mountain range eroded to a flat low-relief surface over the next few hundred million years. 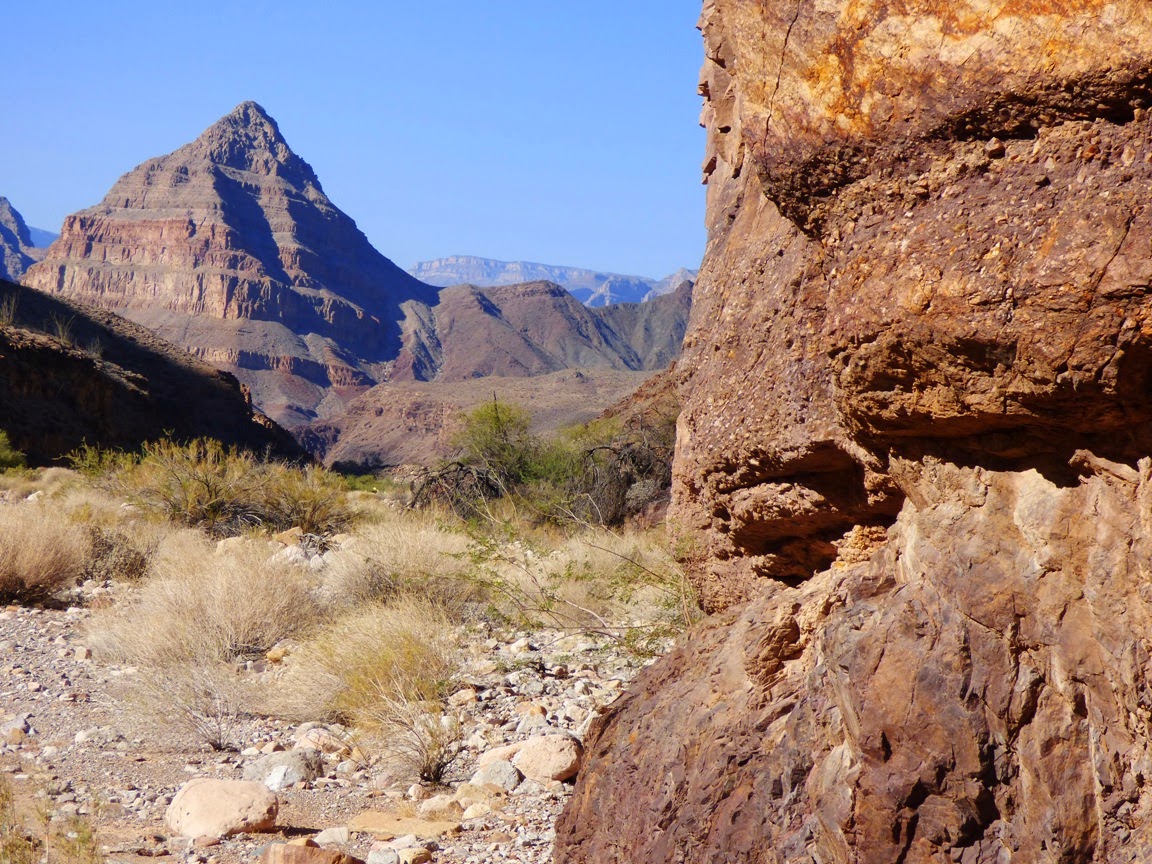 Later on, about a billion years ago, the continent stretched and broke apart, forming a series of fault-block mountain ranges that reached heights similar to the mountains in and around Death Valley National Park today. The rocks of these mountains are exposed in the easternmost part of the Grand Canyon, but they too were eventually eroded down to a low-relief surface as well, although small  ridges a few hundred feet high persisted. Along the lower reaches of Diamond Creek Road, you can lay your hand on a boundary between two rock sequences with a gap of more than a billion years between them. The unconformity can be seen in the photo above where a conglomerate rests on contorted metamorphic rocks in the bit of shadowed ledge. The "Diamond" of Diamond Creek is the uniquely shaped peak on the left side of the photograph. It is actually a sliver of rock caught between two branches of the Hurricane fault system. 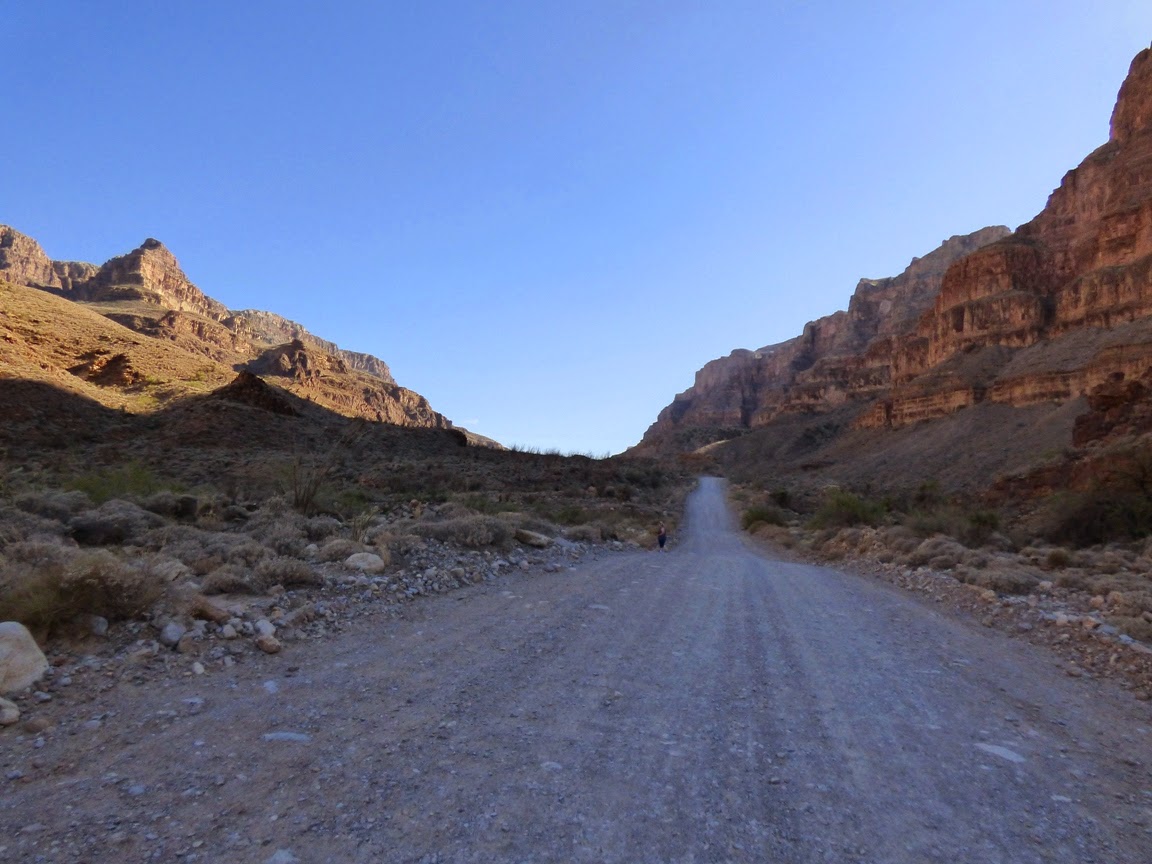 Another layer that is prominently exposed along Diamond Creek Road is Devonian-aged Temple Butte Limestone. Most park visitors never see it because in the eastern section of Grand Canyon National Park the Temple Butte is a discontinuous thin layer that is pretty well invisible from the rim. In western Grand Canyon it is more than 700 feet thick. It formed as a tidal estuary and tidal flats along the edge of the continent about 385 million years ago. 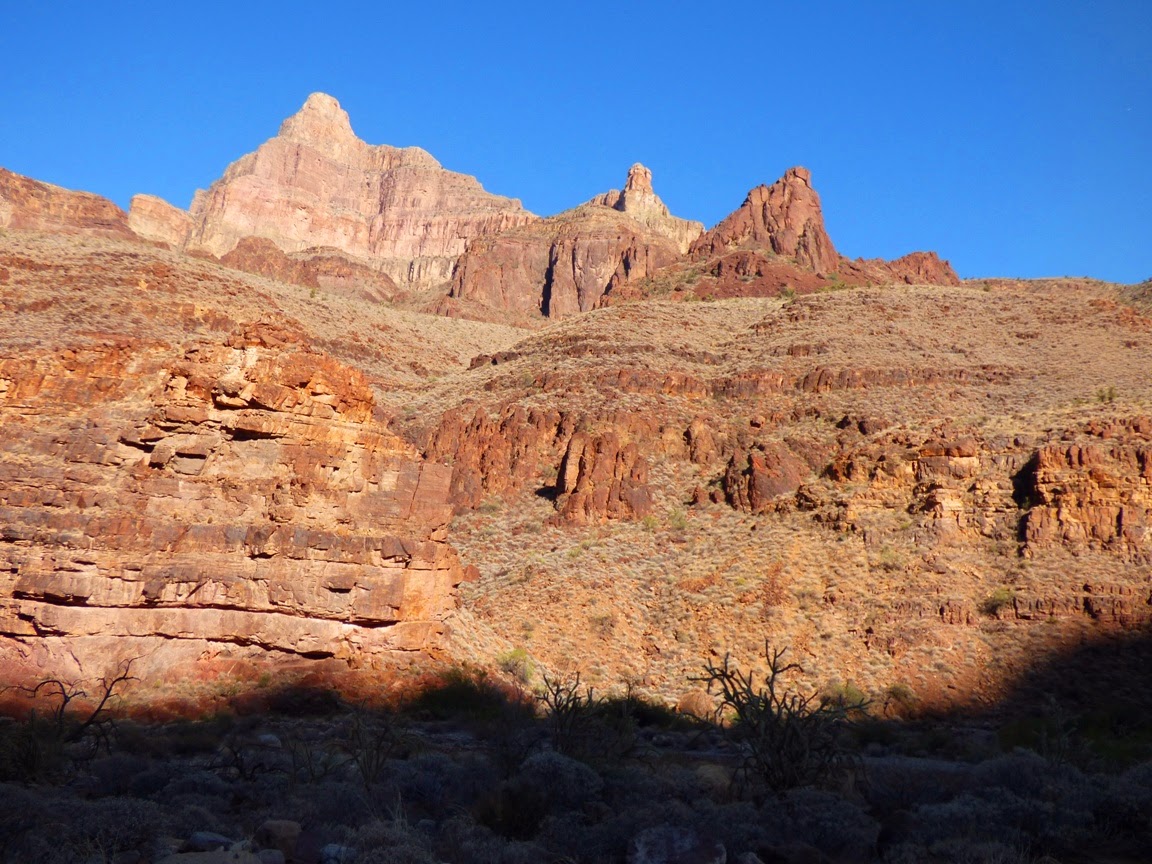 The most "mysterious" aspect of Diamond Creek and Peach Springs Canyon is that the tributary canyons to this creek are older than the Grand Canyon itself. It's an odd problem. Along the upper reaches of Peach Springs Canyon, there are a series of Paleocene to Miocene-aged rocks clinging to the canyon walls. They once filled the canyon, meaning the canyon was carved prior to sixty million years ago, and the rivers that carved it flowed northeast, opposite of the Colorado River today. Apparently the land subsided so that the canyons were filled with sediment, and then they were exhumed when the modern Grand Canyon was carved, most likely within the last four or five million years.

Diamond Creek is a fascinating excursion. It is entirely on Hualapai lands, and they charge a fee of around $25 per person for permission to drive the road. I never mind paying the fee, because the tribe doesn't have many sources of income or all that many jobs on the reservation. The town of Peach Springs where the road starts has a very nice motel and restaurant (and not much else), and if you are a train lover, you'll be able to listen to them all night long. The rails are amongst the busiest you'll ever see.The town is on one of the last remaining stretches of the original Route 66.
Posted by Garry Hayes at 2:13 PM