It's a Dam Big Reservoir, But There Are Some Dam Scary Things About It. First off, I am so sorry for the dam puns. I'm a geologist, and we geologists are just no dam good at resisting stupid puns. It's something you'll just have to take for granite.

In any case, this is a dam big reservoir. It's Hoover Dam, the first of the gigantic mega-dams constructed in the U.S. back in the 1930s during the height of the Great Depression. Thousands of hungry unemployed men came from all over the country to work in the construction, and in the dangerous conditions, more than one hundred of them died. It's 726 feet high, which at the time was the highest dam in the world (it's the 18th highest now). It holds back about 30 million acre-feet of Colorado River water, equivalent to more than two years of normal stream-flow. At least, what was normal thirty years ago. 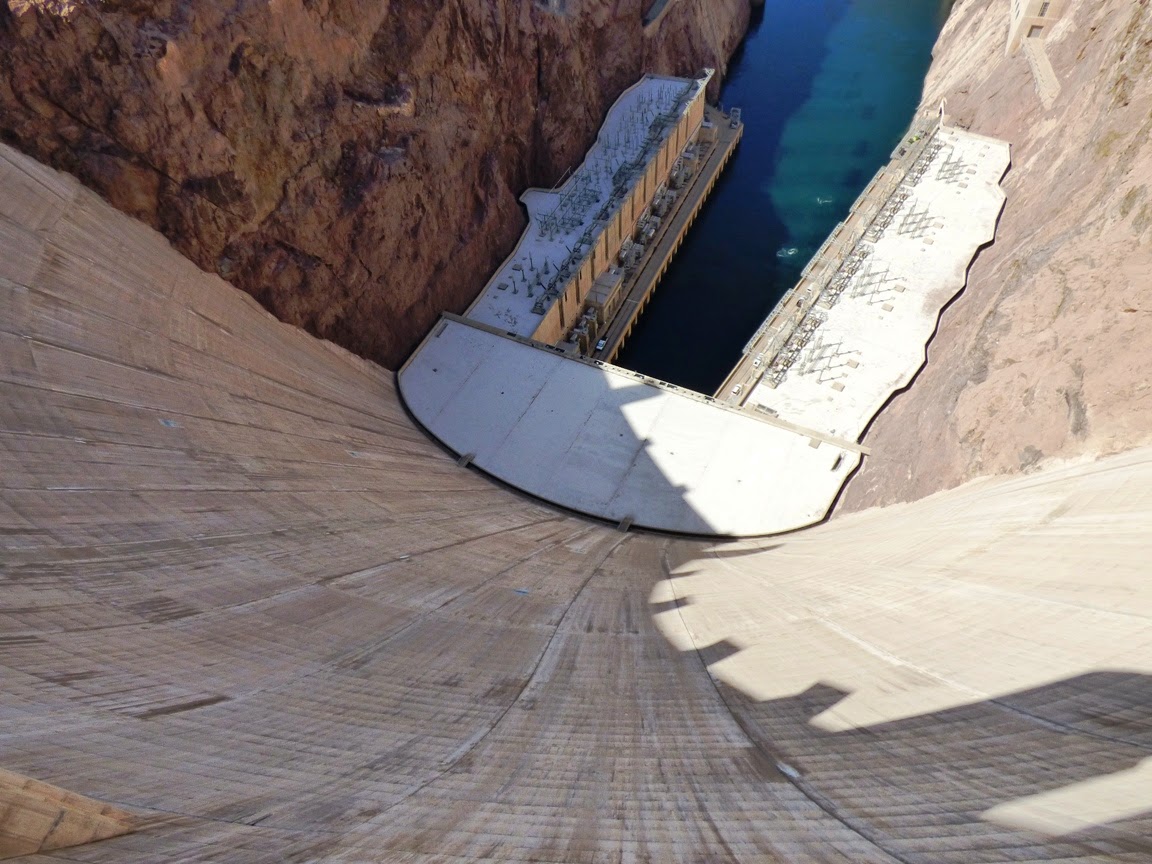 It's an astonishing achievement even if I seem to belittle it with semi-sarcastic puns. Walking across the dam is an experience in perspective. It is really big. Ultimately, some thirty million people in three states and Mexico depend on the water that it stores. 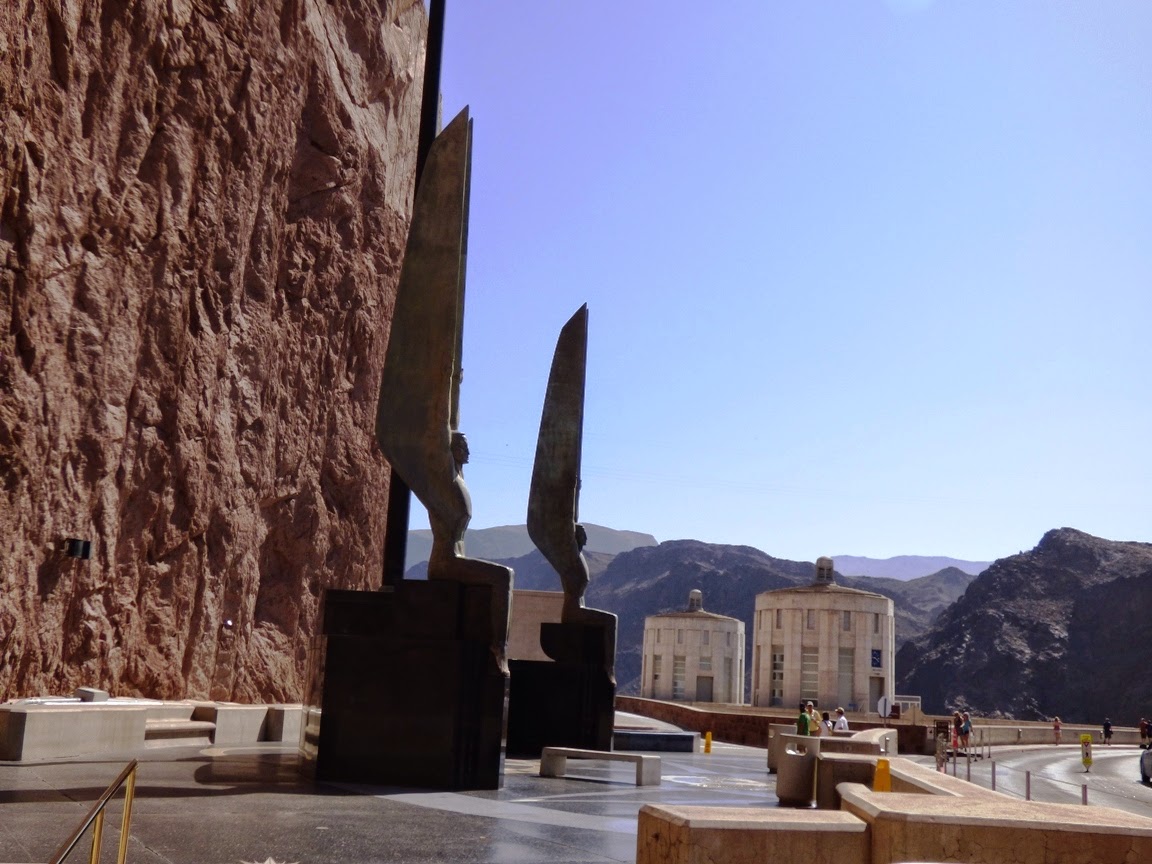 Not that it's pretentious or anything, but there are trimmings that make me think of the old USSR. Gigantic statures of winged gods greet the visitor on the Nevada side of the dam, and a loudspeaker emits a constant stream of platitudes about the glory of the achievement of making a river slow down for an instant of geologic time. 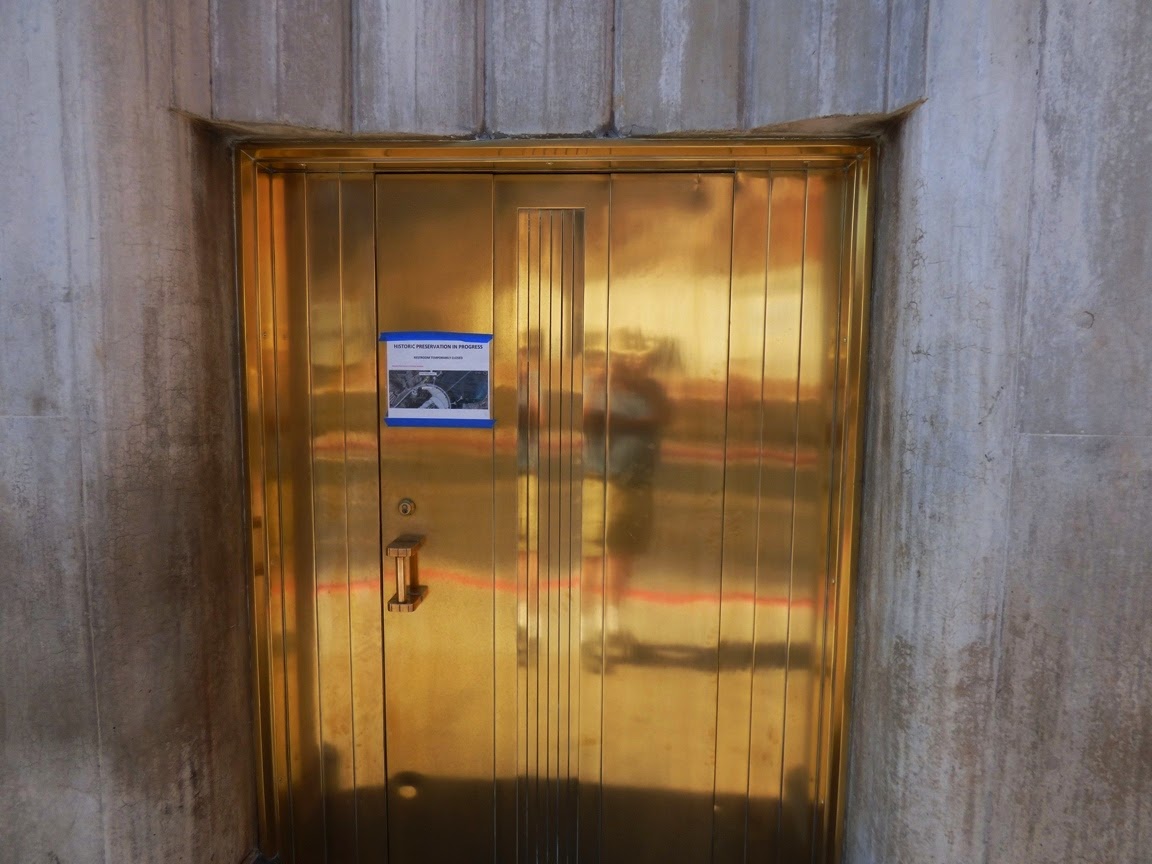 Can you guess the purpose of this golden door? Is it the entrance to the Watermaster's Throne Room, the portal into the Cathedral of Power Generation? No, it's actually the door to the men's bathroom on the top of the dam. Unfortunately it is undergoing renovation, so I can't show you the pretentiousness that awaits within (plus, I would have been arrested as some sort of creepy person).

Still, there are some dam frightening things about visiting Lake Mead and Hoover Dam. First and foremost, the dam is missing something. Water. It's missing a lot of water. It's sitting at the lowest level ever seen since the dam's floodgates closed in the 1930s. It hasn't been full as far as I know since the flooding in 1983, and prospects are not good for changing this situation in the face of ongoing drought and climate change. 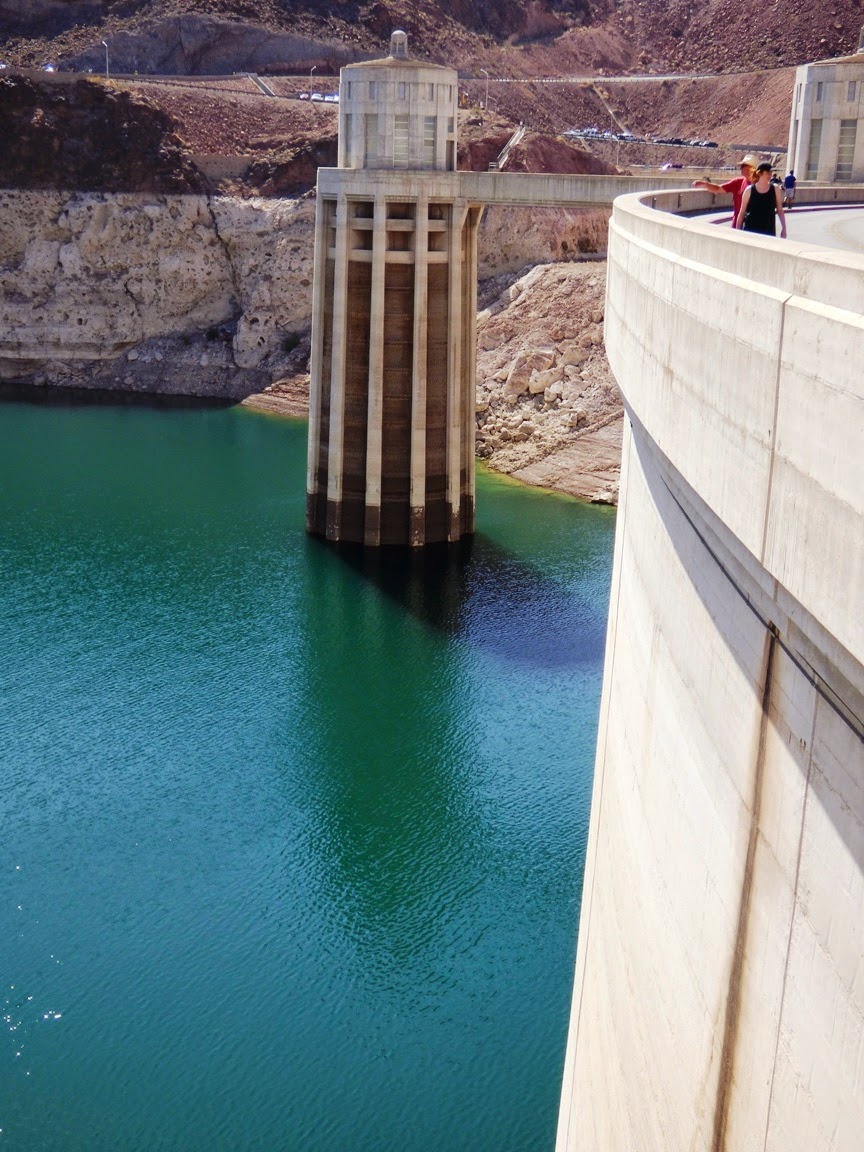 Then you see stuff. Walking down the stairway from the new parking structure, there are all these square pieces of metal stuck to the cliff. What the hell? Those are rock bolts, essentially long screws encased in concrete and bolted to the rock wall for the purpose of maintaining the rock wall as an actual wall, instead of a rock fall. If the dam is built in stable rock, what do they need rock bolts for? 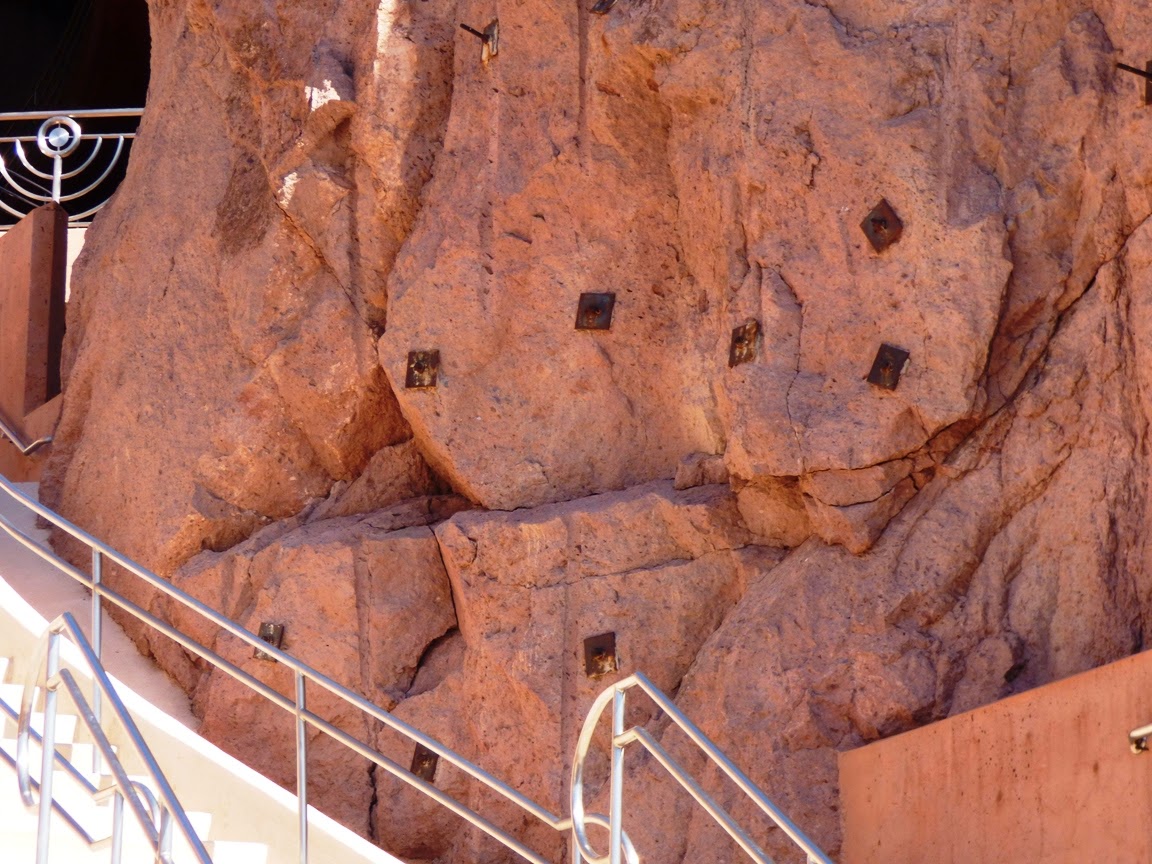 Then you start to notice other things. In the roadcuts across the highway from the dam there are strange looking scratch marks on the rock surface. They're called slickensides, and they develop as one block of rock grinds against another. Along a fault. Yeah, those things that cause/result from earthquakes.

Before I started researching the field seminar that I'm currently conducting, I assumed that Hoover Dam was anchored in ancient stable metamorphic and plutonic rocks. That is the kind of rock that is exposed in Black Canyon downstream from the dam. A close look at the rocks reveals a different composition: they are rhyolitic volcanic rocks, and according to the guides and the maps, they are Neogene in age, from around maybe 15 million years ago. 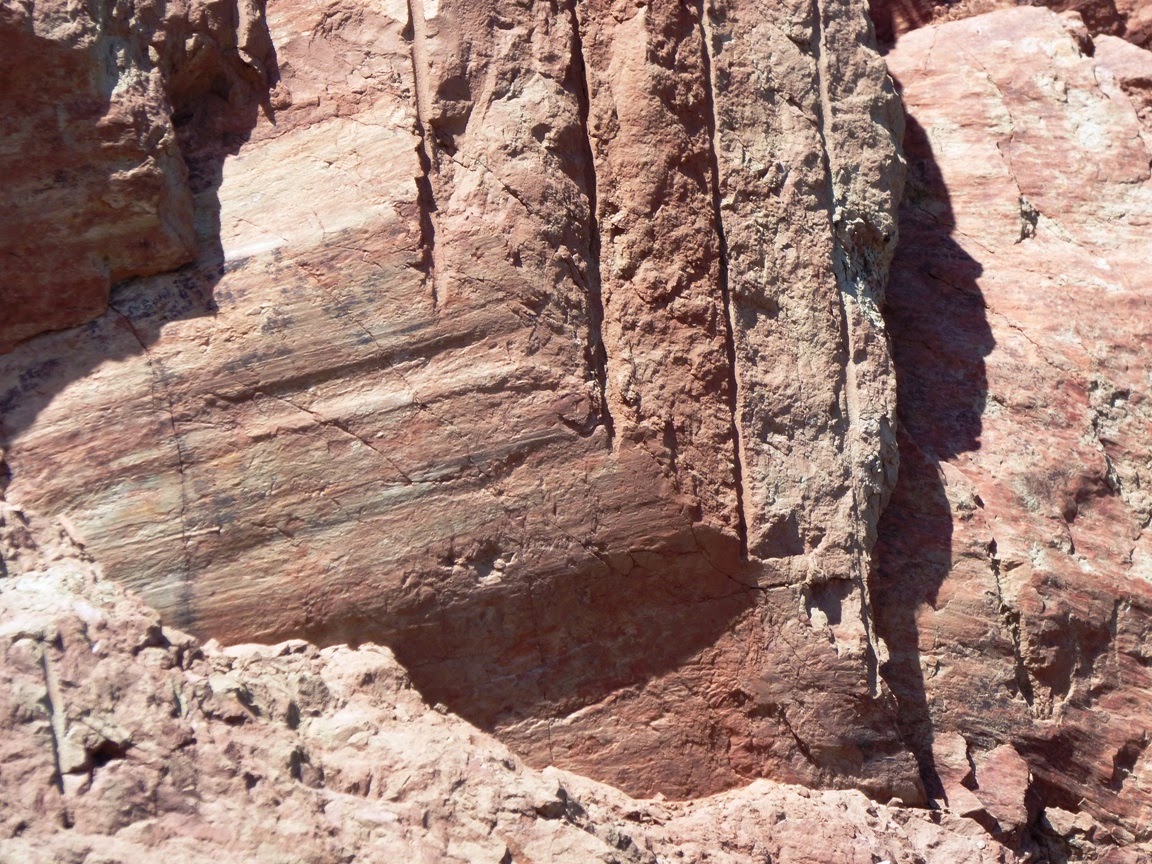 The volcanic rocks erupted in a complicated geologic environment of extension and transcurrent faulting that opened up spaces between crustal blocks that allowed magma to rise to the surface. They have been complexly faulted, and it turns out that a walking tour of the dam site is a nice lesson in a comparison of normal and strike-slip faulting. The dam engineers and the dam architects back in the 1930s declared the dam abutments to be safe and stable, and who am I to argue with them? I am not a dam engineer or a dam architect. It doesn't look like any leaks are occurring in the canyon walls downstream, unlike a certain other dam reservoir that I was looking at today. 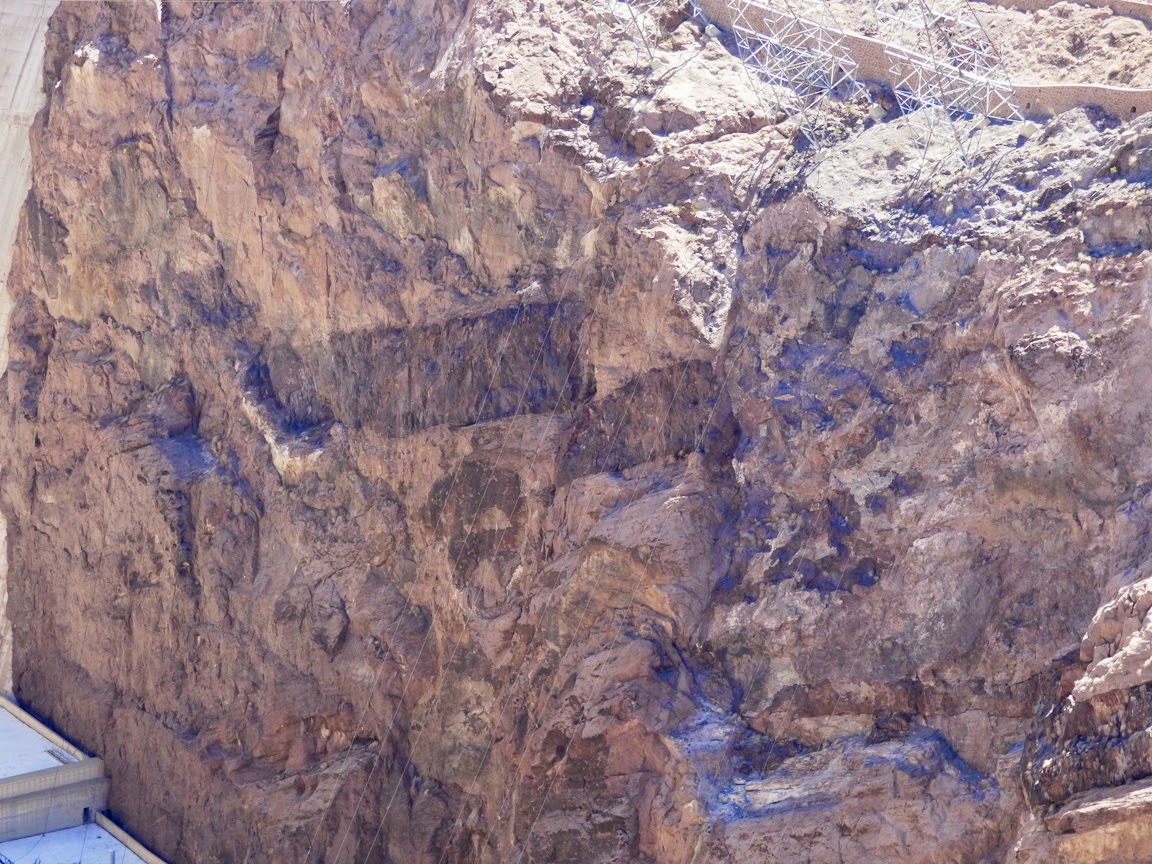 The other dam thing I saw today wasn't really scary, except in my imagination. You have to realize I was looking down 200 feet at this big fish, a carp or something. It may have been three or four feet long, and for a moment it looked a dam shark! Maybe that Sharknado thing really happened, and a few landed in Lake Mead... 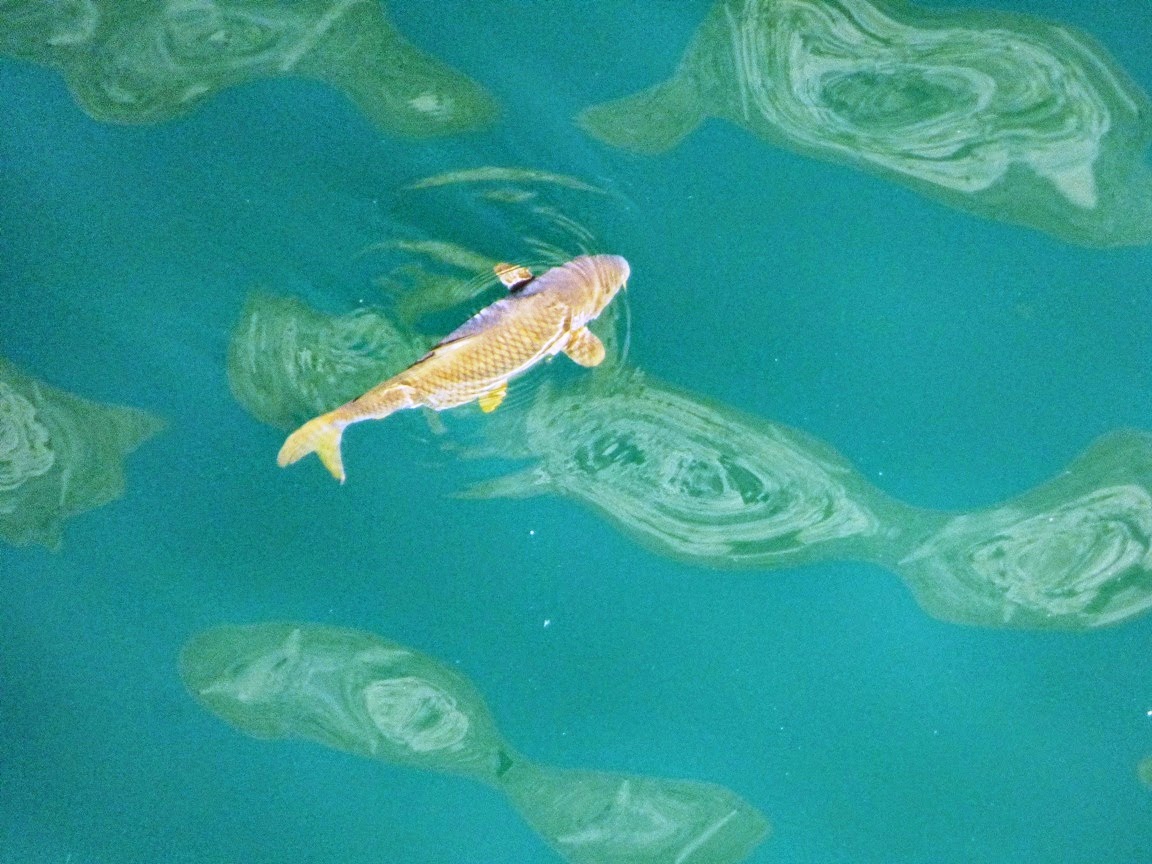 The dam morning was almost over, so we hit the road. We were headed towards the Grand Canyon, a much better place to appreciate the Colorado River.
Posted by Garry Hayes at 10:00 PM

I'm curious about the high water mark on your photo of the penstocks. If the water level varies from year to year why wouldn't there be a more gradual transition from the red to the "bleached" rock?

Good question that I don't know the answer to. I'd guess that the effects of inundation in water is quick at changing the chemical conditions and therefor the color of the rock, and that the change is permanent in human terms.

It’s not just drought that is keeping water levels low. I’ll bet the population needing that water has doubled, at least, in that time frame.