Revealing the Riddle of the Red Rocks 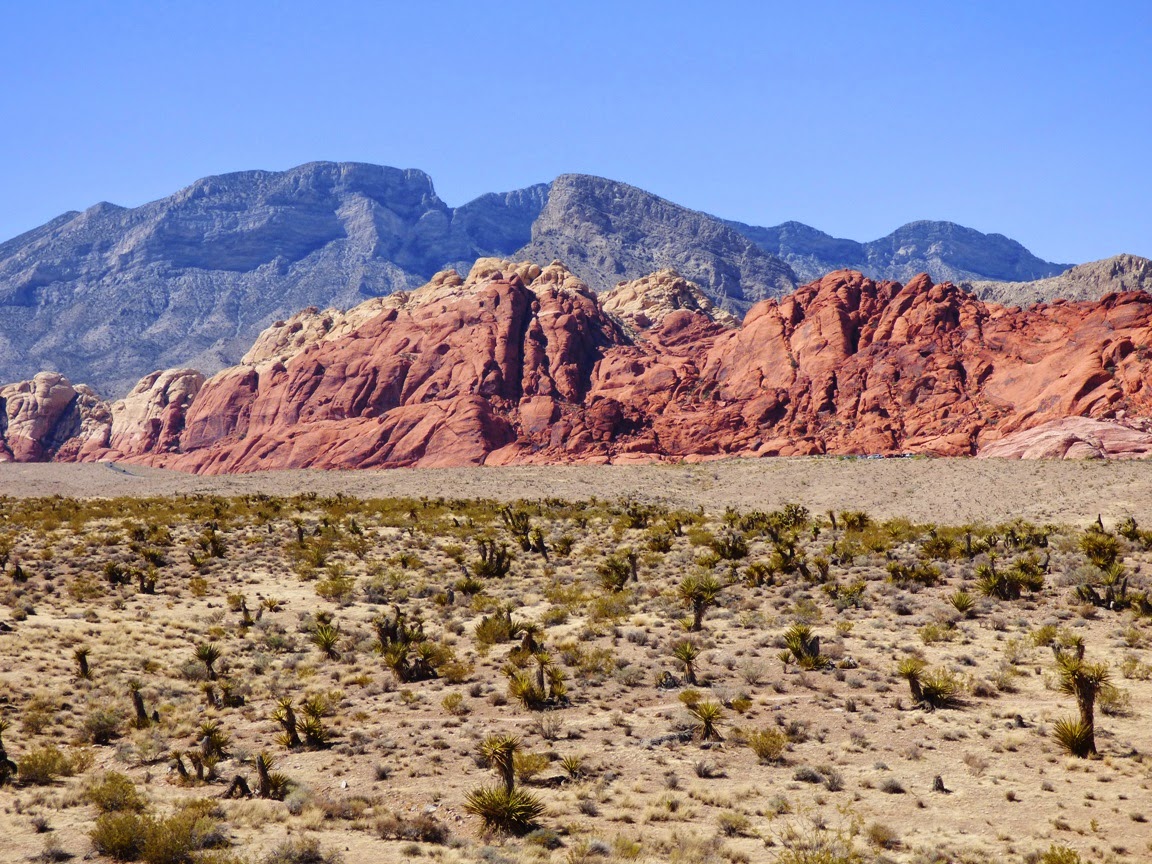 It's pretty amazing the places that didn't get made into national parks. It's pretty amazing that tens of millions of people visit Las Vegas and never make it just a few miles west of the city limits to see an incredible place where the rocks are red, and the rocks are a bit of a riddle. The problem? The rocks on the top, the gray limestone seen on the distant ridges is 300 million years older than the red rocks underneath. They are out of proper order. 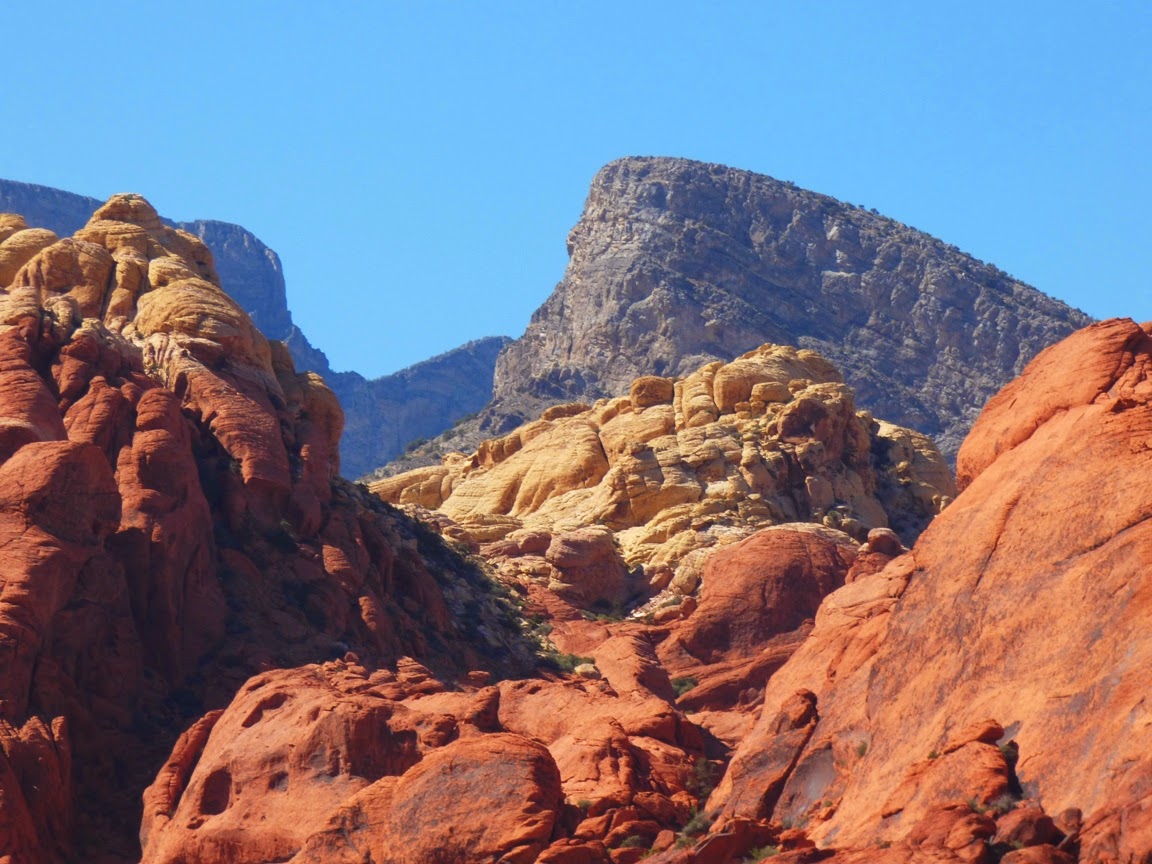 The red rocks are the Aztec Sandstone, a Jurassic aged sand dune deposit that is correlated with the Navajo Sandstone, found in national parks like Zion, Arches and Capitol Reef. They developed in an immense sand dune "sea" that once extended from Wyoming to Arizona to eastern California. 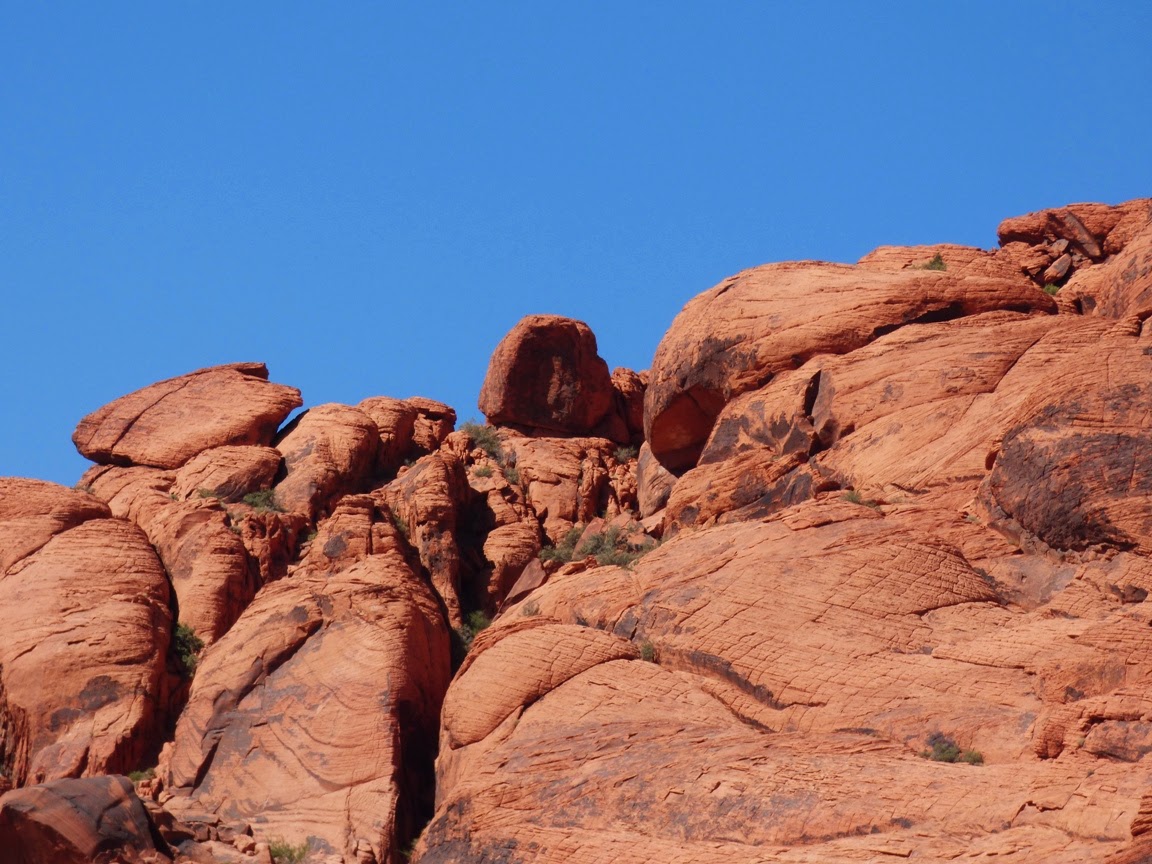 The red color comes from iron oxide (the mineral hematite, or natural rust) coating the sand grains. I haven't found a lot of agreement over whether the red staining is a secondary effect, or a primary feature of the sandstone. 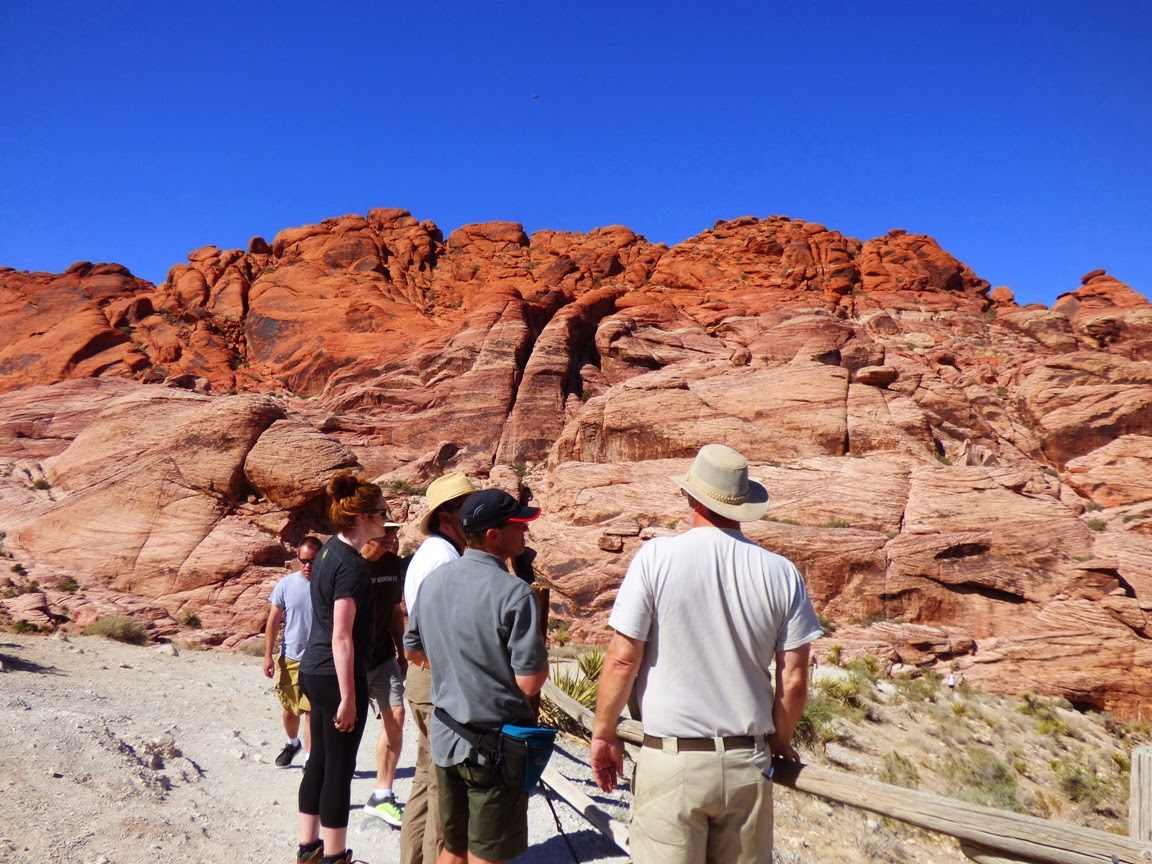 In either case, the outcrops are colorful, in shades of white, pink, red and brown. The rock exposures also display beautiful crossbedding, the sloping layers representing the slip faces of the ancient dunes, frozen in time by calcite or other mineral cement. In many places the rocks are broken up as if they have been through a gigantic nutcracker.

Which, by the way, they have. 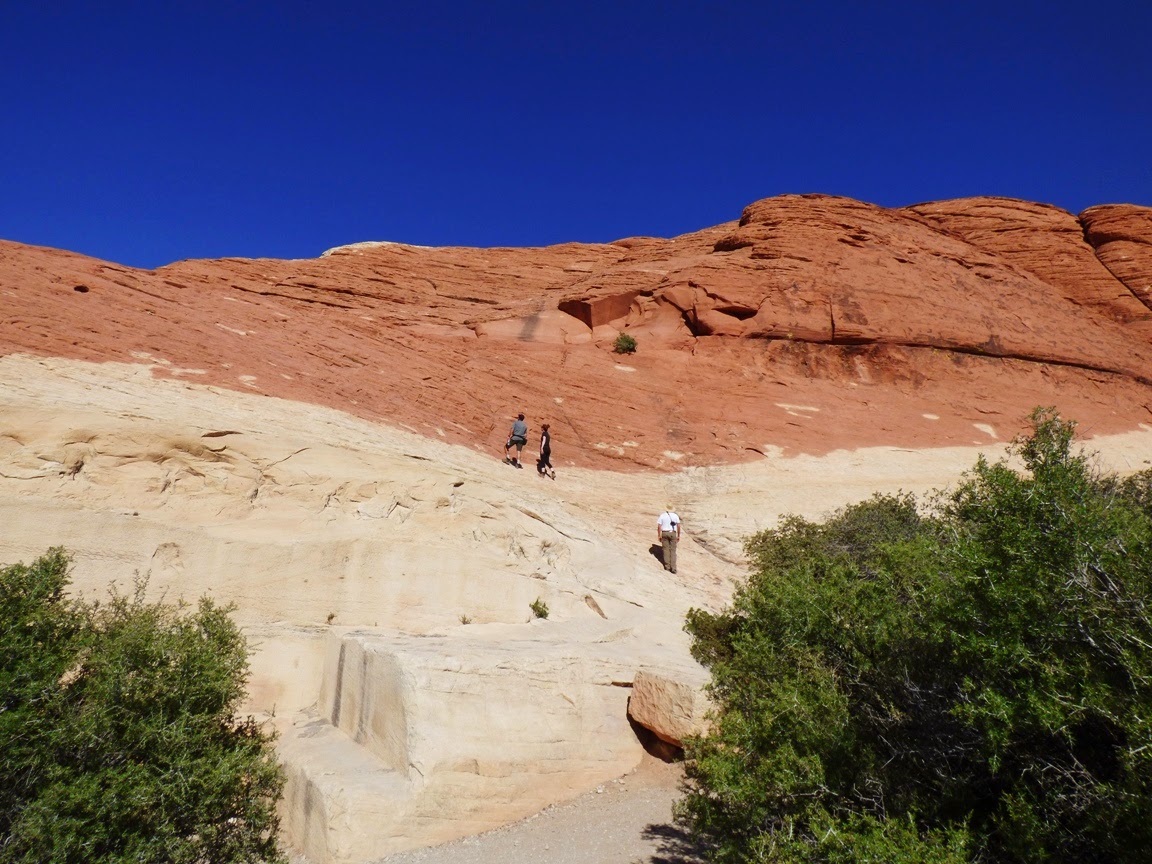 Faults run through the region, an earlier set representing intense compression related subduction off the western coast of North America, and a later set formed during the extension that led to the development of the Basin and Range Province. The compressional thrust faults had the effect of pushing the older limestone rocks up and over the younger Jurassic sandstone during the Sevier Orogeny towards the end of the Mesozoic Era (that's the one with the dinosaurs). There are several such faults in the area, but the best known is the Keystone Thrust. 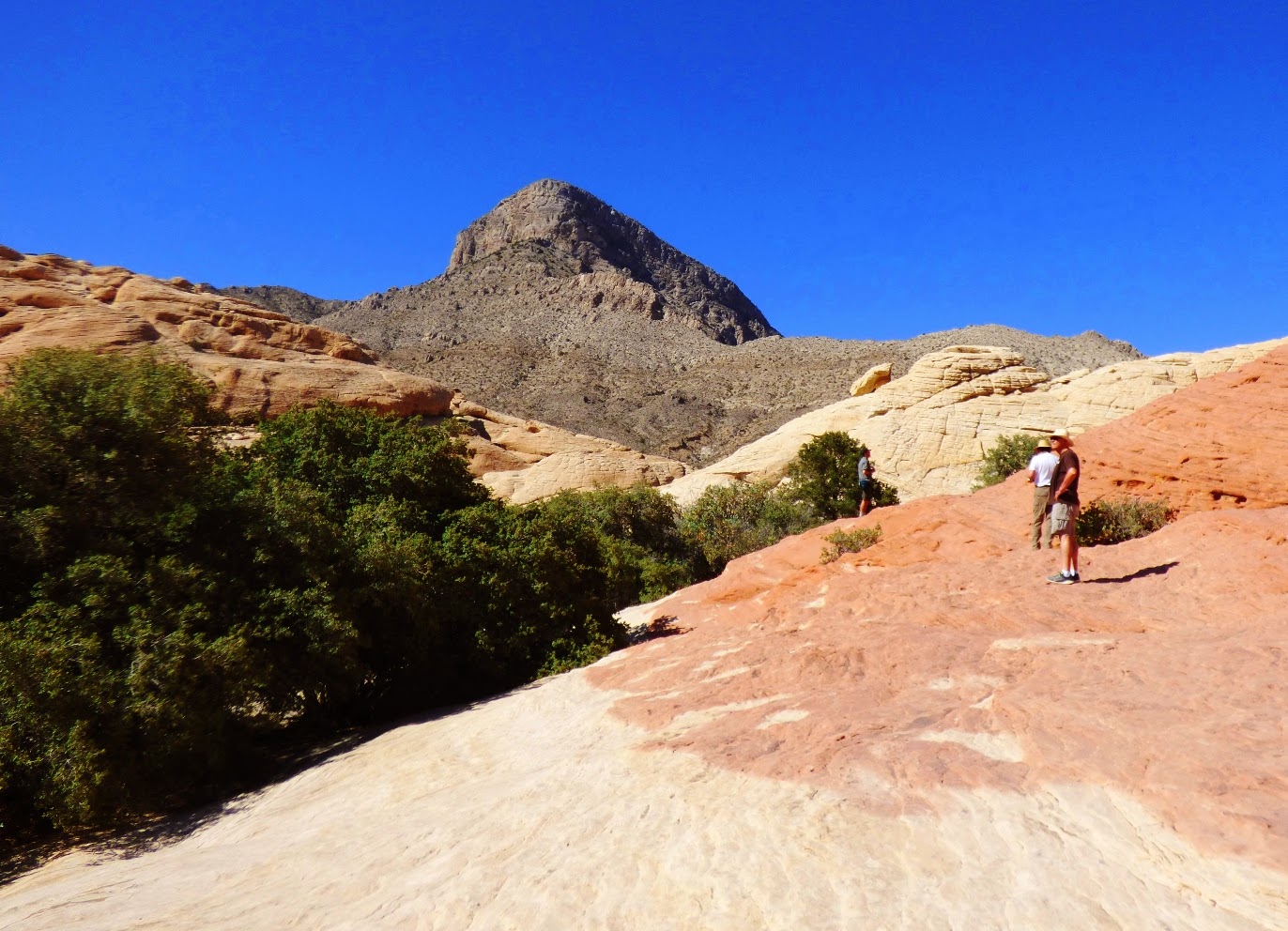 The later normal faulting dropped the valley floors and lifted the mountains, exposing the older faults to view. Erosion has resulted in the spectacular outcrops that make up the conservation area we see today.

Red Rock Canyon National Conservation Area is a wonderful place to visit, whether you've blown all your money at the casinos and can't afford to do anything else (hold back $10 for park admission!), or if you came to Vegas for the expressed purpose of visiting this wonderland of rocks. It is a much better use of your time if you ask me! 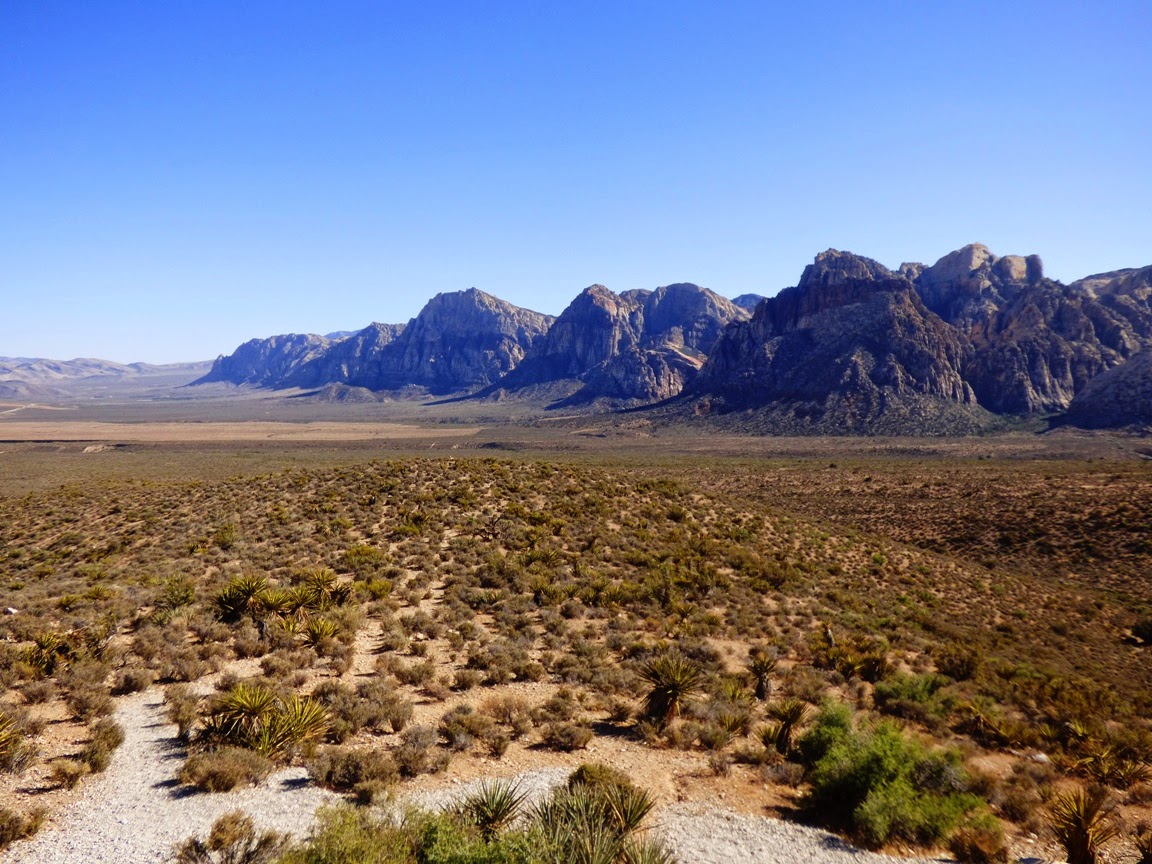 An amazing and wonderful place to visit, Garry. Thanks for the photos and explanations, once again. I've been there before since I don't gamble - i.e., I don't think it's entertainment to throw money down a toilet (so to speak).

Thanks for the post! We visited there last year, but did not know about the riddle.

We did find a petroglyph though.