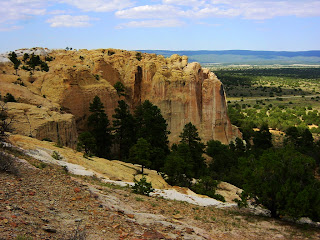 How thirsty have you ever been? It's easy to go to the faucet and get a drink these days. But what was it like to wander through a desert landscape in an unfamiliar region, with empty waterskins and thirsty animals 400 years ago? It's hot and it's been a day or more with nothing to drink. You seriously wonder if you are going to make it any farther. And then, at the base of a white cliff, you find a pool of water. Talk about a time when one would appreciate a drink of water, no matter how dirty, no matter how many organisms are swimming about! That is a moment that would imprint itself on your memory for a long time. 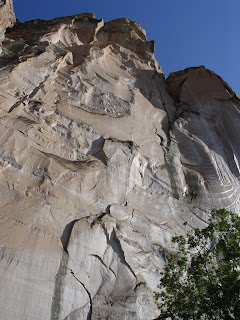 The pool is what made El Morro National Monument a memorable place. For hundreds of years, storm waters have poured off the cliff face into a deep plunge pool. And for hundreds of years, humans have been attracted to this one small oasis in the middle of a barren landscape otherwise devoid of dependable water sources. 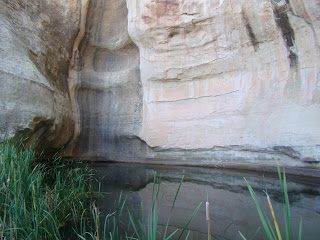 El Morro (Spanish for bluff or headland) is a high cliff of the Zuni Sandstone, a middle or late Jurassic sandstone that was deposited in a sand dune "sea".  It readily forms cliffs and did so here as the  Zuni Uplift was pushed skyward in Cretaceous and early Cenozoic time and subjected to erosion. 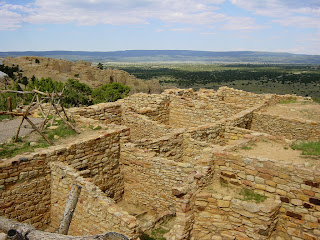 The Ancestral Pueblo people certainly knew of this place. In the late 1200s they constructed a huge village on top of the mesa, with enough rooms (875!) to house 1,000-1,500 people. They abandoned the site after only 75 years or so. As they did in many other places, they left inscriptions in the rock. The sand is only loosely cemented (by clay), so the petroglyphs show in greater relief than in many other places. 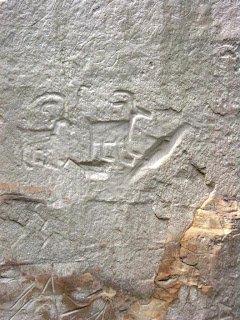 Twitter and Facebook in the title? Sure...what is Twitter and/or Facebook anyway but a way of saying "I was here"? They are ways of sending messages, and expressing...um...dissatisfaction. That's what happened at El Morro, too, but in more of a permanent fashion. The Spaniards established a presence in New Mexico in the late 1500s, and in 1605, the first inscription went onto the rock:

"Passed by here the Governor Don Juan De Oñate, from the discovery of the Sea of the South on the 16th of April, 1605."

The next oldest inscription is what made me think of Facebook...it was made by Governor Don Juan de Eulate in 1620 (below):

"I am the captain general of the provinces of New Mexico for the King, our lord, passed by here, returning from the Zuni pueblos on July 29, 1620; he left them in peace, at their request; asking his favor as vassals of his majesty, they again rendered their obedience, he did all this with attention, zeal, and prudence, as such a particularly Christian (gentleman) and gallant soldier of unending, praiseworthy memory."

Why Facebook? First, he's bragging. And then someone added a comment putting him in his place. Note how the word "gentleman" is scraped out. No one knows who did it (an anonymous hacker?). I like to imagine a servant or foot soldier rolling his eyes at the vanity of the governor. During the night before they left, the guy snuck up to the cliff and scratched out the offending word... 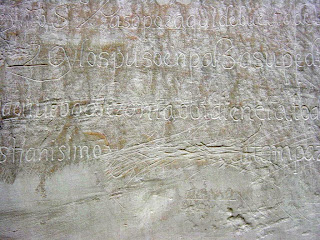 Another inscription hints at the tragedy of the times; in 1692, General Don Diego de Vargas wrote:

"Here was the General Don Diego de Vargas, who conquered to our Holy Faith and to the Royal Crown all of the New Mexico at his own expense, year of 1692."

A bit of bragging again ("at his own expense"?), but this was a terrible time for the people of the Pueblos. Twelve years earlier, in 1680, they had had enough of the Spanish overlords, and they violently expelled them from New Mexico. After a dozen years the Spaniards reconquered the pueblos, and there would be centuries of domination ahead. 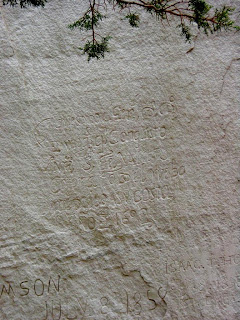 The last Spanish inscription dates from 1774. The Americans arrived in 1849 on the heels of victory in the Mexican-American war, and hundreds of inscriptions followed. By the time the cliff became a national monument in 1906, more than 2,000 "modern" petroglyphs had been recorded. 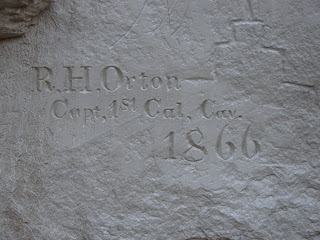 It took some time to get the idea of "preservation" of history. At some point in the early years of the park, some "comments were removed by the system administrator". They were judged not "historical" enough. After many decades one has to wonder which was worse: the original late graffiti, or the scraped and smoothed surfaces (below)? 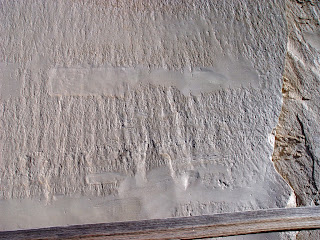 El Morro National Monument is on Highway 53 between the Zuni Pueblo and Grants, New Mexico. The hike to see the pool and Inscription Rock is paved and accessible. An exploration of the Atsinna Pueblo requires a bit more of a hike to the top of the cliffs. And for the record, there are flush toilets at the visitor center. And a drinking fountain. How life has changed.

Well, mostly changed. I just spent a long time telling you "I was here", but I suspect my version will not last as long as Oñate's or Eulate's.
Posted by Garry Hayes at 11:40 PM

Thanks for all the historical detail, and the photos, Garry. Very interesting... I think I need a drink of water now.