The Abandoned Lands...A Journey Through the Colorado Plateau: A real Hole in the Wall

Some places can only be described as a real hole in the wall...this one for instance, in the Mojave National Preserve in Southern California. Also, may I add, we need state legislators like we need another hole in the head (more on this later). 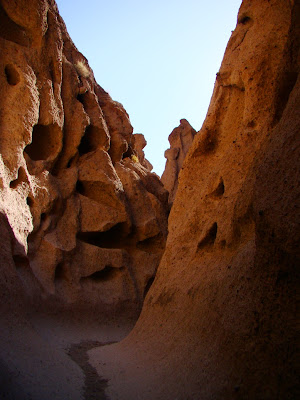 It was the first morning camp of our trip. The previous day was spent going 450 miles, so our stops were limited to the open-pit borate mine at Boron, and the parking lot at Calico Ghost Town, the subject of the previous post. Today we would have the chance to explore a little bit. We had spent the night at the Black Canyon Group Campground at Hole in the Wall within the Mojave National Preserve, but had arrived in the dark and couldn't see much. We awoke at an ungodly hour since the sun was our alarm clock (I had no idea the sun was rising so early these days). In the space of an hour, our group of 34 people would need to pack their gear, load the vans, eat a quick breakfast, and prepare their lunch. 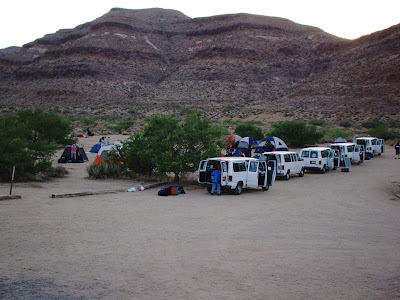 We quickly discovered that the cool morning hours were the best time for any kind of presentation. For some reason, brains steeped in 100 degree temperatures for 8 or 10 hours seem incapable of learning much of anything. Our anthropology professor talked about the Shoshone and Piute cultures of the eastern Mojave Desert at the Rings Trailhead (below). 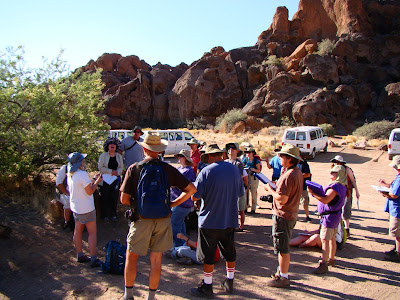 We were beginning to realize that we were in a bizarre landscape. We were surrounded by strange tan and brown colored rocks with intricate holes and weathered surfaces. You wouldn't know it to look at it, but there is a deep crevice cutting through the rock cliff in the picture below. That is Banshee Canyon, where we would soon be walking. These rocks were clearly different than those that we had seen on our trip across the western Mojave Desert the previous day. There had been contorted sediments, red volcanic necks, and bouldery outcrops of granitic rock, but now we were looking at mesas and buttes of flat-lying rock with an unusual pattern of weathering. What's going on here? 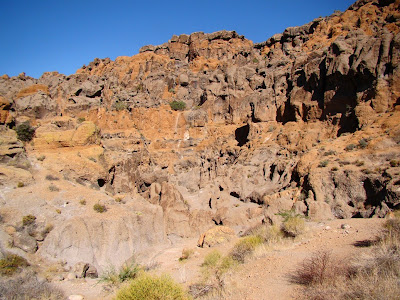 I try to imagine things this way...it is 18.5 million years ago. You can put yourself in the picture if you want, but humans weren't around for this one; you might have been a camel ancestor, or a three-toed horse. You might have been a rhino ancestor, or an elephant. Maybe a predator like the Amphicyon "bear-dog". You've been living all your life on a savanna. One day there is something new happening...a cloud rises on the horizon, higher than any other ever seen. It is not noticed by the grazing animals, but the rumbles are; the ground is shaking and there is a vibration in the air. The animals startle and begin stampeding, but do not know which way the danger lies, so their movement is aimless.

Soon the danger is apparent. The hills to the east are covered by a rapidly moving ground-hugging cloud. The heat is not yet felt, but the sounds are heard. The animals try to escape to the west, but there is no escape; the cloud is moving at more than 100 miles per hour, faster than any animal can run. The animals are overwhelmed and incinerated. The entire landscape is buried a few hundred feet deep in powdery ash and chunks of rock carried along in the inferno. The rock was so hot as it landed that it hardened into solid rock immediately, becoming a welded tuff. 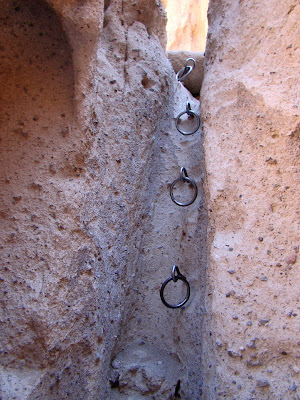 Unsensed by any of the now perished inhabitants of the region, a gigantic hole has just collapsed thirty or forty miles to the east. Something on the order of 100 cubic miles of rhyolite (silica-rich) ash has just exploded from the Earth's interior, leaving behind a circular caldera 10 to 12 miles wide.

In your mind anyway, you have just witnessed something that no modern human has ever seen, the eruption of a giant rhyolite caldera, a literal civilization ender. Similar eruptions produced the depressions at Yellowstone National Park, Jemez Caldera in New Mexico, and Long Valley Caldera at Mammoth Lakes, California. The layers of ash are called the Peach Springs tuff. Another way of understanding the scope of this eruption is to realize that the village of Peach Springs from which the tuff takes its name is about one hundred miles to the east. 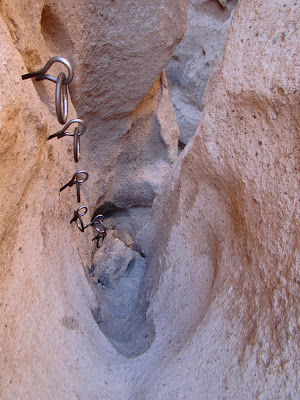 A short trail winds through the tuff exposures. A few short climbs are necessary, and rings have been embedded in the rock to help out. It is a fascinating place to explore! 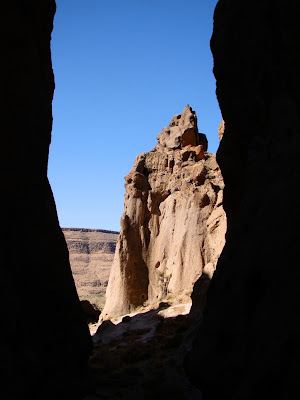 After a few minutes in the slot canyon, the trail breaks out onto the desert floor and circles the butte for a mile or so. This is high desert, and there is a wide variety of plants to identify (and in the case of the jumping cholla, carefully avoid!). 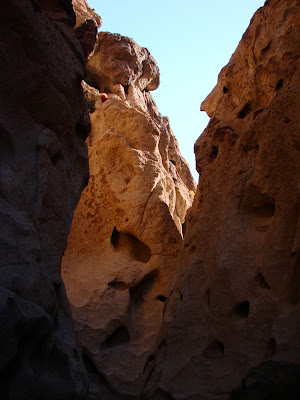 The weird cavernous weathering is called tafoni, and it is the strange holes that give the region its name. They arise from differential weathering of the tuff brought about by variations in the cementation of the tuff, and once started, by the continued presence of dew on the shadowed interior  of the holes after the sun has evaporated water on the outer surface of the rock. 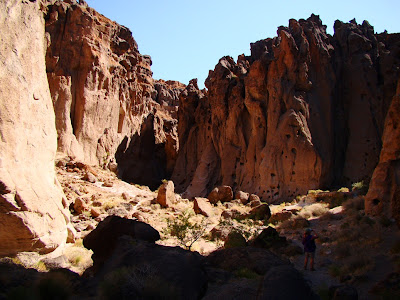 The Hole in the Rock campground complex is our new favorite place to stay in this region. It was a nice discovery for us, brought about because of the irresponsibility of our California state legislators. Providence Mountains State Recreational Area is only a few miles away, with the beautiful jewel of Mitchell Caverns as a main attraction. It was the first casulty of the state's stupid policy of closing state parks instead of promoting them. There are some last second machinations going on to try and keep most of the parks open, but it is too late for Providence Mountains; the last two rangers retired, and expensive repairs to the water system were needed. They closed the park last year. They abandoned it, and the worst has already happened: vandals have done grevious damage to the park facilities. 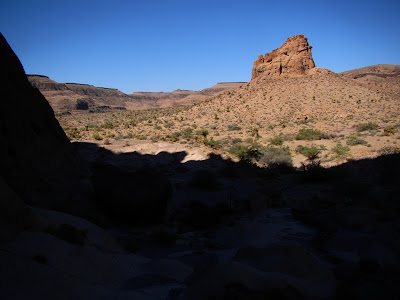 Abandonment is to be a theme of this series, and it comes in many forms. It would take but a few pennies from each inhabitant of California to keep Mitchell Caverns open and viable as a park, but we've apparently left it to history. As we came around the last corner we saw an earlier form of abandonment, perhaps of an involuntary type: petroglyphs of the native Americans who once roamed the region in nomadic bands. 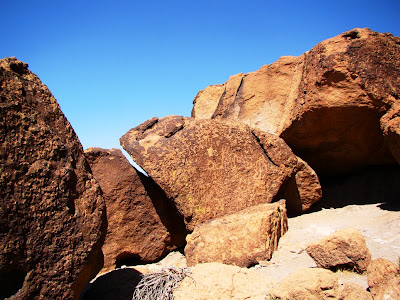 I noticed some dry blood on the rocks while I was in the slot canyon. I thought maybe an owl was a bit sloppy while consuming the night's catch, but when I got back to the parking area, I found that the blood actually belonged to one of my students. The day was getting complicated...