The Abandoned Lands...A Journey Through the Colorado Plateau: The Little Colorado River IS little but the canyon it's in isn't

How many times in your life have you been able to look straight down a thousand feet?

There aren't that many places where you can do such a thing, and even the Grand Canyon doesn't drop a thousand feet straight down in very many places (although there are a few, as visitors to Toroweap can attest). The Grand Canyon is vast almost beyond measure, but the cliffs intermingled with slopes has a way of separating the viewer from the full immensity of the depth the canyon. I think of it as much like looking down a set of stairs: You see the steps but not the risers.

There is a less known canyon that is intimately related to the Grand Canyon. It is the canyon of the Little Colorado River. The Little Colorado drains a vast region across central Arizona, but the drainage is mostly arid, and it has been a rare event for me to see water flowing down the canyon, though I know that flash floods can be spectacular events. 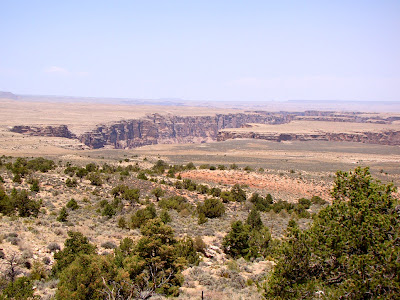 Leaving the Grand Canyon from the east end at Desert View, the traveler drops down the East Kaibab Monocline onto what first looks like a wide plain. Although the rocks are colorful (parts of the region are referred to as the Painted Desert), they don't seem to display much in the way of cliffs, except for a hint of deep precipices in the distance (above). We are now on the Navajo Reservation, and speeding down the highway, one can almost miss a pair of turnoffs pointing to some viewpoints of the Little Colorado River. Passing a gauntlet of jewelry sellers, one walks out to the point and finds a stunning canyon... 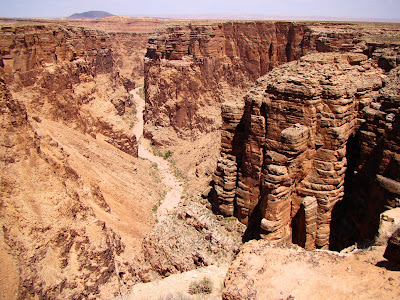 The Little Colorado River occupies a relatively shallow valley over most of its length, but when it approaches the Grand Canyon, the gradient steepens, and erosion has produced a thousand foot deep gorge cut through the cliff-forming layers of the Kaibab Limestone and Coconino Sandstone. The main Colorado River has cut a mile-deep canyon, but in doing so, it has re-energized legions of tributary streams, and they have also cut incredible canyons that in any other setting would be national parks of their own (the two viewpoints are designated as a Navajo Tribal Park) 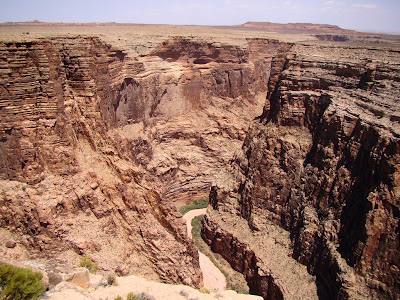 Where the Grand Canyon is vast, the Little Colorado River Gorge is "intimate", if that is the right word. You are looking at a canyon that feels as if you could throw a rock across, but a thousand foot gulf lies between. The perspective is difficult to see in the picture below, but from the edge of the point, the drop is vertical to the canyon floor below. 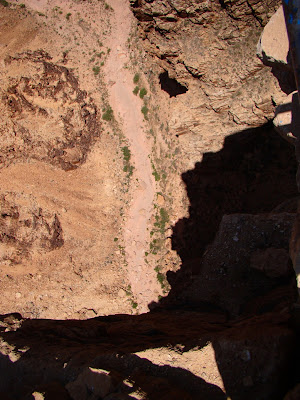 Exploring the Grand Canyon? Don't miss this gem on your way to Flagstaff or Page!

This canyon must be the inspiration for some of the landscapes in the "Wiley Coyote and Roadrunner" cartoons.

How have I missed these viewpoints on all my travels that way? Hmmm.

My wife Sarah and I were just reminiscing about the geology trips we took with you. We took many of your courses while at MJC the two week trip to the south west was by far the best! I believe it was the summer of 2004. I'm very excited to see that you are still teaching the courses. Have a safe trip and hopefully none of the vans blows a radiator hose this trip! Maybe we'll sign up for a refresher course soon!

correction it must have been the summer of 2005. I found a picture of the death valley trip in 2005 on your site. ( year of the floods and flowers) Sarah and I are in the back left corner of the picture ( im lifting up her hair)
Take care

Hi Chris and Sarah! I remember the two of you...it's good to hear from you.