The Abandoned Lands...A Journey Through the Colorado Plateau: Not so much abandoned as obliterated

The Colorado Plateau is a fascinating place to explore. The scenery is beyond compare, and the geology is laid bare in the arid environment. It is an excellent place to teach because of the way the story of the region unfolds. So much of the journey involves looking at rocks and structures that formed in a sequential fashion, and are part of a coherent story.

And then there are those things that come right out of left field, features that are so out of place that they serve only to teach the uncertainty of life on planet Earth. Meteor Crater is one of those places. There's no particular reason that it should be on the Colorado Plateau and not somewhere else. But there it is, out on the plains of Arizona.

The region around Winslow and Holbrook in Arizona is desolate, flat, and basically uninviting. It's one of those stretches where the students can catch a nap because the instructor can't really think of anything to say over the CB radio as we drive through. Even the kitschy Route 66 developments seem worn out, and many are abandoned and falling apart.

But then, there is sort of an interruption in the flatness off to the south of the freeway. We know what is there, but it doesn't really look like much in the distance. We turn off the freeway and drive up the access road.

More than a century ago, this spot was called Franklin's Hole. As obvious as it seems today, the origin of this 550 foot deep hole was not clear at first. Most people figured it was some kind of volcanic feature, even after chunks of iron and nickel were discovered (not to mention a total lack of volcanic material). 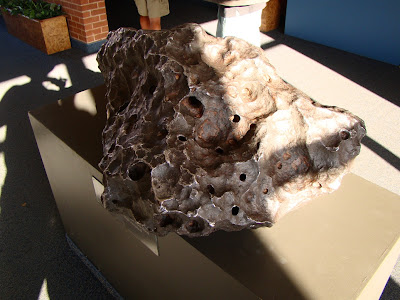 Part of the problem of accepting a meteor origin of the hole was that expectation that the original chunk of rock was still intact and buried under the crater. The meteorite is thought to have been about 150 feet across, which would be quite a find, and I have a feeling that a lot of money was lost drilling holes in the bottom of the crater. As it is, the largest bit of rock weighed 1,400 pounds (it's on display in the museum-see the picture above).

It really sparks the imagination. 50,000 or so years ago, a big chunk of rock hit the Earth's atmosphere  at 26,000 miles per hour and flared brighter than the sun. It hit the ground creating a massive explosion, leaving behind a crater 4,000 feet wide and 700 feet deep. It is a bit scary to contemplate the effect of such a collision in the present day. Not an extinction-level event, but devastating to anyone unfortunate enough to be anywhere nearby (the meteorite that caused the extinction of the dinosaurs is thought to have been several miles across). The impact actually caused the layers of Kaibab Limestone and Coconino Sandstone to rise and fold over on themselves, so the stratigraphy is inverted along the crater rim. 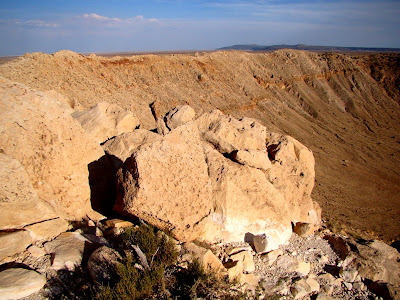 The crater is privately held, but the owners have done a nice job of preserving the crater, and it is well worth a visit. They are very accommodating for geology field trips if you contact them in advance. 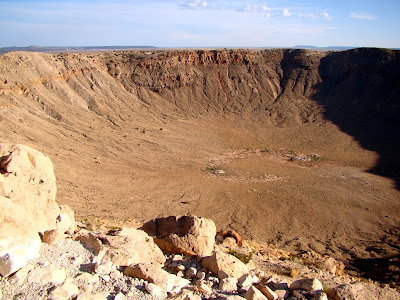 For more information about visiting the crater, check out http://www.meteorcrater.com/.

Look here for an explanation of my "abandonment" theme for this series: http://geotripper.blogspot.com/2012/06/abandoned-landsa-journey-through.html
Posted by Garry Hayes at 1:22 AM

This is really amazing. I'd love to be able to visit this place.