The Abandoned Lands...A Journey Through the Colorado Plateau: Where the Rivers Changed Direction

...it's gone away in yesterdayNow I find myself on the mountainsideWhere the rivers change directionAcross the Great Divide...

Abandonment as a theme for my current blog series about the Colorado Plateau doesn't always involve people and cultures. It can include rivers and other natural features as well.

Peach Springs Canyon and Diamond Creek provide the only vehicular access to the Colorado River in the entire length of Grand Canyon. As noted in a previous post, it is a spectacular introduction to the geology of the Paleozoic and Proterozoic rocks of the region. The route also reveals a neat little riddle.

Peach Springs Canyon is a very deep gorge, one of the larger tributaries of the Grand Canyon. Peach Springs Creek is a dry wash most of the time, but it would be understandable that it could have been carved by huge flash floods over the years. But what gets interesting is that Peach Springs Canyon also has tributaries, and they are also huge. But they also have practically no drainage area that could efficiently collect cloudburst runoff. How did these tributaries get carved? 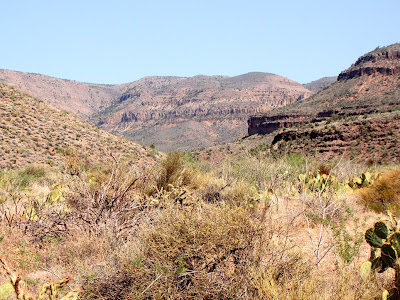 It gets better...check out the GoogleEarth image below (click it for a larger image). Why do the winding canyons bend away from the linear fault-line creek bed, and then bend back? And notice how they don't drain in one direction, but instead each canyon has a drainage divide, with water flowing two directions from a high point within each gorge. Shouldn't a drainage in a single canyon segment be one way? 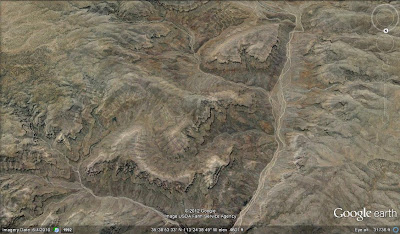 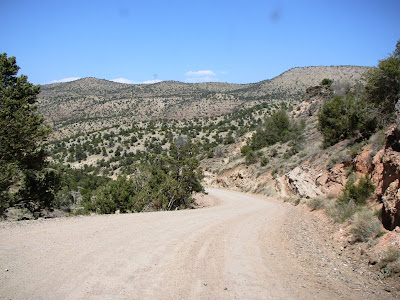 As one starts down the road into Peach Springs Canyon, the rolling hills reveal sediments that are filling some of these odd tributary canyons. and they are old sediments; some are as old as Paleocene, the earliest part of the Cenozoic era which began 65 million years ago. These abandoned channels were carved in latest Cretaceous time. These tributaries are older than the present day Grand Canyon! Much older...they've been exhumed by the carving of the present day Colorado River. But these valleys may once have been inhabited by the dinosaurs!

Today, the Peach Springs area lies near the western edge of the Colorado Plateau. The Basin and Range province lies to the west and south, a much lower area on average, providing an avenue for the Colorado River to reach the sea. 65 million years ago, the region was much different. What are today the low areas of the Basin and Range were once a high mountainous region that we call the Mogollon Highlands. Rivers drained from these highlands through the Peach Springs region, carving the channels and canyons towards the northeast, pretty much the opposite direction that the Colorado Plateau flows today. At some point in the last few tens of millions of years, the rivers changed direction through a combination of headward erosion and stream piracy, and ultimately the "old" Colorado River of Colorado and Utah was diverted west and the Grand Canyon was the happy result.

What an incredible adventure of the mind! The history of the Colorado River and the carving of the Grand Canyon have been complex problems that have kept some of the very best field geologists busy for decades, and the full story of how the grandest canyon on the planet came to be is still only partially complete. For more information, check out

that is so wild! thanks for the story