The Abandoned Lands...A Journey Through the Colorado Plateau: Walnut Canyon...Would you have been one of them?? A thought exercise: you've lost your house...to foreclosure perhaps. The sheriff kicked you out so quickly that you had to leave most of your belongings behind. Maybe it was the family farm. Your parents and grandparents were buried there in a family plot. You've been locked out and will never able to return.

How do you feel about the new owners who take over the property? Do they have the right to dispose of your things as they see fit? Do they have the right to bulldoze the trees in the family cemetery and put a minimart on top of the graves? (Actually, I think I have an idea for a horror movie...someone call Steven Speilberg). Okay, maybe it wasn't you who lost the home, maybe it happened a hundred years ago, in Ireland, or Scotland, or in Senegal? How long do we have a right to feel like our family heritage has been molested? Is 800 years too much? Say a family castle in southern Europe that was built by your forebears in the 1200's?

Around 800 years ago, the Sinagua People felt they had to abandon their lands. We don't know why...long term drought is suspected as a cause, although that would be ironic for a people whose name means "without water". They often lived in parts of the central Colorado Plateau that did not have secure water sources, including Wupatki (see one of my previous posts), and Walnut Canyon, southeast of Flagstaff. They left behind entire villages in the cliffs at Walnut Canyon, a place that is protected today as Walnut Canyon National Monument. 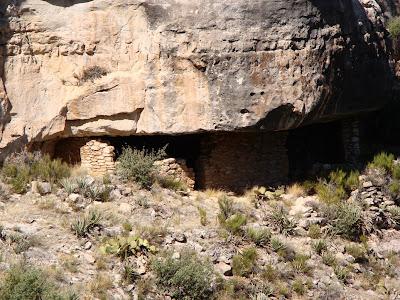 I visited Walnut Canyon as a 10 year old, and I was fascinated with the place. Here were abandoned homes and villages, it seemed like hundreds of them spread on the alcoved cliffs of Kaibab Limestone. I combed over the floors of each of the small rooms like a young Indiana Jones. I wasn't interested so much in the walls that remained; I wanted to discover things. Things like pottery sherds, arrowheads, the evidence of the lives that were lived here. Somehow I knew that I would see what the hundreds of thousands of tourists who were there before me had missed, if I looked hard enough. 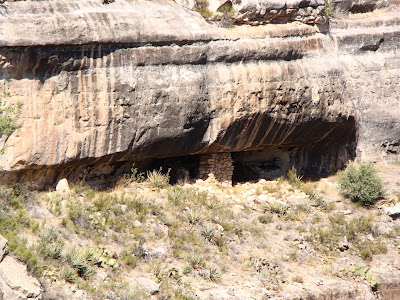 It occurred to me even then that maybe I needed to be looking at the dwellings that weren't on the tourist trail. You could see them off in the distance, their remoteness (and the stern signs prohibiting access) making them a magnet of my desires to search and discover what obviously must be hidden just off the trail. Oh, how I wanted to climb up into these mysterious dwellings!

I found out many years later that in the late 1800's it was a tradition for Flagstaff residents to take a wagon ride out to Walnut Canyon to search the ruins for pottery and other artifacts, and that many thousands of artifacts disappeared into local households. These former homes of the Sinagua People had been plundered of their treasures and destroyed many decades before I happened upon the scene. Sometimes the pothunters used dynamite. Now that I was an adult, the very thought infuriated me. How could they allow such a desecration to take place? It's not even justified to say that the Sinagua People no longer exist. Their descendants live in the pueblos of New Mexico and on the Hopi Reservation (To their absolute credit, it was the work of many citizens in Flagstaff that resulted in the formation of the national monument in 1915. They were horrified at the destruction that was taking place. I am not aware if the descendants of the Sinagua were ever consulted.).

I felt a similar sense of disgust and indignation when a river runner told me many years ago that he had the mummified remains of an Anasazi child in his garage. This was on the same river trip that I was told that the walls of the seemingly pristine ruins that we saw on the San Juan River had been repaired three or four times after pothunters had winched them down to get at burial sites. Pothunters are criminals, pure and simple. If you are having trouble understanding this, imagine if someone was digging up the remains of your grandmother for the purpose of stealing the jewelry she was buried with. 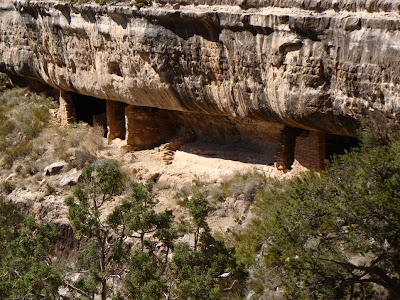 The exhilaration of discovery, whether it involves a gold nugget in a stream, a dinosaur bone in the desert of Utah, a perfect topaz crystal in a rhyolite tuff, or an unbroken Puebloan pot from 800 years ago is like an addictive drug. There is nothing quite like it. It is easy to condemn pothunters who are interested only in selling their finds. Can we judge the people of Flagstaff and other nearby communities for taking artifacts a century ago who were only after the thrill of discovery?

Likewise, how do you judge the little kid who collected square nails at a ghost town in a state park and was enraged when his father told him to put them back? They were just pieces of rusted iron. And what about the kid who finds a beautiful spearpoint high on a mountain ridge miles from any actual archaeological site, and keeps it? What harm could it do? I have to face the fact that the little kid was me. It took me years to outgrow the desire to possess, and I also know for a fact that if I lived in Flagstaff a hundred years ago, I would have been one of the plunderers. 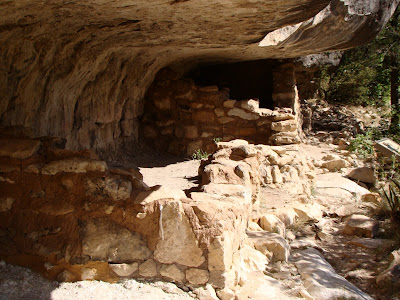 I have not had the rush of finding an intact pot in a cliff dwelling. I like to think that over the years, I've developed the judgement to leave it in place and notify the authorities of the discovery, but I know that won't be my first impulse. What would you do?

Here is the explanation of my "abandonment" theme for this series: http://geotripper.blogspot.com/2012/06/abandoned-landsa-journey-through.html
Posted by Garry Hayes at 10:49 PM

Even though I know better, an artifact find would be a great temptation. Thank goodness there are now laws in place to protect the ancient items. But in the old days, I'd have been a looter.