The Abandoned Lands...A Journey Through the Colorado Plateau: There is at least one forest in the Southwest that won't burn this year... 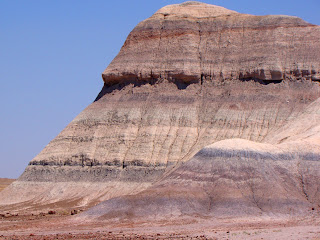 We continue our journey through the Abandoned Lands, the empty landscapes of the Colorado Plateau. We arrived at the national park the next morning and got a look at one of finest places to study Triassic history anywhere...the Chinle formation (or Group) is a complex sedimentary sequence that preserves a record of river floodplains and lakes that spread across Arizona, Utah, and several other states at the dawn of the age of the dinosaurs. Some of the earliest dinosaurs ever discovered have been found here.

But the neat thing about the Triassic is not the little dinosaurs. They had not really reached their dominance of the terrestrial ecosystem at this point in time. There were other creatures, some of them absolutely terrifying...like the phytosaurs. 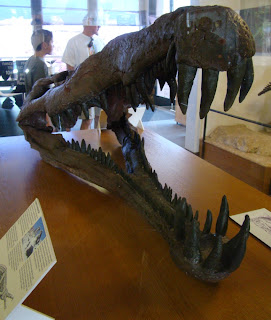 Can you imagine wandering lost through a swamp and running into one of these? Phytosaurs resembled crocodiles, but were different in a number of ways. Some of them were also big...like 35 foot long in some instances.

There are lots of other creatures found in the sediments of the Chinle. The odd looking creature below is a Placerias hesternus, one of the therapsid reptiles, sometimes called the mammal-like reptiles. Huh? Since when is a reptile anything like a reptile? Well...when they have a more upright stance than reptiles, when they have differentiated teeth including fangs, and when they may even have been endothermic, i.e. warm-blooded. The therapsids were in fact the ancestors to the mammals, who appeared in latest Triassic time (they then presumably provided the dinosaurs with protein for the next 100 million years before an asteroid wiped out the reptilian overlords).

All told, the park is one of the richest Triassic fossil beds in world, with 200 kinds of plants, and dozens of therapsids, phytosaurs, amphibians, and early dinosaurs. But wait (as they say in late-night TV ads), there's more! 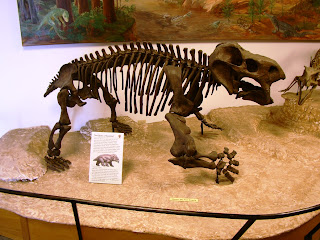 The floodplain and channel deposits make for some incredibly colorful badlands scenery. The bright colors result from the oxidation of metals in the clays, especially of iron. The clays are so easily eroded that soils don't develop easily, leaving behind a maze of gullies and channels. 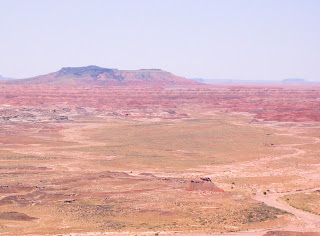 There is a whole section of the park devoted to wilderness. No trails to speak of, but lots of interesting places to wander. 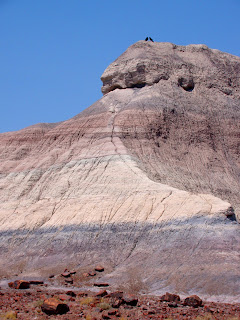 The park's riches extend to the human history as well. Abandoned lands? Yes. Few people live in the region today, but there is an 8,000 year history of human habitation. 600 archaeological sites are known within the park boundaries. 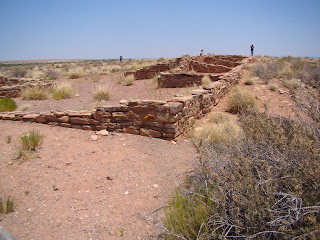 There are some outstanding petroglyphs as well. Lots of them... 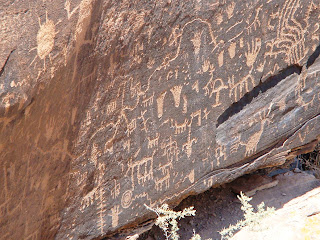 Including this one. What do you see? Some think it is a dinosaur eating an unfortunate Puebloan, but others see a heron eating a frog. Of course, why would someone draw a bird eating a frog? Seems kind of ...ordinary to me. 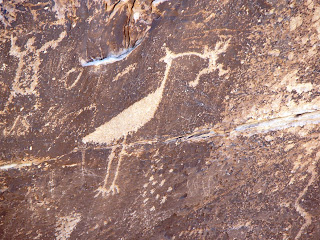 Hmmm...I think I'm forgetting something. What is it? Oh yeah, I don't think I've mentioned what park we were exploring. It was actually originally established to protect some unique fossils: the petrified wood. I wonder how many parks have been missed because someone thought it was a sort of "one-note" place? Petrified Forest National Park? Why stop there? I see petrified wood in the curio shops all the time. Someone who thinks that is really missing out. The park is a fascinating place.

Most of the fossilized trees were carried from forests in surrounding highlands during floods. They were buried and the wood decayed away but was replaced by silica (quartz, in the form of agate and chalcedony). The wood is strikingly colorful; a lot of petrified wood from elsewhere occurs in pretty plain colors, but here there is a veritable rainbow in practically every sample. Entire trees, 100 feet long or more, are common in many parts of the park.

Petrified Forest is another place that suffered a lot of abuse before it became part of the national park system. Train passengers in the late 1800s stopped at the nearby station and walked off with tons of rock. A company once proposed to grind up the petrified wood to be used as an abrasive. Local citizens sought park protection as early as 1895, but it was 1906 before Teddy Roosevelt designated the site as a national monument. It became a national park in 1962.
Theft is still a problem...apparently something like 12 tons of petrified wood get stolen every year. For what it is worth, stealing wood from the park carries a pretty serious curse. If you ask, the folks in the visitor center will show you the notebook filled with letters from people who had bad things happen to them while they possessed the stolen contraband. Legally collected wood can be purchased outside the park (they even give some away free; to get you inside the store, of course). If you are willing to do the legwork (mapwork?), you can find hundreds of square miles of Chinle formation on public lands (BLM) where non-commercial collecting is allowed. 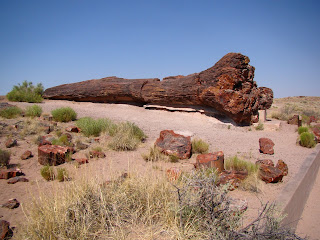 In the meantime, if you are ever flying by on Interstate 40 and wonder if Petrified Forest is worth your time, well, I say yes, it is. And this is a forest that will never burn down, no matter how bad the droughts get...

Here is the explanation of my "abandonment" theme for this series: http://geotripper.blogspot.com/2012/06/abandoned-landsa-journey-through.html
Posted by Garry Hayes at 12:12 AM

Makes me wonder if it was a creature like the Placerias hesternus that left tracks on the Coconino sand dunes.

Haven't been to Petrified Forest in many years. Hope there's still some wood left when I do get back.

Curious... is there any evidence that, in the last few 100's to 1000 years, the area has been wet enough to support herons and frogs? That would be pretty amazing!

The village where the petroglyphs are found is along the banks of the Puerco River, a tributary of the Little Colorado. It has a pretty big drainage area, so I suspect it was a more permanent water source in the past.

The park is still an amazing place for modern wildlife. Monsoons bring heavy summer rains and following them thousands of spadefoot toads come out a night. It is also a bird watchers paradise.

And if anyone is worried about missing the petrified wood don't be, there are literally thousands of logs in-situ throughout the park and absolutely no basis at all to that 12 tons a year nonsense. Expect to see that go away soon.