The Abandoned Lands...A Journey Through the Colorado Plateau: Wupatki and Sunset Crater

When our field trip last month showed up anywhere, there was no longer any sense of abandonment...we were our own traveling traffic jam. The land that we were in felt abandoned, though. The northeast edge of the San Francisco Peaks Volcanic Field is exceedingly dry, and the volcanic rocks are so fissured and jointed that whatever water does fall from the sky seeps into the ground quickly and disappears. It's hard to imagine a civilization thriving here, but the pictures on today's blog reveal that people did indeed live here, for a century or so, but then they abandoned the region, perhaps for better agricultural prospects elsewhere.  It's certainly pretty barren today... 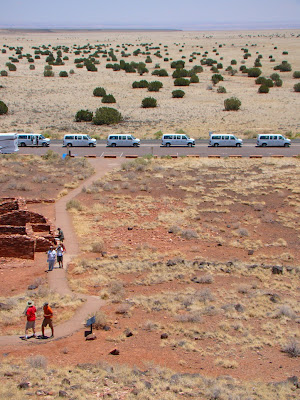 Welcome to Wupatki National Monument north of Flagstaff, and the adjacent Sunset Crater National Monument, site of one of the youngest volcanic features of the state of Arizona. There is a connection between the two parks...many of the dwellings were constructed in the decades following the eruptions at Sunset Crater around 1065-1085 AD. Some archaeologists attribute the population growth at the time to water retention capability of the volcanic cinders that blanketed much of the region. In some models, the new surfaces of cinders enriched the soils and caused a sort of "land rush" that brought different peoples together. 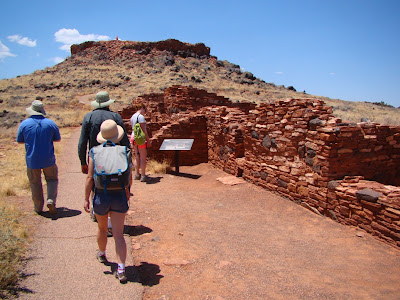 There was a mixing of four different cultures in the area, the Kayenta Ancestral Pueblans, the Sinagua, the Cohonina, and the Hohokim, and they left behind some impressive ruins. Our visit included an exploration of the Citadel (above), a 50 room complex, and Wupatki Village, a 100 room village. The Citadel Pueblo is glued to the top of a lava butte, and the walls merge almost seamlessly with the basalt flow. 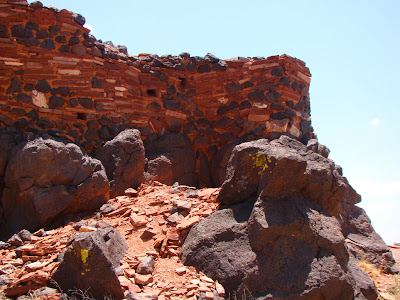 The peaks of the San Francisco Peaks dominate the scenery. The mountain peaks are the ragged edges of a hollowed out stratovolcano which has not been active for several hundred thousand years. The summit may have been destroyed by a giant landslide similar to the one that precipitated the eruption of Mt. St. Helens in 1980. 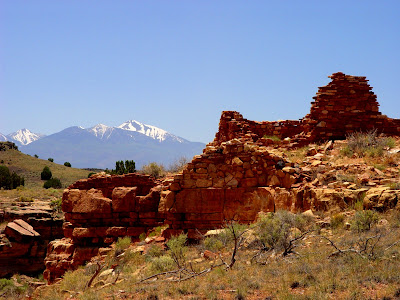 The largest pueblo in the monument is Wupatki Village, which is unique both for its architecture and for its mixing of cultures. There is a "ball court" that reveals a cultural connection to the Hohokim to the south, an amphitheatre that is characteristic of the Sinagua people, and T-shaped doorways that are typical of the Ancestral Pueblans (formerly the Anasazi). 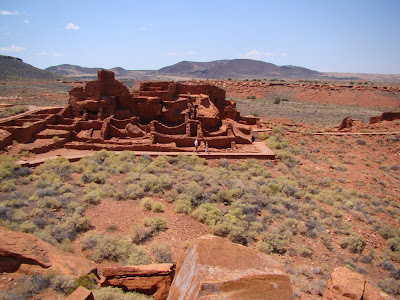 Like the Citadel, the buildings seem to grow out of the rock. The rock includes the shale and sandstone of the Triassic Moenkopi Formation which formed in mudflats and river floodplains. For building walls, they used red slabs of Moenkopi sandstone, yellowish slabs of Kaibab limestone, and chunks of basalt. 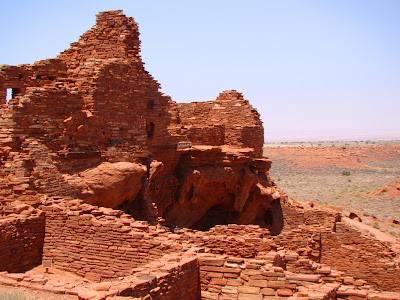 Why was the site abandoned in the late 1200's? I don't know, and neither do the archaeologists. The Native American cultures in the southwest today have their perspective, and their oral histories. The region is so marginal for agriculture that drought seems likely to have been involved, and one can imagine a series of cascading effects: food shortages, growing competition for the best growing sites, invasions from outside cultures, and so on. All one can really say is they were there, and within a few years they were somewhere else.

It isn't just an academic exercise to understand all the factors involved 800 years ago in the abandonment of the region; we are in the midst of a serious extended drought today, and there is a strong potential that the drought is related to climate change (in late June, Wupatki had only 15% of normal precipitation). The consequences of extended drought will occur whether politicians deny global warming or not. The Colorado River doesn't have enough water to meet demand in normal years. What happens when drought becomes the new normal? How will our society in the southwest cope? 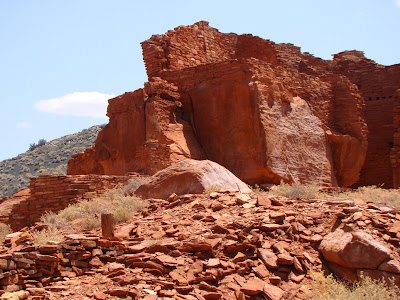 Later on we stopped briefly at Sunset Crater, the possible cause of the "land rush". The cone in the background did not exist 1,000 years ago. 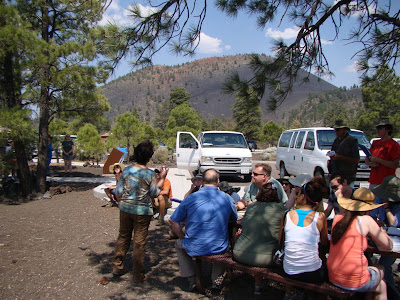 Here is the explanation of my "abandonment" theme for this series: http://geotripper.blogspot.com/2012/06/abandoned-landsa-journey-through.html
Posted by Garry Hayes at 9:28 PM

Wupatki is fascinating. But be thankful you weren't there today with tornado warnings. Did you say climate change.

Wow, that looks amazing! Super interesting. Also, though, looks kinda blasty hot, no? That freaks me out the cone is less than 1,000 y.o.

So, since you are geology guru and I am geology ignoramus, would you be willing to look at the mystery rock here (http://biobabbler.blogspot.com/2012/07/gaylor-lakes-glory-whatevs-part-1.html) and tell me what's up (via comments there)? I literally was thinking while in the field, "Hey, I'll take a picture of it, so maybe Geotripper can tell me what it is." So, I did.

So, whatizzit?? =) THANKS for whatever you have time for. I also have 2 other shots of it, if you need.