The Abandoned Lands...A Journey Through the Colorado Plateau: Beginnings

The soil. And water. It's everything.

No matter how many toys we invent, the cars, the computers, the planes, all the things we call the necessities of life, without soil we are done for. Without water, life withers away. We all depend on it, no matter how far removed from the land we have become.
The land that is my home, the Central Valley of California, is not likely to be abandoned any time soon. The soil may be buried under the thousands of suburban houses constructed in the last few decades, but it will reappear and eventually it will be tilled again. Global warming may alter the climate of my nearby Sierra Nevada, superfires may remove the forests, but the valley will always have some water, and some kind of growth will always be possible. This is not the kind of place that humans will ever totally abandon, short of some kind of nuclear holocaust.
The Colorado Plateau and the desert lands that surround it are different. Life is always on the edge. There is soil here and there, and water exists in some places, but much of the plateau is barren rock. Life is subject to the vagaries of drought and heat and wind. Life is not easy...

I know I am being dramatic, but this was on my mind as we set out on our two-week journey across the plateau. We drove through 200 miles of the Great Valley, watching the land change from savannah to desert, where agriculture was only possible because of vast transfers of water from wetter climates to the north. We turned east at Bakersfield and crossed the Sierra Nevada at Tehachapi Pass into an even drier climate, the Mojave Desert. It was a hot day, hot as blazes. We were comfortable in our air-conditioned vans, and were making good progress. In my last post, I mentioned how cities were possible out here only because of the vast transfer of energy and supplies from other places. A bad accident and the subsequent back-up of traffic was a reminder of just how much material moves across these roads each day. It takes a lot to maintain our chosen standard of living. While we were stuck, the van's cooling systems were strained to the limit, and the thin boundary between us and the inferno outside narrowed. 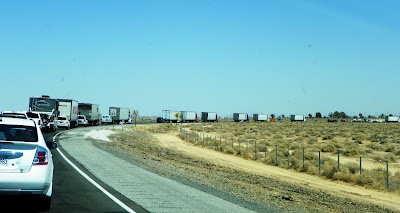 It was inconvenient, the long wait, but for others it was tragic, a truly terrible accident. Having seen the cars involved, it was hard to believe that everyone survived, but there were serious injuries. The accident was a shock, but we needed to change gears and start the learning process. Because of the time delay, we found it necessary to change our itinerary, and instead of visiting Rainbow Basin, we pulled into the parking lot at Calico Ghost Town near Barstow. . 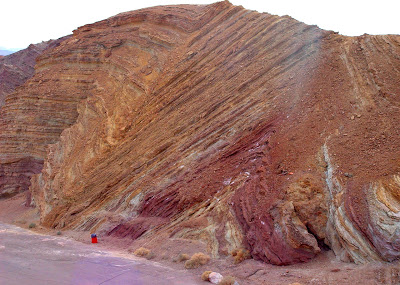 Calico was an important silver mining district in the 1880's and 1890's, and in the early 1900's it was a source of borate minerals. The minerals played out and the town was abandoned. Years later, Walter Knott took some of the buildings to Buena Park and rebuilt them into the core of Knott's Berry Farm. The remaining buildings were ultimately given to San Bernardino County for development as a park. 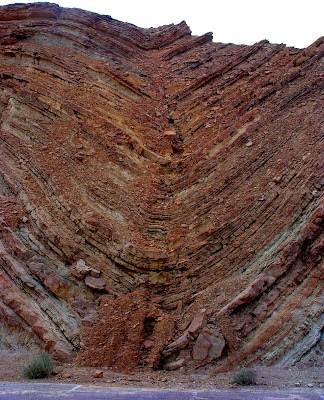 We weren't interested in the shops and boutiques up on the hill; we were drawn to the marvelous folds in the parking area. Textbook examples of anticlines and synclines were present in Miocene terrestrial sediments of the Barstow and Jackhammer formations. This was a place to learn the basics of geology: formations, sedimentary environments, structural geology, and sedimentary rock identification. 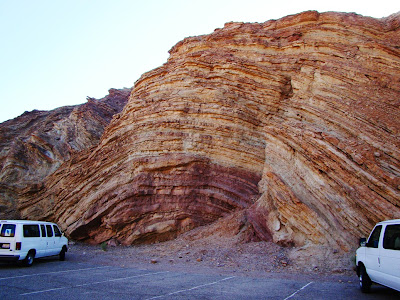 There are excellent examples of sedimentary structures like mudcracks and ripplemarks. They aren't common in the parking lot, but fossils elsewhere in the formation reveal an ancient savannah environment occupied by the early ancestors of camels, horses, antelope, elephants, sabertooth cats, dogs, and bears. 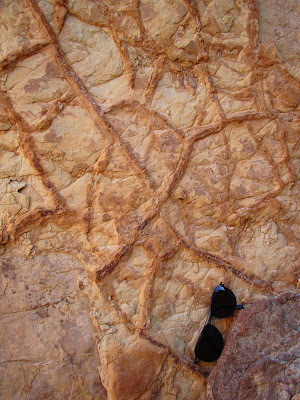 For our anthropology students, there was a nineteenth-century trash dump on the other side of the parking lot. We did a quick exercise in dating of cultural sites. 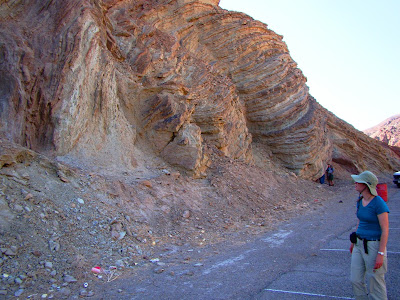 So, in a parking lot we laid the groundwork for understanding the basics of our respective sciences as we journeyed further into the desert's interior.The hour was late, and we had several hours of driving to get to our camp in the Mojave National Preserve. We packed into our vans and moved down the road.

Here is the explanation of my "abandonment" theme for this series: http://geotripper.blogspot.com/2012/06/abandoned-landsa-journey-through.html
Posted by Garry Hayes at 12:21 AM

Awesome photos - esp. of the folds.

I didn't know about the Calico parking lot, I will check it out, thanks! OTOH I know that stretch of 58 too well, I hate it.