The Abandoned Lands...A Journey Through the Colorado Plateau: And not a single sentient being ever laid eyes on the mountains 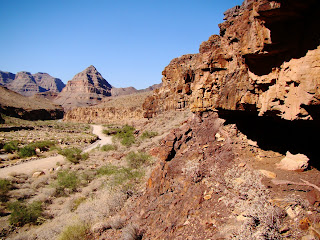 What an incredible story can by told by rocks that are not there! Seriously, the Grand Canyon is full of rocks, but some of the most important parts of the geological story emerge when we realize just how much rock is missing. In the picture above, erosion has scooped out a small alcove on the right side. The rocks forming the roof of the alcove are crossbedded sandstones that formed on a beach around 500 million years ago. The rocks underneath are composed of schist and granite pegmatite (an extremely course-grained type of the plutonic rock) that date to between 1.4 and 1.8 billion years. The picture below shows a typical intrusion of the pegmatite between the layers of schist. What's missing? Just a billion years or so of geologic history! 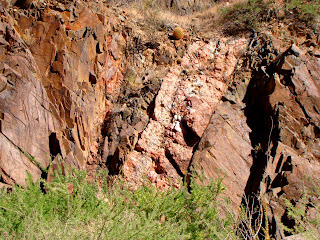 Imagine: An ocean in the tropics...but no palm trees, no coconuts. No visible life at all except for a hint of green in the water; single-celled microorganisms rule the ecosystem. The air is unbreathable, as there is only a fraction of the oxygen we find in our atmosphere today. Our own world would be a foreign place to visit; we would need spacesuits to survive.

On one horizon, a landmass...it is large, more than a thousand miles across, the core of the North American continent.  It has existed already for most of a billion years. In the other direction, an island is visible in the distance. It is also large, hundreds of miles long. The two lands are on a collision course. It is not an overly fast collision, as they approach at the stunning speed of three or four inches a year. But over millions of years, they collide, first disturbing and folding the sediments on the seafloor between them, and then a vast mountain range grows as one land mass is pushed up and over the other. And within a few tens of millions of years, a second island collides, pushing the mountains even higher. A vast range now extends across the edge of the continent, from what is now the southeastern United States to California, and an unknown distance westward.

It was a mountain range that no eyes ever saw. Eyes would not develop in this world for another billion years. No trees ever graced its slopes, not a blade of grass, no terrestrial life at all. The mountain was composed of barren rock, and was touched only by snow and flowing water. But no life. The mountain range was pushed to great heights, and erosion tore away at its flanks. Over several hundred million years the mountain range was eroded away until it was a low plain, interrupted here and there by low hills no more than a few hundred feet high. The rocks that now lie exposed were once buried 12 miles deep in the crust. They have been changed by the extreme heat and pressure into schist and gneiss. 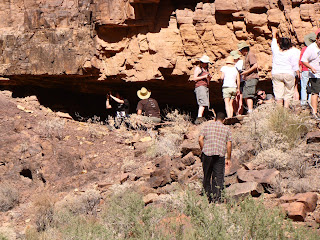 It is that surface that my students are exploring in the picture above. They are laying their hands on the core of a mountain range that no eyes ever saw, but whose existence is indicated by the rocks and by the erosion surface. 500 million years ago, a rising sea covered this region, leaving behind a sequence of sandstone (the Tapeats), shale (the Bright Angel), and limestone (the Muav). John Wesley Powell, the leader of the first team of people to navigate the Colorado River through the Grand Canyon, called the surface the Great Unconformity.

The Great Unconformity was one of our objectives while traveling down the Peach Springs Road into the Grand Canyon on our trip last month. In 21 miles we drove 4,000 feet into the canyon to the Colorado River at Diamond Creek. I'm not superstitious or anything, but in May we only got to the 17 mile mark before our car broke down, so this time our vans made the trip to the river without stopping, except for the rather incredible distraction of a herd of Bighorn Sheep grazing by the road. 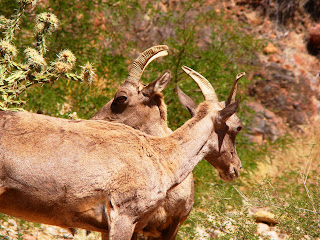 Yeah, we get sidetracked by furry mammals every time... 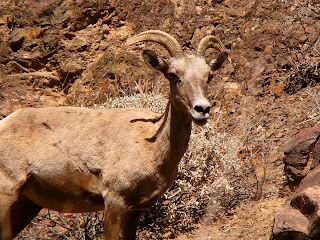 Back on the road, we made it to the river at the head of Diamond Creek rapids. I had not been this close to the Colorado River in the Grand Canyon in many years, and had forgotten what power the river exudes, even as her water is processed through dams and reservoirs. The river ran fast and surprisingly cold. It was a relief in the 113 degree temperature. 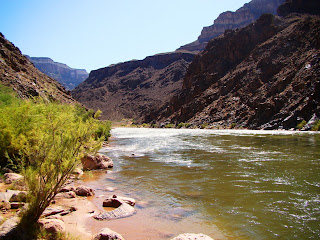 After cooling off in the water, we started back up the road, with several stops to visit the Great Unconformity and to have a look at the formations that are the most difficult to see and access from the rim of Grand Canyon. We were able to see the sandstones of the Cambrian beach, lying over the unconformity. 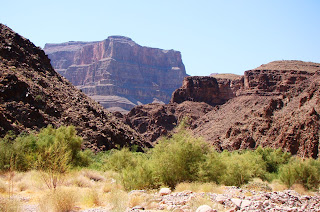 A few hundred feet higher, and we were able to check out the former muds of the Bright Angel Shale. We could see the trails of worms, trilobites and other creatures that squirmed and disturbed sediments for the first time in three billion years of Earth history. Ripplemarks can be seen in the picture below, on the left. 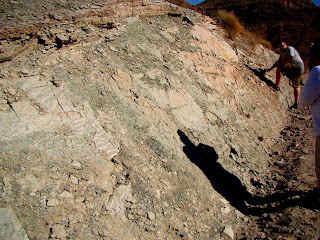 The Bright Angel Shale yields under pressure, and if not buttressed from below, it slides readily. A huge slide block was visible in the canyon wall on the west side of the Hurricane fault. The exposure of Bright Angel in the picture below is tilted about 45 degrees despite being sandwiched between horizontal layers. 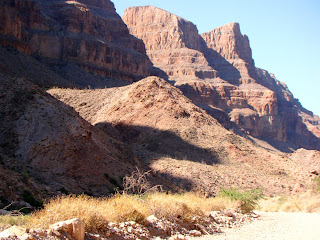 Up close, the deformation of the greenish shale and siltstone is obvious.... 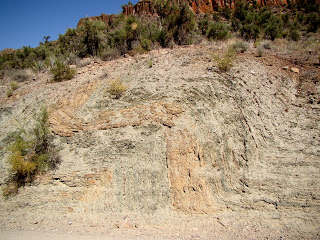 The road to the bottom of the Grand Canyon, the only road to the river, is a fascinating journey. It is all gravel, it's bumpy in places, and the entrance fee is pretty steep. I didn't mind paying it, as tourism is essentially the only income for the Hualapai people who own this part of the Grand Canyon. But it provides unparalleled exposures of the Proterozoic rocks of the Grand Canyon Metamorphic Suite, the Paleozoic Tonto Group (the Tapeats, Bright Angel, and Muav formations), and the Devonian Temple Butte Limestone, a layer that is almost impossible to see from the rim of the Grand Canyon in the national park. 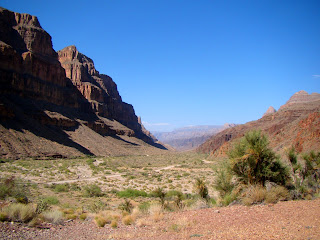 We made it back to Peach Springs without incident, and headed to our campsite on the south rim of Grand Canyon. Between our exploration of Hole in the Wall and the trip down to the river, it had been a full day! And it was only our second day out in the field...

PS: I forgot...there were more furry distractions on the way out of the canyon. I don't know how wild they were, given the rope on one of them, but there they were on the open range.... 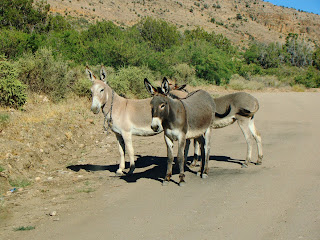 Wow, Garry - this is fantastic! You and your group must have been thrilled and excited by examining and touching these rock formations. I love the notion of the rocks which are NOT there! Thanks so much for sharing (including the furry mammals!).

You are right. The story of what is no longer there is even more fascinating - just like the way mystery makes art more beautiful.