The Abandoned Lands...A Journey Through the Colorado Plateau: Three Grand Canyons in one 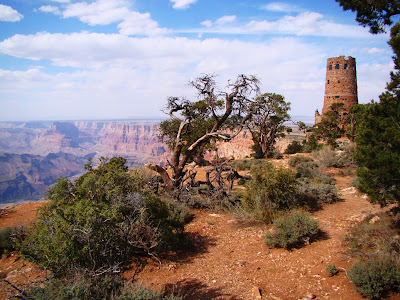 The Grand Canyon is one of those extraordinary places that becomes even more extraordinary the more you look at it. Just about everyone has seen pictures of the place and understands on some elementary level that the cliffs and slopes within the canyon reveal some sort of story about the Earth's history. Interpretive signs at the park go to great lengths to describe the shallow seas, river floodplains, and desert sand dunes that formed the colorful canyon walls. What gets less press is the fact that the most visible part of the Grand Canyon, the Paleozoic-aged horizontal layers, tells a rather limited story. It is true that the Paleozoic era was pivotal in the history of life on this planet, with the origin of complex life, the first fish, the first amphibians, the first reptiles, and the beginning of the dominance of insects and other arthropod species that continues to this day. But the Paleozoic era only encompasses around 300 million years, from 542 million to 251 million years ago, out of an Earth history that spans 4.6 billion years.

And there are even huge chunks of time missing from the Paleozoic layers that are present in the Canyon. The Cambrian is represented by three formations (the Tapeats, Bright Angel and Muav formations), but rocks of the Ordovician and Silurian periods are missing entirely. The Devonian period is represented by a single discontinuous layer, the Temple Butte, as is the Mississippian (by the prominent Redwall Limestone). The Pennsylvanian and Permian periods are recalled by the Supai Group, the Hermit formation, the Coconino Sandstone, the Toroweap formation, and the Kaibab formation, which forms the rimrock of the Grand Canyon. All told, there are about 4,000 feet of Paleozoic rocks in the Grand Canyon. A patchy record, albeit very scenic and dramatic.

Of course, the horizontal layers aren't the whole story. I wrote an earlier post about the ancient rocks of the Inner Canyon, the gneiss, schist and granite of a long-gone and never seen mountain range that formed 1.7 billion years ago. We were able to see these rocks on our journey down Peach Springs Canyon and Diamond Creek and we were able to lay our hands on the Great Unconformity that divides the older rocks from the Cambrian sediments. But the Grand Canyon has other secrets hidden in its depths, and they aren't as easy to access. But you can spot them from the rim in the right places. 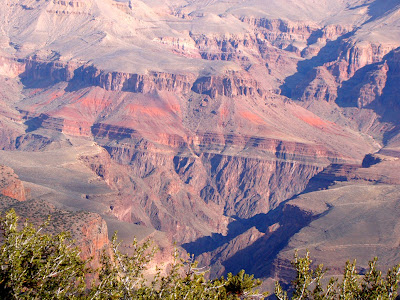 There are three more Grand Canyons down there. Not as in deep canyons, but as in the thickness of the sedimentary rocks. The Grand Canyon Supergroup has an aggregate thickness of 12,000 feet, more than three times that of the more familiar Paleozoic sediments. And they represent a lot more time, around 500 million years.

500 million years is a long time. The last 500 million years or so of history include all the Paleozoic events mentioned above, but also the rise and fall of the dinosaurs, and the rise of the mammals, the birds, and of course at the very end, humans. The rocks in the Grand Canyon Supergroup encompass the period from 1.2 billion years to around 700 million years ago. 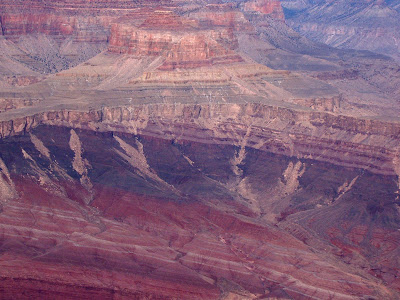 How do you fit 12,000 feet of sedimentary rocks into a canyon only (only!) 5,000 feet deep? You tilt them! And the tilting event hints at an even more extraordinary story: there is another mountain range that existed here, a mountain range that is almost entirely gone, and like the earlier range was never seen by sentient beings. Eyes had not yet evolved in the world, and neither had life emerged on the land (and the seas held only unicellular life forms).

The story goes something like this: after the Mazatzal Mountains of 1.7 billion years ago wore away, they left behind an essentially flat surface near sea level. As a result of lands sinking, or sea levels rising, this surface was inundated under shallow seas for a time, and covered by river floodplains at other times. Intrusions of basaltic rock sometimes erupted at the surface, producing thick lava flows (the Cardenas Lavas, the black layer in the picture above). In late Proterozoic time, many of the continents were massed together in a percursor supercontinent to the better-known Pangaea: Rodinia. Rodinia was beginning to fall apart at the seams, and faults formed around rift valleys. The rocks of the supergroup rose and were tilted into a series of mountains and valleys not unlike the Basin and Range province of today. The mountains rose thousands of feet into the air, and erosion tore at their flanks. Eventually nothing was left but low ridges a few hundred feet high. The continent split completely and a large landmass that included Australia and Antarctica rifted away from western North America. The continental edges subsided and the sea started to transgress across the region in Cambrian time. The flatlands were covered with beach sands and the ridges persisted as islands for a time until they too were submerged (one of those islands is visible in the picture below where the cliff of purplish Shinumo Quartzite and magenta Hakatai Shale pierce the overlying Bright Angel Shale). 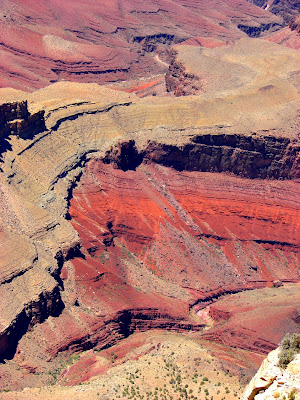 The only way to see the rocks of the Grand Canyon Supergroup up close is to hike to the bottom of the Grand Canyon. Seeing them up close on my first geology field trip in 1976 was a pivotal event in my life: many hard to understand principles clicked into place during that journey. The rocks can be observed quite well from viewpoints in the eastern part of the South Rim, especially Desert View, Lipan and Moran Points. Samples of the rocks of the many formations of the Supergroup can be viewed along the "Trail of Time" that extends from Yavapai Point to Verkamps Visitor Center on the South Rim. A picture of some algal stromatolites, one of the few kinds fossils found in the Supergroup, is shown below. 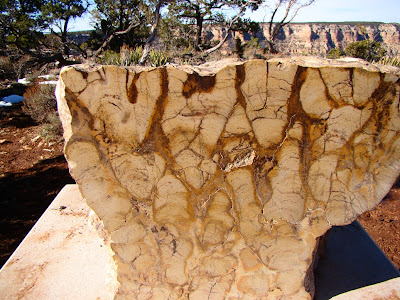 In an odd way, the Grand Canyon Supergroup played a role in making the canyon livable for humans. The easily eroded rocks of some the layers produced some flat areas deep in the canyon at Unkar Delta. This allowed soils to develop and made agriculture possible, so a village was built down there a thousand years ago. 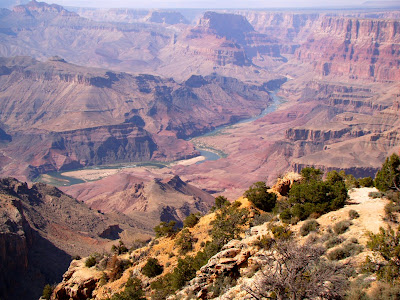 Three Grand Canyon sequences in one. Two mountain systems hidden in the depths of the canyon. Profound unconformities. I love teaching about geology when I am here. I was obviously enthusiastic last month when I was lecturing my poor overheated students. They were polite enough, but a number of tourists gathered while I was talking, and afterwards they had lots of questions!
Posted by Garry Hayes at 4:42 PM

You are a natural and should be a Park Ranger.

I've tried in the past, and will try again, I'm sure! Sounds like a decent way to spend summers in retirement...

Fascinating. I sure wish I could have had the chance to accompany you on a trip or at least have had you as a teacher--you make geology come alive for this retired entomologist!