The Stacks are Odded Against Me...The Southern Coast of Oregon

If you have read this geoblog for any length of time, you know that I have a special spot in my heart for California. We get maligned for smog, traffic, riots, wildfires, and whatnot, but there are reasons so many of us live here. It's got some of the most wonderful geology in the world, and the geology makes it an interesting place to live...the hills and bay of San Francisco, the mountains surrounding Los Angeles, and the coastal hills of San Diego, for instance. I've spent a lot of time talking about the Other California, too, the places that are not so well known. And then there is the coast: Big Sur, the Marin Headlands, Santa Barbara, and Malibu. All told, some of the greatest scenery to be found anywhere.

But once in a while, I am willing to grant that some other places are truly spectacular, too. I certainly love the southwest, as the blogs of the past month show (those will continue soon). But I made a trip up the coast this week, from northern California to Washington, and believe it or not, followed the Oregon coastline for the first time in my life.

I am willing to allow that the Oregon coastline is a very beautiful place to travel... 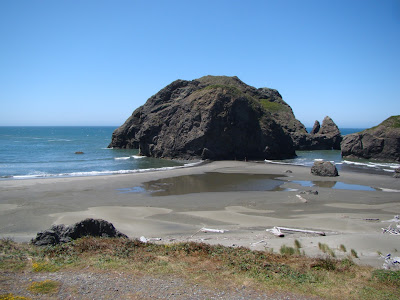 Part of the wonder of the place is the preponderance of sea stacks (hence, today's title). Sea stacks are generally defined as vertical rocks and small islands that are separated from the coastline by open water. A stack may end up connected to the mainland by a sandbar called a tombolo (above, at Myers Creek beach). 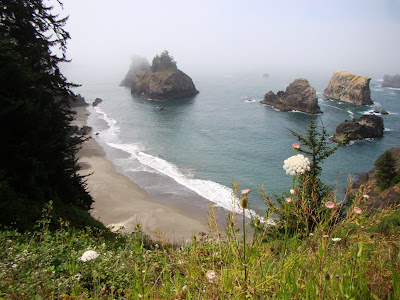 We spent the most time at Arch Rock Overlook along the Samuel H. Boardman State Scenic Corridor north of Brookings. The sun had come out, and in moments I was under the spell of this place... 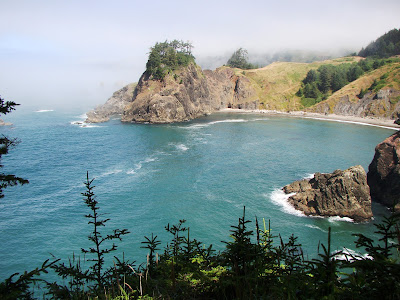 A sea arch is a sea stack or headland with a hole in it. There was a truly fine example at the...ahem...Arch Rock Overlook. 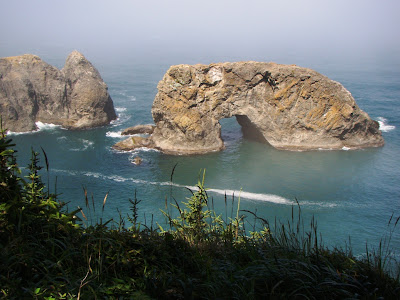 The sea stack that I loved more than any other that day was to be found at Cape Blanco. It just struck me as unique, all by itself on the beach below. Cape Blanco is the westernmost point in Oregon, and arguments have raged over whether it is the westernmost point in the United States (I guess part of the argument is whether one counts the rocks exposed at low tide or high tide). For the lighthouse aficionados among you, Cape Blanco also has the oldest lighthouse in the state, built in 1870 or so. 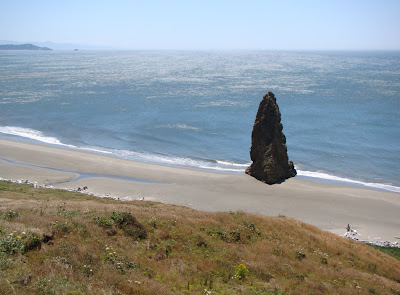 Here is the same sea stack at Cape Blanco from another angle. It really is all by itself out there! Oregonians: does it have a name? I couldn't find one anywhere. 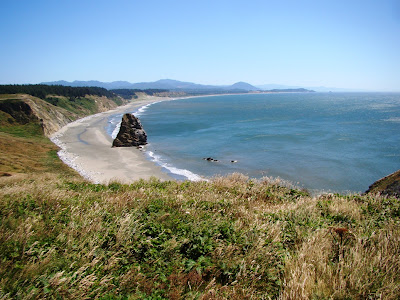 I'm still on the road, so posts will probably continue to be irregular. I love seeing new places!
Posted by Garry Hayes at 9:04 PM

Lots of great rock hounding along the Oregon coast, especially agates and shell fossils. That lonely stack looks out of place some how. Hoping to take a PNW road trip this fall after the season is over.

The Oregon coast has tons of great scenery, and great geology, too.

As you go north from Cape Blanco, be sure to stop at the Oregon Dunes, Cape Perpetua, the Rogue Ale Brewery (Newport), and the Three Capes scenic drive (south and west of Tillamook).

I believe the lone seastack at Cape Blanco is called Fin Rock. :)