The Abandoned Lands...A Journey Through the Colorado Plateau: There are some who won't give up 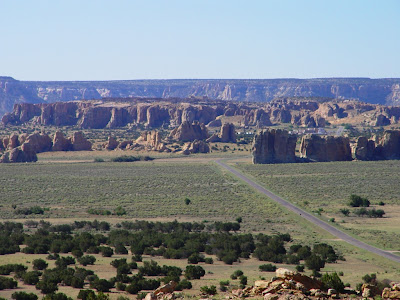 We are back on our journey through the abandoned lands, the geological wonderland of the Colorado Plateau (the journey was in June, but it takes time to tell a story). The theme I chose, of abandonment, refers to the hardness of this land, they way it can break people and their dreams. It is a beautiful land, full of fascinating geology, but it can be a hard place to thrive and make a living.

We followed an itinerary roughly following the old Route 66 through Kingman, Flagstaff (with detours to Grand Canyon, Wupatki, Sunset Crater, Walnut Canyon, and the Little Colorado River), Holbrook, Petrified Forest, and El Morro National Monument. We headed a little further south into the pueblo lands of New Mexico, going through the Zuni Pueblo, and finally to the Acoma Pueblo.

When the Ancestral Pueblo people (once called the Anasazi) abandoned their homes in the central Colorado Plateau, they did not mysteriously "disappear" from history, they simply migrated away. Many of them ended up in New Mexico, and their descendants continue to live in the region today. The people of the Acoma Pueblo are one of these groups.

In the picture above, one can see the mesas of Jurassic Zuni Sandstone that make up the landscape around the most famous village of the Acoma people, Sky City. Can you see the buildings on the mesa top (click the image to enlarge)? 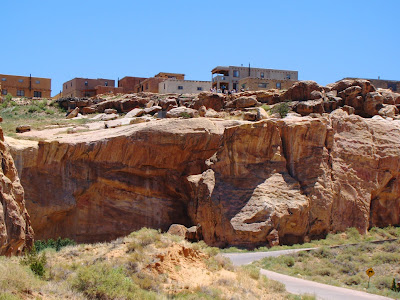 When I was growing up, I was really impressed with anything that came from a time prior to 1900 (When I was 7 or 8 years old, I figured out my grandmother was 60, and called her an antique; history doesn't record her response...). I collected stamps, coins, square nails, and anything else from antiquity. So what is someone like me to think of a place where people have lived continuously for 900 years? That is what we have with Sky City, one of the three oldest settlements in the United States. 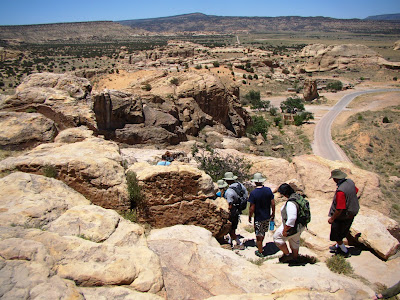 The Pueblo covers the summit of a 360 foot high mesa which historically had a single point of access, a steep trail that included steps carved out of the sandstone. A road was constructed in the 1950s when Hollywood made a movie here, but the trail is still available for visitors to explore at the end of their guided tour through the village. The short trail goes on my growing list of most spectacular trails under a half mile in the world (this will be the subject of a post at a later time). 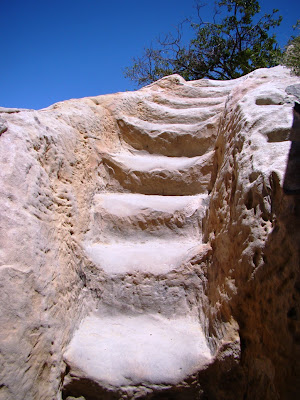 One of the water sources for the pueblo was a "tank" in the sandstone seen below. On our previous tours, the pond was full of water, but in this drought year it was dry. Our guide referred to the lone cottonwood tree as "Acoma National Forest". 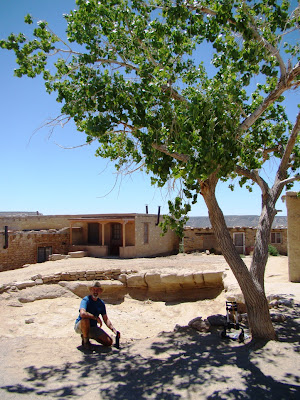 There are hints of a violent past revealed in the access to homes in the village. Many are reached only by removable ladders, making the homes into defensible spaces if invaders breach the mesa cliffs. Some of the kivas, which are usually round or oval, are hidden among the residences in square buildings, so Acoma religious ceremonies could be held in secret. 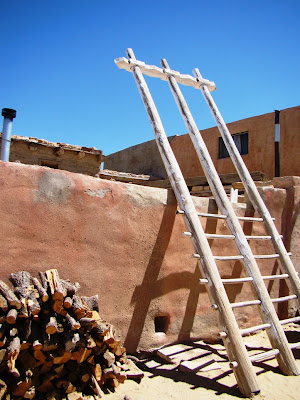 On the other hand, there is a beauty in living on a mesa top. In the picture below, a traditional kiln or oven serves as the foreground for a marvelous view of Mt. Taylor, a composite volcano that lies north of the Pueblo. The Acoma People call it Kaweshtima and consider the mountain a central part of their spiritual life. The volcano contains a wealth of uranium deposits, and a serious controversy has arisen over the issue of mining profits versus spiritual significance. The National Trust for Historical Preservation is working to protect the mountain from further degradation. 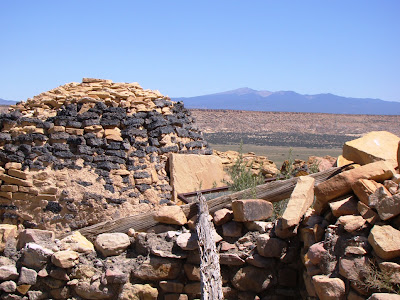 There are around 300 buildings in the mesa-top village, but only about 30 people live in the village on a permanent basis. It's not easy, with no running water and no electricity, but many more of the Acoma people spend their days in the village, because tourism is one of the most important parts of their economy. The guided tour is highly recommended. The Acoma people are highly protective of their culture, but their guides are quite open about their history. 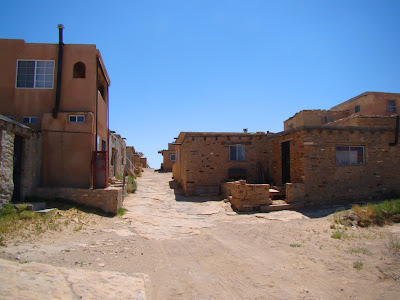 A symbol of one of the most painful aspects of their history dominates the mesa: San Estevan Del Rey Mission Church. Built in 1629, the church is the most obvious sign of the contact of the Acoma people with European colonizers. Coronado's 1540 expedition records the existence of the pueblo, and relations were peaceful at first. Unfortunately, things went sour, and in 1598 the Acoma people, fearing an invasion, attacked a contingent of Spanish soldiers, killing 11 of them. The Spanish countered in typical European fashion: they laid siege to the city in 1599 and eventually breached the south ramparts (below). They slaughtered 600 people, and imprisoned 500 more. Men over the age of 25 had a foot amputated, the women were sent away to servitude in Mexico. 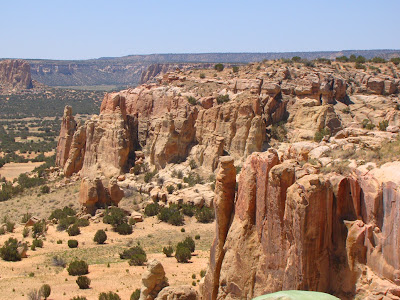 The incident is burned into the collective memory of the Acoma people. A statue of Don Juan de Oñate y Salazar (the Spanish governor who ordered the slaughter) was dedicated in 1991 near Española. In 1998, the 400th anniversary of the massacre, someone cut off the left foot of the statue, leaving a note saying "fair is fair".

The situation never got much better. The church was built with slave labor, and if I remember what our guide said, the massive beams used in the construction were carried from Mt. Taylor, 40 miles away. If the logs touched the ground, they were discarded and the transgressors who dropped them had to go back for another. Missionaries were occasionally given "flying lessons" by being tossed over the cliff. Acoma was involved with the 1680 uprising that resulted in the Spaniards being thrown out of New Mexico for twelve years. At other times they allied with the Spaniards to repel invasions by other tribes. 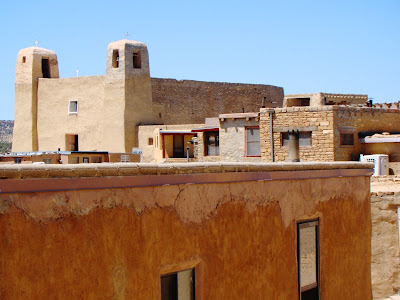 Although the Acoma people adopted some aspects of the Catholic religion and consider the church a sacred place, they still practice their original religion, which they followed in secret for centuries of Spanish rule. For me, walking through the church resulted in a clash of emotions. So much tragedy in this place. 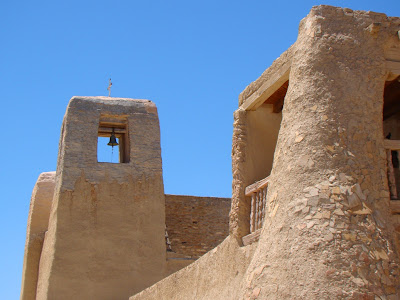 In the end, I found the village and the landscape to be beautiful. One last story about the pueblo caught my geological attention. Another prominent mesa is visible east of Sky City. It's called Enchanted Mesa, and the Acoma people tell a story of how their ancestors also lived on top of the butte. The village thrived until a landslide cut off all access, leaving four individuals stranded on top. A thunderbird swooped down and picked up the stranded villagers and brought them to the valley floor.

Archaeologists were skeptical. In 1897, A professor Libby of Princeton climbed the mesa and found no evidence of a village, but in 1924 a different expedition found plenty of artifacts around the summit area. 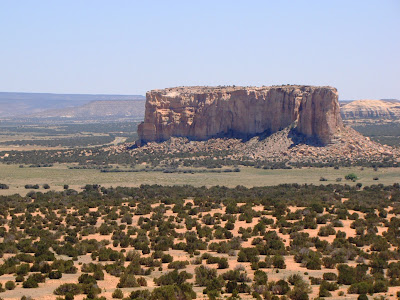 All in all, a fascinating place!
Posted by Garry Hayes at 5:48 PM