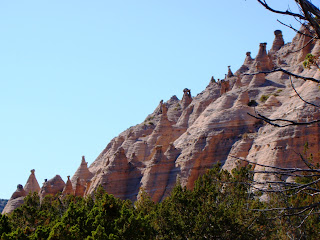 What happens when you take an arid landscape with faulting and high relief, add in some loosely consolidated poorly sorted sedimentary and volcanic rocks, and add yearly monsoon flashfloods? You get the Kasha-Katuwe Tent Rocks, a national monument located in New Mexico on the Cochiti Pueblo at the western edge of the Rio Grande Rift. This was the location of yesterday's mini-quiz, as noted by Chas in the comments.

Yesterday's post was all about looking at erosion from the bottom as we walked through a slot canyon on our way to the upper part of the mesa. Today we take a look at the upper reaches, to see what happens when erosion eats away at slopes composed of random boulders and cobbles in a matrix of finer fragments. The results are fascinating to see... 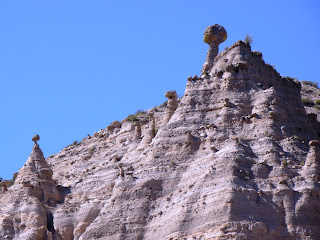 First are the pedestal rocks. Two formations are exposed at Kasha-Katuwe, the Peralta tuff (6.5-7.0 million years), and the Cochiti formation (2-6 million years). The Peralta was produced by a series of explosive rhyolite ash eruptions from the vicinity of Jemez (Valles) Caldera. The Cochiti has a mixture of sand and gravel with larger boulders. As the boulders are exposed by erosion, they protect the softer rocks underneath from erosion, forming the pedestals. 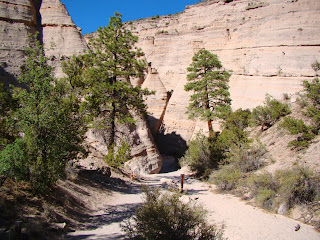 Our hike takes us through the narrows that we explored in yesterday's post... 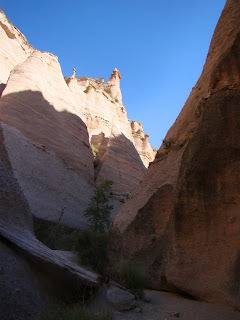 ...and we emerge into the upper canyon where some tall hoodoos can be seen high above. The trail starts climbing in earnest. 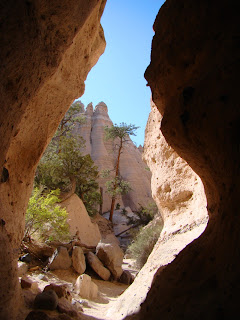 And then there is the really weird stuff...the "tent rocks". I think of a tent is being dome-shaped, but it starts becoming apparent that the tents in this case were more like the tepees of the Plains Indians. These originated as pedestal rocks, but the boulders have rolled off, leaving the softer rocks to erode into the bizarre cones. 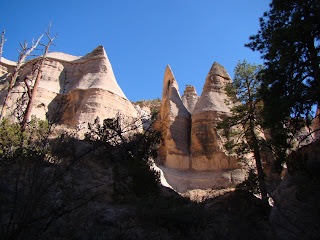 There are dozens of these odd tent rocks in the upper canyon. World travelers note the similarity to the rocks of Cappadocia in Turkey. The origin of the rocks is quite similar. In the case of Kasha-Katuwe, no one is living inside the cones as some people do in Turkey. The park area has been historically utilized by the people of the Cochiti Pueblo for hunting and plant gathering. The park was established by the Bureau of Land Management in cooperation with the Pueblo. 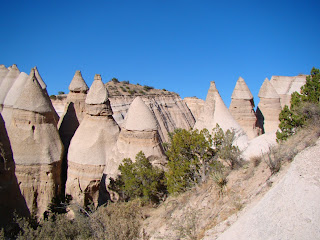 The trail ends at a marvelous lookout that provides views of the Rio Grande Rift and the distant Sandia Mountains, as well as a view into the canyons below. 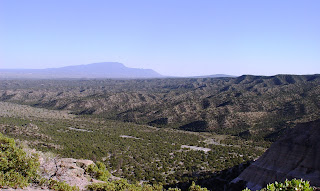 But mostly it's the "tents" that latch onto your attention. I couldn't stop staring at the odd and bizarre shapes. I headed down the trail. It was time to head to our camp outside Santa Fe, as we got ready to two pueblos whose histories went in opposite directions, Pecos and Taos. 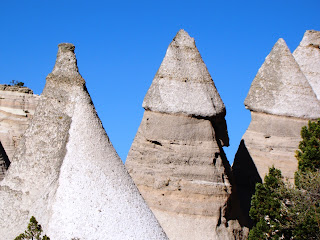 For the reasons for my odd title for this series, check out http://geotripper.blogspot.com/2012/06/abandoned-landsa-journey-through.html 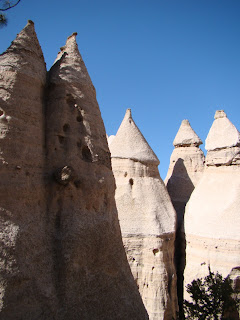 Very startling erosional processes that formed these tents. I would stare in wonder, too!
Another fine example of things that make you want to go "Hmmmm..."

Those pedestal and tent rocks are an amazing geologic phenomenon. I certainly need to add the Kasha-Katuwe to my list of places to visit.