The Abandoned Lands...A Journey Through the Colorado Plateau: The Rise and Fall of Empires... 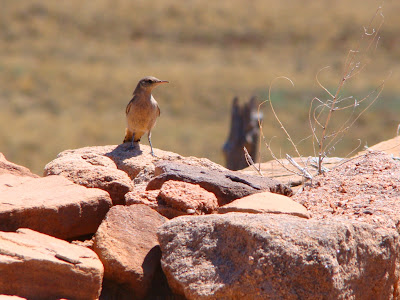 We walked along the pathway, and the only other living thing was a rock wren (I think), perched on the remains of an old wall. It was a peaceful setting with rugged mountains, the Sangre de Cristo, for a backdrop on one side, and the high Glorieta Mesa on the other. Our path took us along the side of high mound, and were it not part of a national park, non-archaeologists like myself might well have missed the significance of this spot. There isn't much left that reveals a human presence (below). 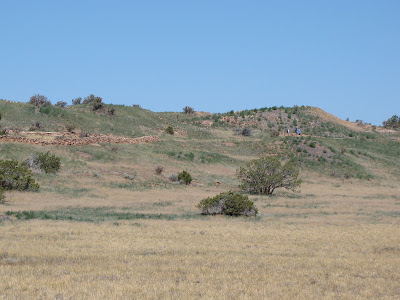 One of the most surprising things I ever found out about the city of Rome, Italy the one time I visited was that after dominating the world, the vast city that once had a population of more than a million people dwindled to fewer than 30,000 people during the Middle Ages. It must have been eerie living among the ruins. I imagine that Isaac Asimov envisioned this when he described the planet Trantor near the end of the Foundation Trilogy: the center of the Galaxy relegated to a minor farm world by history. It was on a much smaller scale, but something like this happened here, at Pecos Pueblo, now preserved as part of Pecos National Historical Park. 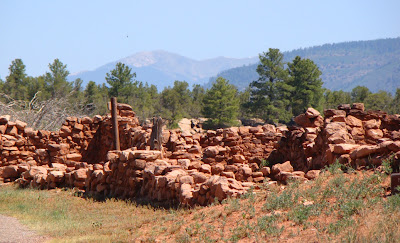 Most of the nineteen current pueblos of New Mexico were situated near the Rio Grande River, where water was dependable. Pecos Pueblo was a bit different...it was at a higher elevation, 7,000 feet, where the growing season would have been shorter, and as such, the site didn't make much sense. And yet, at the height of its power the pueblo would have 600 rooms and a population of perhaps 2,000 people. It was considered one of the most powerful of the New Mexico pueblos.

Why? As any realtor will say, "location, location, location". Pecos overlooked one of the most important passes in the American Southwest. The Great Plains lay to the east of Glorieta Pass, while to the west there is the Rio Grande Valley and the Colorado Plateau, which in turn lead to the Gulf of California, Old Mexico, and lands beyond. Whoever controlled the pass controlled the migration and trade routes of a vast region.

The site has been occupied for thousands of years, but the fortress originated about 1450. It was encircled by walls and the buildings reached as high as five stories. The Pecos people controlled the trade between the Plains Indians and the Puebloans of the Rio Grande. Able to field an army of 500 warriors, they acted as a buffer to the occasional incursions of the Apache and other aggressive Plains Indians as well as the Spaniards, at least for a time.

The Pecos people also played a part in one of the greatest pranks in history when they encountered Europeans for the first time. Coronado arrived in 1540 seeking his seven cities of gold. Perhaps realizing their peril, the Pecos people told the Spanish of the incredible cities of gold that lay beyond the pass out on the Great Plains. The Spaniards took a Puebloan guide who led them as far as Kansas before the deception was revealed (and the brave guide strangled). The Spaniards subsequently returned to Mexico and did not bother the pueblos for another sixty years. 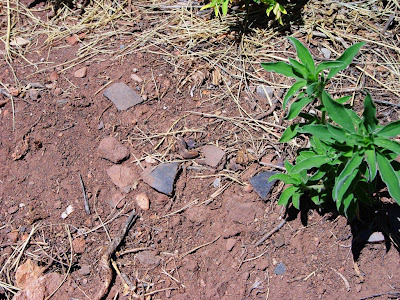 But return they did, and by the early 1600s, the missionaries were building churches across the Pueblo lands. One of the biggest was a church at Pecos that was built in the 1620s. It was destroyed during the Pueblo Revolt of 1680, and a kiva was constructed on the grounds. When the Spaniards invaded again in 1692, a new church was started on the foundations of the older church. The kiva was filled in. 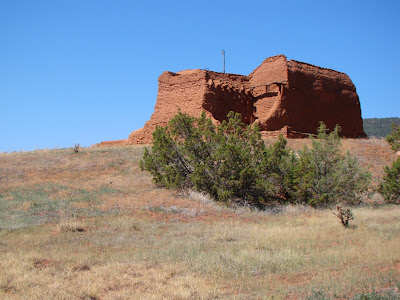 With the total control of the pueblo by the Spanish missionaries, the fate of the town was sealed. Without an army, the town fell victim to attacks by the Comanche, and European diseases exacted a heavy toll. By 1780 fewer than 300 people were left in the town. By 1838, the final inhabitants, maybe two dozen people, moved west to the Jemez Pueblo and Pecos was finally completely abandoned. After the Mexican-American War, both sides of the pass were owned by the United States, and the strategic location was no longer strategic. Except for one more war: the one between the states.

I had never really thought of New Mexico as an important Civil War site, but once again history and geography turned Pecos and Glorieta Pass into a critical prize. If the Confederacy could hold Albuquerque and Santa Fe, they could take control of Glorieta Pass. From there, a determined army could march into Colorado and move west to open up coastal trade routes that could not be blockaded by Union boats. The gold fields of Colorado and California could provide much needed cash reserves for the South.

The Confederate army invaded from Texas and took over Albuquerque and Santa Fe by 1862, and was preparing to move north into Colorado through Glorieta Pass. Well-supplied, and with high morale, they engaged the Union forces and caused the Federal troops to once again fall back. It looked like the Union was going to suffer a serious loss, but for one brilliant move on their part. The supply wagons for the Confederate forces were lightly guarded, and a contingent of Union forces climbed down a high mesa and in a surprise attack drove off the guard and destroyed the wagons and animals. The Confederate forces had more or less won the battle but lost the war. Without supplies, they had to retreat and return to Texas. They never threatened New Mexico again for the duration of the war (for a more complete version of a complex battle, check out this link: http://www.nps.gov/peco/historyculture/copy-of-battleofglorietta.htm#). 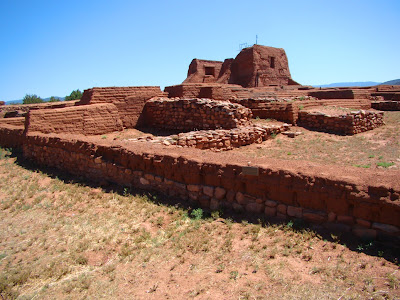 Today, the region is quiet and peaceful, and a fascinating place to visit. Pecos National Historical Park is easily missed by visitors traveling along the pueblos between Taos and Albuquerque. It is about 25 miles east of Santa Fe along Interstate 25. 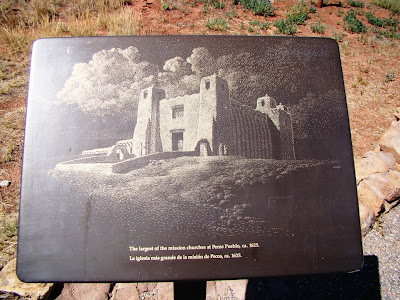 Our journey now carried us north towards Taos and the incredible Jemez Caldera. That's coming in a future post. For an explanation of my odd theme for this series, check out: http://geotripper.blogspot.com/2012/06/abandoned-landsa-journey-through.html .
Posted by Garry Hayes at 10:26 PM