The Abandoned Lands...A Journey Through the Colorado Plateau: The Rise and Fall of Empires, Part 2 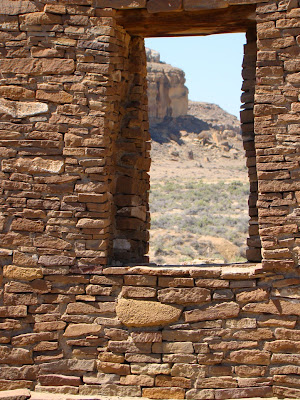 We had reached the heart of the Abandoned Lands, having done the journey somewhat in reverse, by first finding the descendants of the Ancestral Puebloans at their present day homes along the Rio Grande and other nearby regions (Acoma and Taos), and then checking out one of their 'intermediate' settlements at Bandelier National Monument. We had also seen one of their recently abandoned pueblos at Pecos.

But now we had crossed the desert and had reached Chaco Culture National Historical Park, which for around 300 years constituted the center of the Ancestral Puebloan world. We had arrived on the evening of the summer solstice, and had experienced a kind of eerie night and beautiful solstice sunrise. 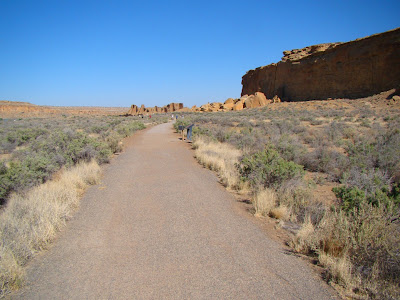 How do we know that Chaco was so important to the Ancestral Puebloans? Their descendants, for one, say so in their oral traditions. And then there is the sheer size of the complex at Chaco Canyon, something like fourteen major villages ("Great Houses") within a few square miles. There is the evidence of advance planning, as many of the building complexes are carefully aligned with the cardinal directions and astronomical and seasonal markers. And then there are the roads...
We have heard the expression that "all roads lead to Rome", but we don't usually associate roads with Native Americans. But if you look at the map above you can see that a system of straight roads led directly to the Chaco Canyon complex. The Puebloans cleared rocks and added berms in places, and when the roads encountered cliffs or other barriers, they built stairs (below). I don't think OSHA was consulted on this stairwell... 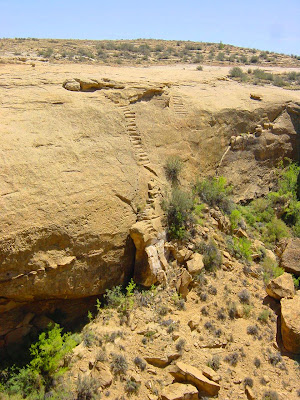 Below is a stretch of the Great North Road. The roads weren't for wheeled vehicles of course, but were instead pathways for pilgrims, and efficient routes for transporting supplies and materials, especially wood beams. The nearest forests were 40-50 miles away. 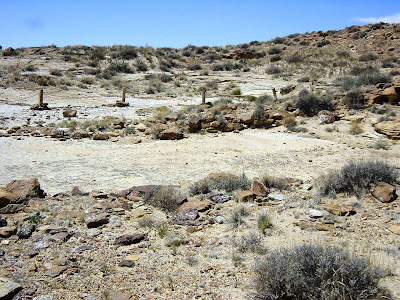 And another set of steps... 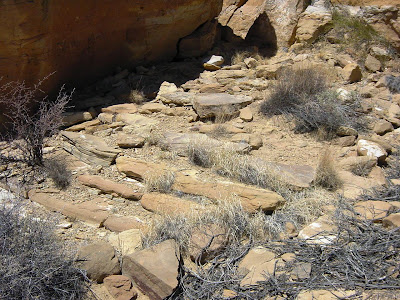 The Great Houses also reveal their spiritual or political importance in the fact that they were not designed primarily for habitation. The complexes are huge, some with 700 rooms and originally standing four stories high, but not so many hearths for warmth, for instance (and winters are cold in this region despite the desert conditions). Wandering among the ruins, one can see the thinking of the planners and architects: this place was meant to engender a feeling of overwhelming power and awe in the visitor. 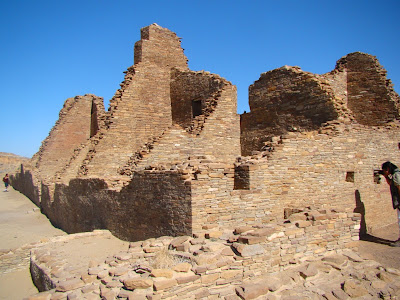 The major complexes at Chaco were built between around 850-1150 AD, and it is remarkable how well they have survived the elements for the last 900 years. These are not cliff dwellings, protected in alcoves and the like. They are out in the open and exposed to intense weathering from wind, ice and rain. Unlike many other unfortunate archaeological sites, Chaco Canyon today is in a remote location, so the buildings have not suffered as much the trepidations from vandals and early would-be "archaeologists". In addition, most of the complexes have never been excavated, and are thus protected beneath their own debris (having the walls exposed at the excavated ruins leads to rapid degradation; it is a cost associated with making a place interesting and educational to visit while trying to preserve the evidence of the past). 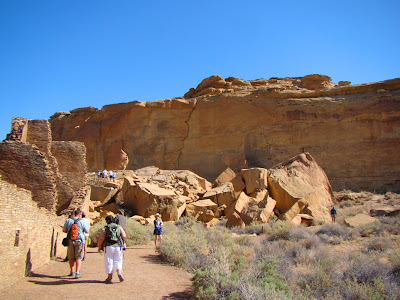 They had geological engineers in their midst, these Puebloans. Pueblo Bonito, the Great House we are touring in these pictures today, was tucked up against a cliff of the Cliff House Sandstone. The Cliff House Sandstone sits on top of a much weaker layer, the Menefee formation, and is often undercut by erosion so that large blocks of the sandstone will often tumble down the slopes into Chaco Canyon.

It was clear to the builders that a huge rock threatened the edge of the pueblo (we called the rock "Threatening Rock" in a fit of creativity). The Puebloans built a berm to try and stabilize the rock, and apparently they did a good job. It didn't collapse until 1941 (the pieces can be seen in the picture above). 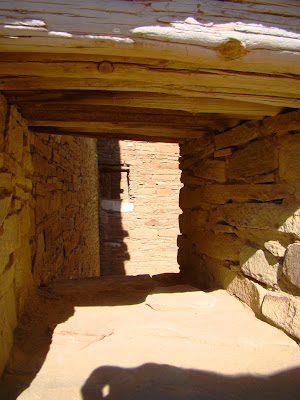 Pueblo Bonito is a fascinating place to explore, being the most completely excavated of the Great Houses. It had 700 rooms, two great kivas, and a high outer wall that enclosed an area of two acres. The level of sophistication is such that no buildings in North America exceeded this complex in size until the 19th century. 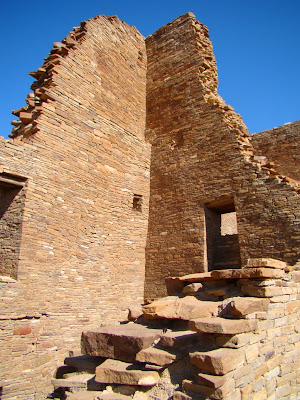 It was uncomfortably hot wandering around the ruins on this particular day, which got me thinking about water at Chaco Canyon. There isn't any to speak of. The climate is very dry with an average rainfall of 8 or 9 inches. What did the Ancestral Puebloans do for water? 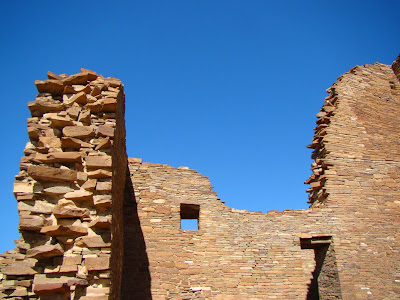 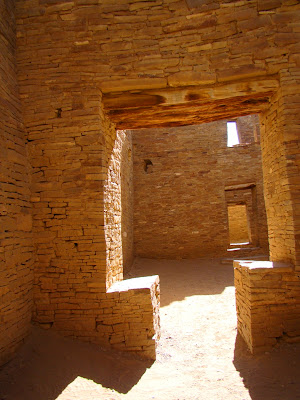 In the picture below, we can see the south wall of the complex... 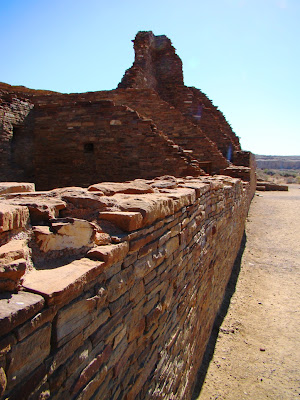 One of the Great Kivas at Pueblo Bonito can be seen below. It was big enough that I couldn't fit the whole thing in a single shot. It took some major engineering to keep a ceiling over this space. 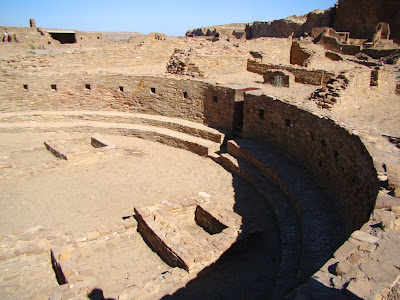 The wood used in the door beams and floors of the complex provided the means of dating the Chaco Canyon structures. Dendrochronology could be used to establish when the trees were cut down. The trees were not at all local; they came from mountains 50-70 miles away. Estimates are that 200,000 mature conifers were used in the construction of the Great Houses. 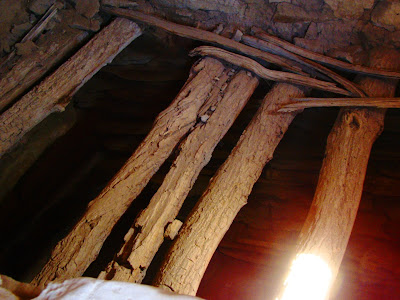 This has been just one of the fourteen Great Houses at Chaco Canyon. I'll look at a few others and deal with the question of why they were abandoned in the next post...and throw in some geology, too.
Posted by Garry Hayes at 12:42 PM

Time-travel seems such a wonderful idea here... I'd love to see how it looked with a population, travellers, events, daily life... then kick back home to all my mod cons. Wonderful photos and notes, Garry. Thanks for posting.

I really Need to see Chaco. Those walls are so thick and everything looks larger than human scale. Much like what I saw at the Mayan ruins.