A Kid in a Candy Shop...On the Oregon Coast 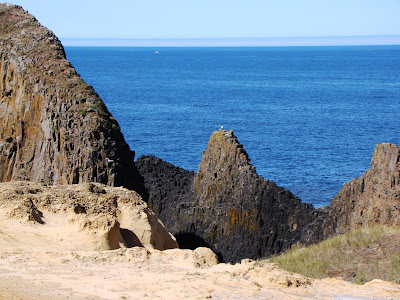 A kid in a candy shop, that's what I was the other day. All the colorful stuff, not really paying attention to the details because there was so much going on. I was covering a lot of ground in a few short hours and our stops were unfortunately brief. The pictures today come from Seal Rock State Beach near Newport, a place with no seals, but some great rocks!

It was immediately apparent that we were looking at columnar jointing in basalt. Lockwood or Dana Hunter, my Pacific Northwestern geoblogging friends, can probably say a lot more about the geology (think of them as being the clerks in the candy shop, the ones who get to see this stuff a lot more often), but what little I can find in a cursory search is that these outcrops are part of a sill, an intrusion that squeezed between sedimentary layers about 14 million years ago. 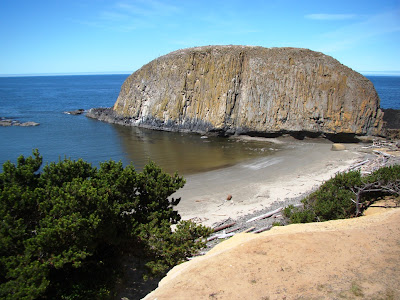 The volcanic basalt cools and contracts as it reaches (or approaches) the surface. Since the entire mass can't shrink, the rock fractures at characteristic angles and orientations. At times, the contraction fractures form prominent columns, like those at Devil's Postpile, or the Giant's Causeway in Ireland. Columnar joints are interesting in any setting, but put the rocks on a coastline, and they become spectacular! 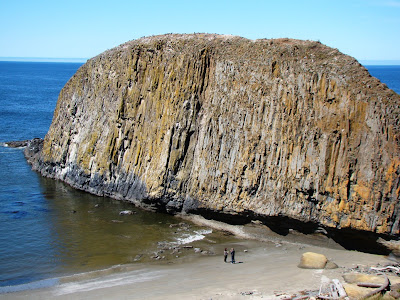 The largest outcrop is called Elephant Rock.The alcove at the base is a sedimentary layer called the Yaquina Formation. The soft underlying sandstone is easily eroded, causing the jointed rock above to collapse. In this way, the steep cliff retains its shape over time. 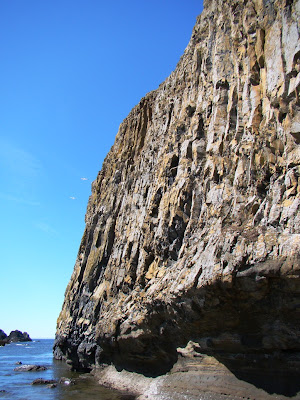 Elephant rock is the largest chunk of basalt but others form a wall of sorts along the shoreline. 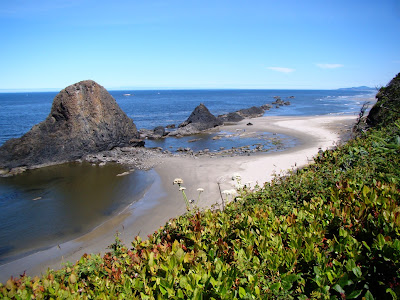 It was such a pleasant surprise to run across these rocks. I usually research my travels ahead of time, but never had a chance this time around. It's all new to me, terra incognita so to speak, and it makes me wonder about what all that I missed on this very rushed trip. It's ok...several cherished relatives have just relocated to central Oregon, so I will have some good opportunities to check these places out a bit more carefully in the future.

That columnar basalt is so amazing and looks like buildings from somewhere. More great examples along the Columbia River.

If you visit at low tide, it's even more amazing. There are tide pools in and around the basalt outcrops that are filled with sea stars and other creatures.

I teach geology and oceanography, so visiting a place such as Seal Rock always leaves me conflicted -- fantastic rocks, but fascinating stuff in the water, too!