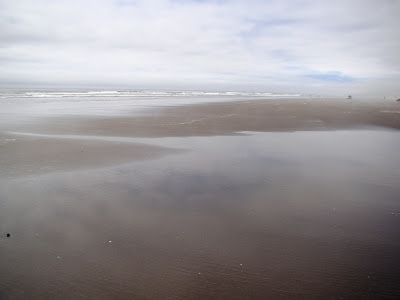 Wrapping up my mini-exploration of the coast of Oregon leads me to the plainest of all subjects: sand. Or maybe not the plainest. We use the grains of sand on the beaches of the world as some sort of analogy for infinity, suggesting that the diminutive grains are so common as to be hardly worth our notice. Sand is so uniform that it served as a time keeper (remember Dorothy and the witch in the castle...). Boring?
I was convinced otherwise a long time ago. What does it take? For one, a handlens or a microscope. Even the plainest looking sand can turn into a pirate's treasure when viewed up close. Garnet, peridot, and other gemstones can often be seen among the quartz grains, and a single grain can tell a complex story of erosion and deposition, of burial and lithification (turning to stone), and liberation once again by erosion. There is even an excellent geo-blog based on sand.

On the other, there is the big picture. Sand covers large parts of some deserts (although not as much as folks tend to think). And sand is a major component of our shoreline systems.

Traveling along the rocky shoreline of Oregon, I wasn't thinking much about sand, but that changed when I saw how much sand influenced the topography along the coast. It starts with the rivers: Oregon has a lot of rivers, in stark contrast to most of California, my home state. The rivers provide copious amounts of sediment to the coastal systems. In the first picture above, at Del Rey Beach, we were traveling across the vast beach formed by sediments from the Columbia River. Wide and flat. Featureless. But what happens when the wind picks up? And you can trust that the wind blows quite freely on the Pacific Northwest coast.

Some of the sand gets picked up and blown inland. That is when things start to get interesting... 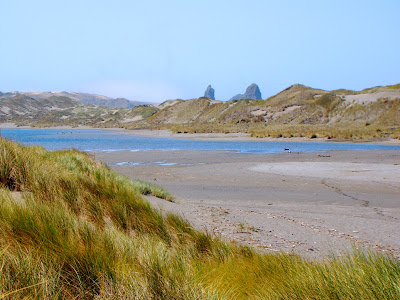 At Pistol River Beach, we can see how the sand piles up in dunes and moves inland. The dunes start altering the arrangement of rivers, deltas and estuaries. And then life gets involved, as grasses and shrubs start stabilizing the dune surfaces. 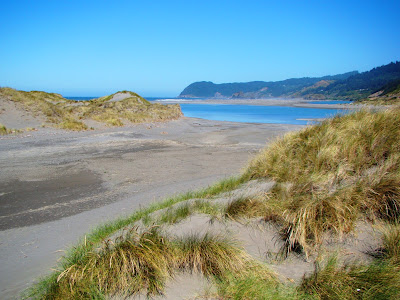 When the grasses and other pioneer species build up the organic content of the sand, trees can get a roothold, and forests start to grow. At times the active sections of the dunes can shift and forests get buried. There are a lot of complex interactions going on in this environment. 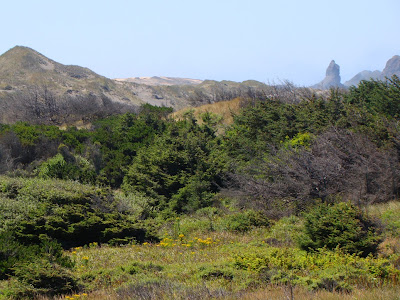 I have often thought of lakes as being the result of either glaciers, landslides, or human dam-building (and the occasional volcanic crater filling). I hadn't given much thought to the possibility of lakes forming around dunes, primarily because I spend most of my time in deserts where there isn't enough water. But there are lots of lakes in the dune fields of Oregon, especially around Florence and the Oregon Dunes. Many of the lakes are fed by groundwater, while others are connected by rivers and streams. 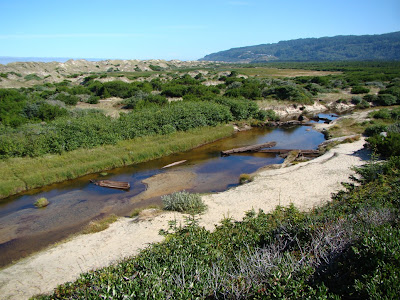 I didn't take many shots of any of the big lakes on this trip, but you can see from these shots at Sutton Creek how dunes can conceivably form dams. 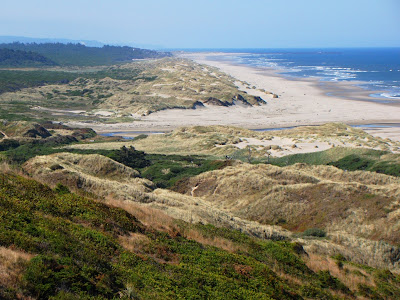