The Abandoned Lands...A Journey Through the Colorado Plateau: Migrations, Calderas, and the Middle of the Story at Bandelier 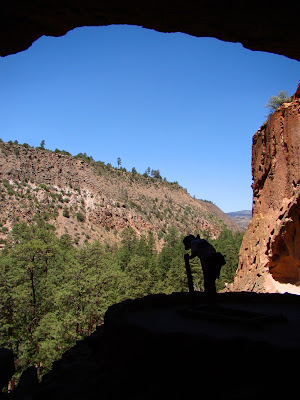 My ancestors migrated. My great-grandfather's family was struggling to survive in the hill country of Kentucky, and with eight hungry children it wasn't easy. In the early 1900s they heard of farmlands and jobs in the Indian Territories north of Texas, the land that would soon be known as Oklahoma. They arrived, and although life was still hard, the family thrived.

After a generation, things began to change. There were a series of drought years, and the Great Depression added to a hard existence. There were the horrific dust storms, and in 1936 a tornado destroyed my grandfather's house, nearly killing him. But they hung on. They found jobs here and there, and always kept up a vegetable garden in their spare hours. They canned food when they could, and sold fresh vegetables off their wagon in town.

World War II was well underway when the family made a momentous decision. Relatives in California said that things were better out there, and that they should move west. The family sold most of their things, loaded up their car, drove through New Mexico, and got as far as Kingman, Arizona before their transmission failed. The repairs took six days and nearly all their money, but they labored on, traveling at night through the Mojave Desert and arriving the next morning in the Central Valley. We're still here several generations later. 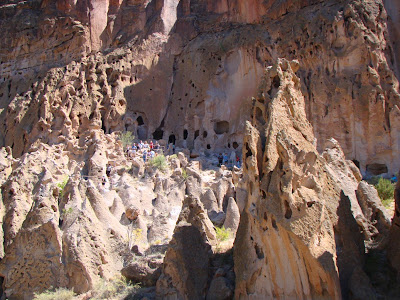 Reading about the journeys of the Ancestral Puebloans made me think of my own family history. How intolerable did things have to become to cause a person, a family or a village to give up and move on? Something happened on the Colorado Plateau that caused entire societies to abandon the region. Many of the displaced groups headed southeast, presumably because of stories of more secure water supplies along with relatively unpopulated but arable lands near the Rio Grande River.

I've been telling the story backwards. I've had a couple of posts about the pueblos at Acoma, Pecos and Taos where the Ancestral Puebloans ended up and are thriving today. Today's post is about the middle of their journey, a place that was a population center for several centuries, but which was ultimately abandoned as the inhabitants moved down into the Rio Grande Valley. It is Frijoles Creek on the flanks of the Jemez Caldera which is preserved as part of Bandelier National Monument.

Bandelier has one of the stranger geologic settings of any archaeological park. The walls of the canyon are full of holes, not unlike a giant chunk of swiss cheese. We had seen a place like this on the first morning of our trip, at Hole in the Wall in the Mojave Desert. It resulted from differential erosion of a thick layer of rhyolite tuff. Here at Bandelier, the origin is the same, only from rocks much younger. 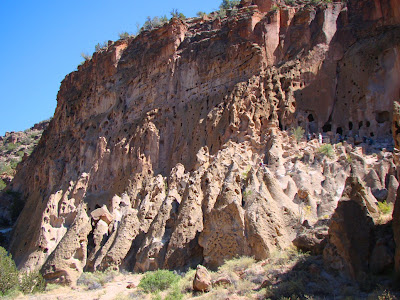 It was less than 1.2 million years ago that a vast eruption blanketed the region with a thick layer of hot ash, more than a hundred cubic miles worth. The source of this incredible explosion was a vent to the northwest. The erosion was so huge that the crust collapsed into a vast hole 12 miles across. The Jemez (or Valles) Caldera, as it is called, is one of the three active supervolcanoes in the United States. Yellowstone is the best known, with the California's Long Valley Caldera at Mammoth Lakes being the other. The ash at Bandelier is soft, but readily forms cliffs, so the inhabitants of Frijoles Canyon took the holes and enlarged many of them into rooms. Other rooms were built out from the cliffs, reinforced by logs embedded in the ash. 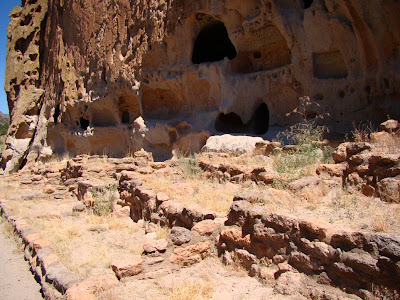 People have lived in Frijoles Canyon off and on for several thousand years, but the majority of the structures and villages were constructed after 1150 AD, when the Colorado Plateau was beginning to be depopulated. The villages at Bandelier were abandoned by the middle of the 1500s as the Puebloans moved closer to the Rio Grande River. Their descendants live on in the present-day pueblos. 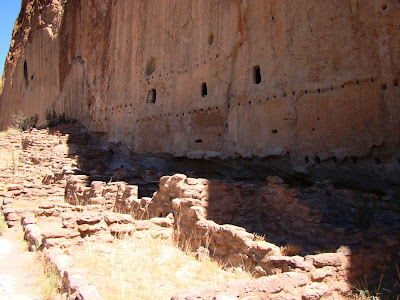 The canyon is a fascinating place to explore. The large village of Tyuonyi is easily accessed from the visitor center. A huge excavated kiva can be viewed next to the village. The most spectacular ruins are those which are scattered along the base of the cliffs for a long distance up the canyon. A trail winds up and through the ruins, and ladders provide access to some of the cavern openings. 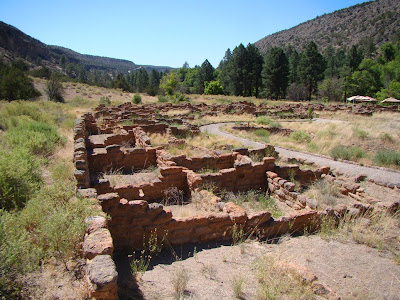 The trail provides a look at details of the rhyolite tuff as well. In shaded corners, plants have gained a roothold... 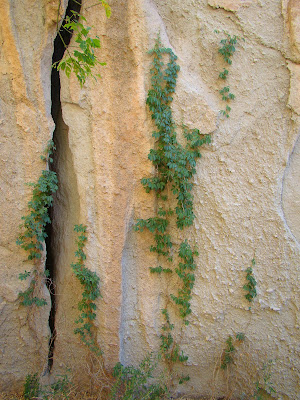 ...including this tree that I can barely believe was alive. 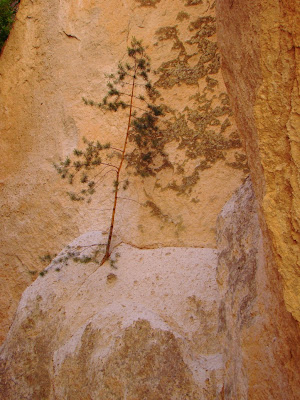 If you suffer from acrophobia, I will definitely not recommend the trail to the Alcove House (below). 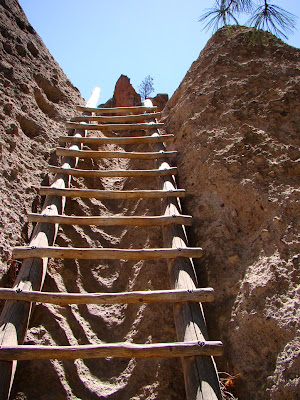 It is 140 feet above the canyon, and is reached by a series of ladders. If you don't mind the exposure, the payoff is pretty amazing. The Alcove House was a dwelling with 22 rooms and a kiva, which has been reconstructed. The alcove provides a marvelous view up the canyon (check out the first picture in this post). 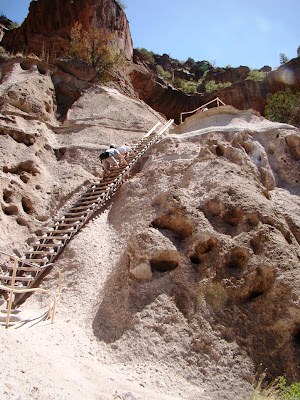 Bandelier was ravaged by two disastrous fires in 2000 and 2011. The most recent fire burned 60% of the park. Although the visitor center area did not burn, the area upstream did, and the slopes have lost the vegetation that would prevent flashfloods from developing. The floods have wreaked havoc on  the park, with trails and bridges being repeatedly washed out, while parking and picnic areas have been inundated. Private cars are currently being parked just outside the park and shuttles provide access. The park has a campground on the plateau above the canyon (including group sites). 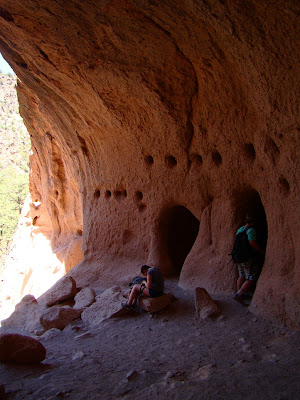 I've written about Bandelier a few times before when I was working on "Time Beyond Imagining". Check out this post, and this one.
Posted by Garry Hayes at 11:21 PM

Frijoles was definitely one of my fav places on this trip. Dr. Kerr said that it is probably where the San I's Ancients probably lived. No wonder why I liked it! :)

Thanks for sharing your family's history and journey to Central CA. Love hearing about family history.

An amazing place I've yet to visit.

I liked the story of how your family came west.