The Abandoned Lands...A Journey Through the Colorado Plateau: Surviving in the Great Rift 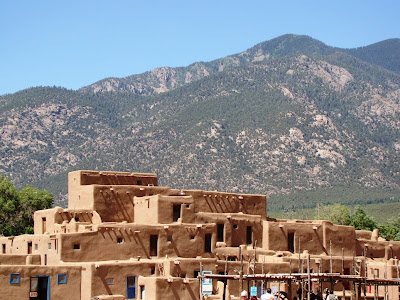 I've been doing this journey through the Abandoned Lands sort of backward...the places we've been exploring, like Acoma, and today's location in Taos aren't abandoned at all. And we aren't even on the Colorado Plateau at this point. We are actually traveling through the Rio Grande Rift, a giant tear in the crust of the Earth that extends from southern Colorado to Texas and Mexico.

It's backwards because what I have been calling the abandoned land, the Colorado Plateau, was deserted by the Ancestral Pueblo people in the 1200s. The pueblos we are visiting, like Acoma, Cochiti, and Taos, are the places to which the Ancestral Pueblans migrated, and still live today. So we're telling the end of the story before the beginning and the middle. But we will be back on the Colorado Plateau soon enough, and sometimes it helps to know how the story ends before we deal with the beginning. It helps us to understand why things are the way they are today.

Taos Pueblo is one of the single most photographed buildings in North America. Along with Acoma and Old Oraibi, it is among the oldest continuously inhabited villages in the country. It has a spectacular setting, tucked on a high plain between the Sangre de Cristo Mountains and the Rio Grande River. It's not on the Rio Grande River, like most of the other New Mexican pueblos. It's not hard to see why... 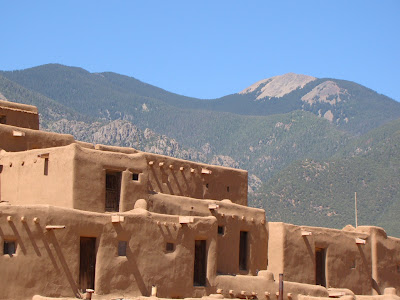 The process of forming a rift valley involves tens of thousands of feet of faulting and thinning of the crust. The release of pressure on the underlying mantle allows partial melting and the formation of basaltic lavas that can follow the fault lines to the surface, forming voluminous lava flows. In the vicinity of Taos, the lavas blocked the Rio Grande, but rivers aren't intimidated by lava flows; they cut right through. The Rio Grande Gorge near Taos is no place for a village. There isn't enough flat land for building or growing. 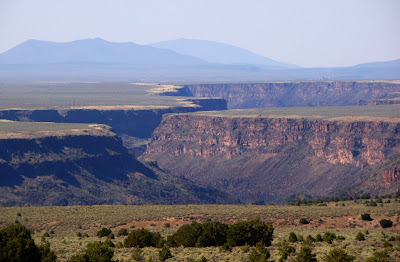 So Taos Pueblo was built at the foot of the Sangre de Cristo Mountains, the southern extension of the Rocky Mountains. A creek flows from Blue Lake, high on the slopes of Wheeler Peak, and flows down into the Rio Grande. Called the Rio Pueblo de Taos or Red Willow Creek, it provided dependable water for the village. That's it in the picture below. The lake and the creek are sacred to the people of Taos Pueblo.

One of the most emblematic battles that ever took place at Taos Pueblo involved the federal government, but didn't involve guns and bows. Instead, it involved lawyers and senators. The creation story of the Taos people points to Blue Lake as their place of origin. It was part of their history and spiritual journey. But in 1906 the federal government took over administration of the lake, adding it to Carson National Forest. The people of Taos expected to have access to their sacred lands, but the forest service had different ideas, opening the region to "multiple-use": ranching, mining and recreation. The pueblo began a campaign to get their lands back. It took a shamefully long time, but in 1970 President Nixon signed legislation returning Blue Lake to the Taos Pueblo. 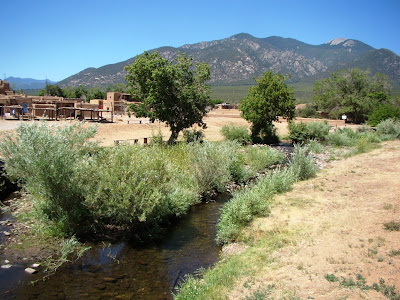 Things were not always peaceful in the pueblo at Taos. One of the clues is the San Geronimo mission church which is probably the second most photographed building in the country. It was built all the way back in...1850. 1850? That's not so long ago in a town with a 900 year history.

Pecos Pueblo, the subject of our last post, was at a geographical choke-point, and as such was directly involved in wars and battles for much of their existence. The ongoing conflicts took their toll and in 1838 Pecos was abandoned. Taos was farther to the north and could pick and choose their battles. They were major players in the 1680 Pueblo Revolt, and resisted the return of the Spaniards twelve years later. Things were apparently mostly peaceful for the next century or so, but things changed with the Mexican-American War in 1846. The United States laid claim to New Mexico, and the Taos Pueblo resisted the new government, along with Mexican nationals living in nearby Taos. 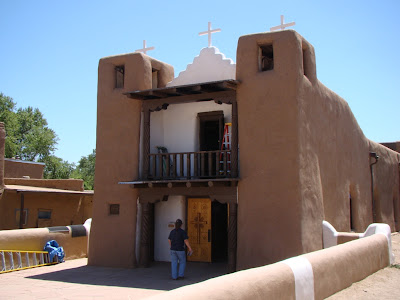 The battle did not go well for the defenders, and in the end a large number of them took refuge in the San Geronimo mission church behind a heavy wood door and thick adobe walls. The U.S. forces tried axes on the door and failed, so they rolled in a cannon. In a few hours the battle was over and around 150 people were dead. The ruins of the church still stand (below), surrounded by the Pueblo cemetery. The new San Geronimo church was built in a new location. 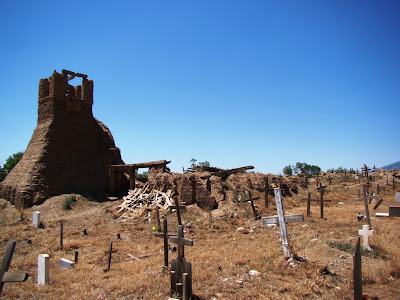 The Taos Pueblo is among the most conservative of the New Mexico pueblos, and around 150 people follow the traditional ways, living in the old village with no running water or electricity. It is a fascinating place to visit﻿
Posted by Garry Hayes at 5:00 PM

This is a wonderful post with superb photos, Garry. I've already gone out onto several maps etc. to see more clearly what's where around the area. In another lifetime, maybe I'll be a geologist! Thanks so much - I'm waiting for more fascinating posts.

Garry - I really think you and Susan should do a tag team MAPS lecture. It would promote the Summer Field Studies and let others see how Anthro and geology go well together. Thanks for posting the trip...allows me to focus on the places we visited and not driving. Great class-awesome memories.