The Right Place at the Wrong Time: A January Day at Tioga Pass 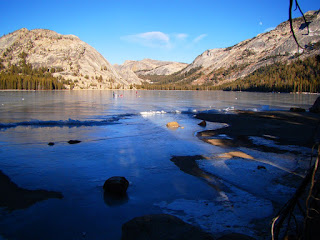 If anyone had told me anytime in all the years that I have lived here in Central California that I would be where I was today, I would not have believed them. It just doesn't happen. Tioga Pass in Yosemite National Park always closes in November or early December. Always (ok, in 2000 it was open for one day in January). Everyone in the Sierra knows that the pass closes and no one gets to go up there except for the hardy cross-country skiers until May or June. But that's the kind of year we are having here in California; water managers should be terrified. The snowpack is at 15% of normal, and after today, I'm saying "What snowpack?"

So off we went today, to see what we could see. There have been few storms yet this year or last, but it is plenty cold. Cold enough that Tenaya Lake and all the other high country lakes and ponds are completely frozen over. If you click on the photo above, you'll see ice-skaters out on the lake. It is a strange sight to see; frozen lakes, but no snow to speak of on the surrounding peaks. 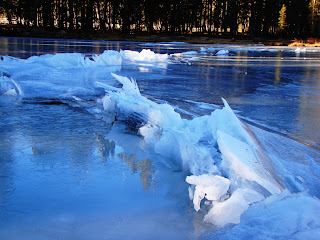 Being a Californian born and bred, I admit to not knowing much about the dynamics of lakes freezing over, but I am pretty sure that these are pressure ridges caused by expansion of the surface of the lake as it freezes. It was a fascinating thing to see. 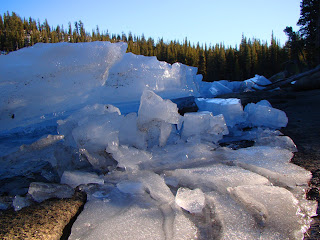 Oddly enough, the temperatures were in the forties and fifties, and I wore a short-sleeved shirt all day. We drove past Tenaya Lake and made our way to Tuolumne Meadows. Again, there was ice everywhere, but no snow other than scattered patches in the forest. The moon rose over Cathedral Peak (or is that Unicorn?) 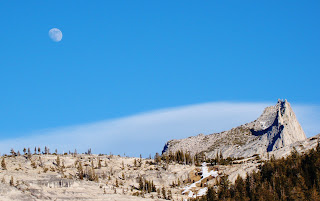 Tuolumne Meadows was pretty as always, maybe even more so. I was happy to be able to visit in January, an absolutely new experience for me. I just worry about what this means for our water supply this year. These are Texas kinds of numbers, drought-wise, and no storms are in the long-term forecast. 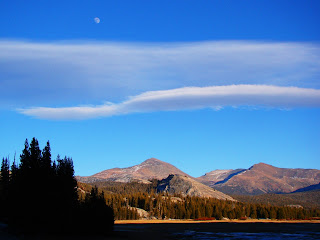 We stopped at the top of Tioga Pass. On January 5. It was beautiful. And weird. Standing at 10,000 feet in the dead of winter and not dying of hypothermia. The last time my ancestors did something like this, very bad things happened (hint: my ancestors included the Donner family...look it up if you don't know the story). 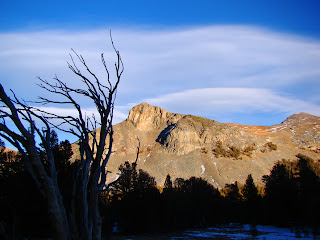 Heck, we came this far, why not cross the Sierra? We headed a few miles down the road towards Lee Vining. We were tempted to hit the Whoa Nellie Deli for dinner, but we realized that an incredible sunset might be developing. We turned around and headed back towards Tioga Pass, but not before snapping a picture of Ellery Lake (also completely frozen over). 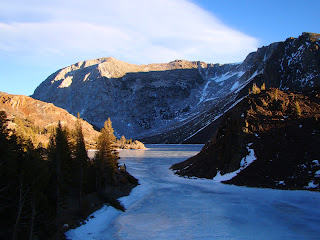 We stopped to walk on the Dana Fork of the Tuolumne River (below). The silence of the frozen landscape was eerie. No water was flowing anywhere. 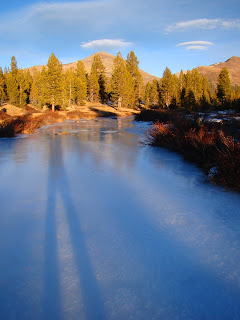 A lenticular cloud formed over the Sierra Crest. Or was it a UFO? 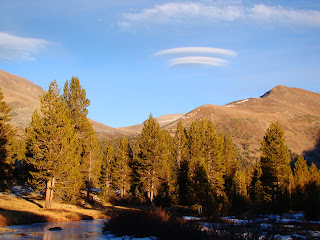 One more oddity. We did have an unusual storm earlier this year. It involved no rain or snow, but it did include hurricane force winds. Driving down from Tioga Pass I noticed hundreds of Lodgepole Pines that had been literally ripped from the ground. They were all pointing west. Again, an eerie day. 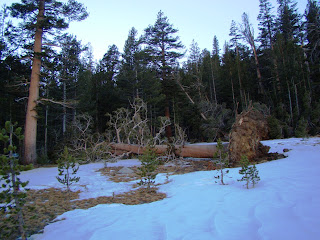 We headed back to Tenaya Lake and Olmsted Point to see how sunsets differ when the sun is setting far to the south of where it sets in summer or fall. Look for it in my next post.
Posted by Garry Hayes at 11:19 PM

It's very surreal to be witnessing such a dry winter in the Sierra, especially from so far away. I would love to be there now!

Yes, that is Cathedral peak, with Eichorn pinnacle. It really should be renamed Unicorn, but there's another peak with that name just east it it.

Great post--I was wondering about the science behind the frozen lake--when I stood by the lake in the morning, it was like listening to whale song with the ice shifting. Cool photos of lenticular clouds as well over Dana and Gibbs.

Nice photos, and yes, it most certainly does feel weird to be driving on a dry road up high in such low angle midday light. I think almost everyone who lives close enough to do so has taken the opportunity, just because they can't imagine what it feels like without actually experiencing it.

BTW, Whoa Nellie Deli closes Oct 31 each year, so you didn't miss that.