The Other California: For a time it was the Black Golden State

We drill into the earth to find oil.

It is a measure of our dependence that we also fight wars over it, support vile dictators, and drill for it in the harshest conditions on the planet: in arctic tundra, in isolated deserts, and deep ocean basins. We end up dealing with huge environmental consequences as we attempt to clean up our spills and as our planet warms up at an unprecedented rate.

I can see where it once made perfect sense to go all in with oil and gas. No one knew of global warming and greenhouse gases, and in some areas the oil seemed practically as plentiful as water. It made sense when it was cheap and easy to get.  But now it is different. Oil is expensive, but it is so completely integrated into our economy that we can't easily wean ourselves from it.

California was once one of those places where the oil seemed to flow like water. The freeway economy and near total lack of public transit in the southern California metropolitan area was a consequence of the vast amount of oil that was once drilled in the Los Angeles basin. Fuel was easy to get and cheap to purchase.
Things have changed in a radical way. California produced 230 million barrels of oil in 2009, fourth in the country after Texas, Louisiana and Alaska. But oil drilling in the state is in a long-term decline; the last time our state produced oil at a level this low was in 1941. But the state uses something on the order of 700 million barrels of oil each year. Nearly two thirds of our oil has to come from somewhere else. 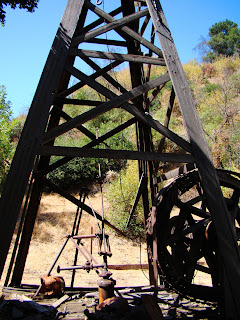 I didn't know a lot about the story of California oil, but a possible opportunity to lead a field trip with foreign oil geologists popped up last summer. I hit the road (and the books) and found myself in the Santa Clarita Valley discovering the site of the state's first gold rush, and some of the oldest rocks. I also stumbled across a historic oil well. Not only was it the first commercially successful oil well in California, it was also the longest continually operating oil well in the world, pumping oil from 1876 to 1989 (a similar claim is made about a well in Pennsylvania, though). It was Pico No. 4.
Pico No. 4 was not the first attempt at oil drilling in the state. The remote village of Petrolia in northern California was the site of a drilling attempt in 1861, but the oil was very quickly depleted. Other attempts were made in the 1860s, but none were successful until Charles Mentry started drilling a series of wells in Pico Canyon. The fourth well proved successful, and the production began. The town of Mentryville popped up in the lower part of the valley. The oil drilling took a toll. When production started to fall, wells were abandoned, villages turned into ghost towns, and equipment littered the canyon. Eventually Chevron pulled out of the region entirely, but they clearly made an effort to clean up some of the worst of the damage, and turned the land over to the Santa Monica Mountains Conservancy. Pico Canyon is now a parkland, and it is a surprisingly pleasant place to visit, given the checkered history of our abuse of the landscape. There is a modest fee for parking at Mentryville, and the "trail" leads up the canyon through the chaparral covered slopes and riparian woodland. Although the road is paved for a mile or so, the gates are locked, so you will see bikers, joggers and hikers, not cars. 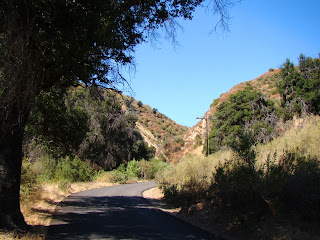 The slopes are made of sedimentary rocks that formed in Pliocene time, mostly within the last 5 million years in a shallow marine environment. The exposed formations include the Pico Formation and the Towsley Formation. The rocks are steeply tilted, but at the head of canyon they fold over, forming an anticline that served as the oil trap. Around eighty wells were once present in the upper canyon. 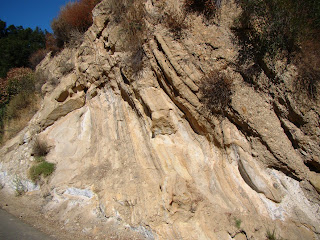 It was an enjoyable stroll, even though the late August day was pretty hot. It was nice to find some occasional trees shading the road. 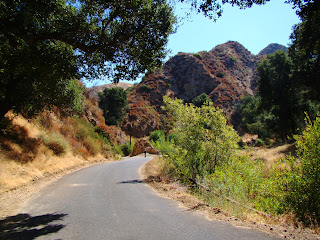 I found myself wondering how many wildflowers can be seen during the spring. It must be quite a show! 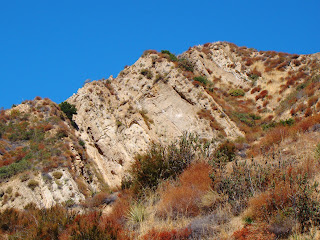 My time was limited, so I turned back at the end of the pavement. Trails continue beyond into adjacent canyons allowing for a number of choices in hiking destinations. 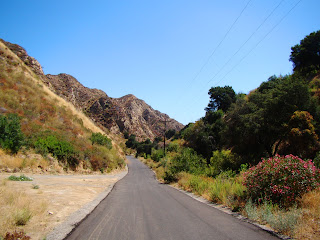 We wandered back down to Mentryville and looked at some of the buildings, and then headed back out to the highway.
The thought that occurred to me as I walked back down the canyon is that given enough of it, time does heal some wounds.
Posted by Garry Hayes at 1:18 AM

Earth IS capable of healing once we leave it alone.

So right about oil having run its course. Time for something different.