Uranium Mining in the Grand Canyon? Perish the thought (well, except...) 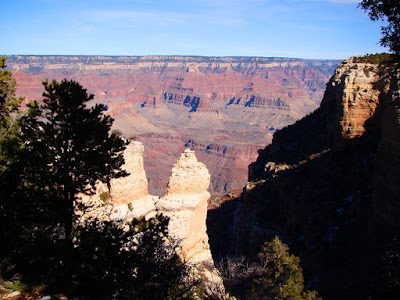 Having just returned from the Grand Canyon, I noticed with interest that the Obama administration is announcing the continuation of a moratorium on uranium mining on lands adjacent to Grand Canyon National Park. It's a contentious issue, the idea of mining uranium in one of the crown jewels of our national park system. I mean, really, can you imagine uranium mining at the Grand Canyon??
It's not too hard to imagine, actually. It was going on right there on the South Rim, less than two miles from the El Tovar Hotel for more than a decade, from 1956 to 1969. And the Orphan Mine was no small effort, either. A vertical shaft 1,600 feet deep, a 1,200 foot drift, and an 80 foot headframe perched right on the rim of the canyon. It produced 4.2 million pounds of triuranium octoxide (and 6.7 million pounds of copper). I remember reading somewhere that mineworkers finished work and sat at the restaurants on the rim in their dusty work cloths. The chili must have been extra hot. Even glowing.... 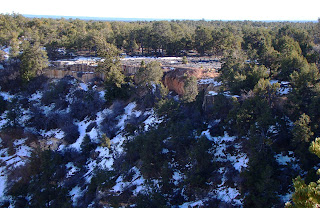 The headframe was still there only a couple of years ago, but most signs of mining are beginning to disappear as the park service starts to mitigate the property. They still have a real problem with ambient radiation levels, and the park's rim trail diverts around the mine site. It's going to take awhile to clean up. They're being quite open about the process; there are interpretive signs along the trail to Powell Point that explain the situation in detail. 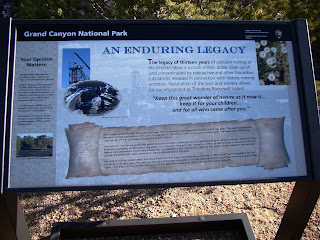 The ores occurred in a unique geological environment: breccia pipes. Limestone is soluble in slightly acidic water, and whenever dissolution occurs, caverns form. When the caves get big enough, the ceiling may collapse. This will cause the formation of sinkholes in places where the limestone is close to the surface. At the Grand Canyon the Redwall Limestone is several thousand feet below the rim. When the collapse occurs, it leads to the collapse of the many layers above, and the breccia pipe is produced.

The breccia pipes provide a conduit for groundwater movement and mineralized solutions produce the uranium and copper ores. The breccia pipes are a sort of novel source of ores, and there are thousands of them on the Colorado Plateau, thus the interest in developing these resources near the Grand Canyon.
It was a breccia pipe at Grand Canyon that had a lot to do with my becoming a geologist. My first geology field trip was a five day backpack down the New Hance Trail at Grand Canyon back in the ancient days of 1976. We climbed up out of the river to Horseshoe Mesa, where we explored the interior of the Last Chance Mine (what was it with these names? Orphan? Last Chance?). The mine was also developed in a breccia pipe. We walked (or more properly 'crawled') up a trail that was designed to move burros carrying ore to the rim, not heavily laden backpackers. It was a fascinating introduction to the most dynamic of sciences! 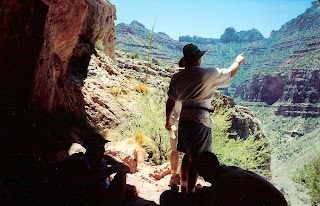 Mining is not evil in and of itself. We have a civilization that has chosen for better or worse to consume vast amounts of natural resources, and they have to come from somewhere. It's clear that we need to use less, but there will always be a need for metals and other materials. Mining (and recycling) has to happen. But we still have choices as a society about where that mining should take place. Monetary gain cannot be the sole deciding factor.
Here's the thing: So many times the national interest is the justification given by those who want to mine or log or whatever. But when the price of the commodity drops, the companies are out of there for good. How important is it to mine coal within sight of Bryce Canyon National Park, or to mine uranium on the boundaries of Grand Canyon National Park? Is it important enough that companies will do it on a non-profit basis to support their country? It's kind of like the question I keep asking about our involvement in wars of choice: are those wars important enough that the legislators who support them would put their own children on the front lines? That is how we should feel about our national parks as far as I am concerned.﻿
Posted by Garry Hayes at 8:48 PM

Thanks much for the information on the Grand. Canyon mining. I learned a new term.

"Mining is not evil in and of itself. We have a civilization that has chosen for better or worse to consume vast amounts of natural resources, and they have to come from somewhere. It's clear that we need to use less, but there will always be a need for metals and other materials. Mining (and recycling) has to happen. But we still have choices as a society about where that mining should take place. Monetary gain cannot be the sole deciding factor."

Hear, hear. Couldn't have said it better myself :)

I was searching for evidence that Uranium ore is not very dangerous. But I came across your comment about "wars-of-choice" and wanted to let you know that public objection to such wars is noble and patriotic. Since we have such a strong defensive capability, it is somewhat obscene to use it offensively and for doubtful reasons.

As a former tour guide at the Canyon I thought this was a well balanced and insightful article.
I feel it is a shame, though, that they removed the headframe as this would have been of historic interest to the guests visiting.