Vagabonding Across the 39th Parallel: Hoodoo Homily, A Land of Glowing Rocks 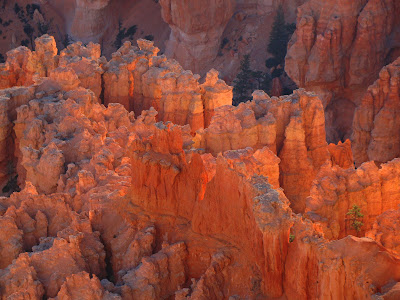 It's the third Hoodoo Homily (and now that I'm here there will be a fourth, probably). We had reached the two week point of our vagabonding journey across the geology of California, Nevada, Utah and Colorado last July more or less along the 39th parallel of latitude (at this point it was less, more like the 38th). We had experienced the late afternoon in the southern part of Bryce Canyon, an interesting sunset at Fairyland View, and a loud night at the campground (I suspect a geology field class was camped near by). We awoke early in the morning and headed to the some of the park's most famous and busy view points...an hour or so ahead of the tourist buses and car traffic. 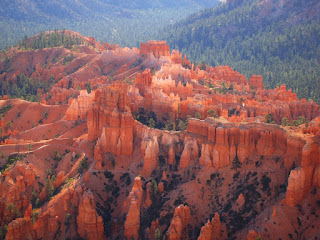 The Claron Formation, the sedimentary layer responsible for the cliffs and hoodoos of Bryce Canyon, was laid down in freshwater lakes during early Cenozoic time. Iron in the sediments has oxidized into the vivid orange, pink, and red colors that make Bryce Canyon so memorable. When the sun is at a low angle, the rocks seem to glow from within. That makes mornings an especially intense time to be exploring the park. 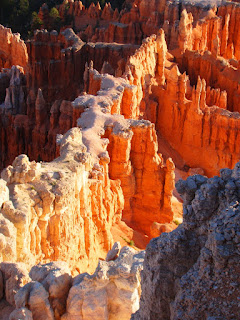 And the parking lots were empty! I reveled in the silence... 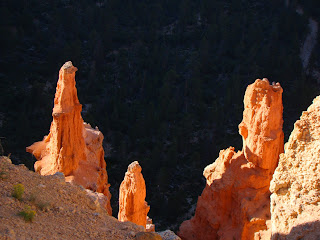 Paria View offered some isolated hoodoos set against the dark forest below in the shadows. 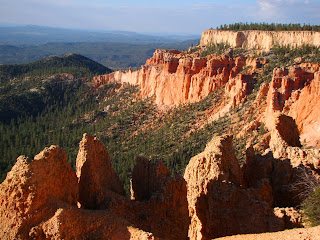 We moved over to Bryce Point. There were two cars when we pulled up to one of the busier parking lots in the park. 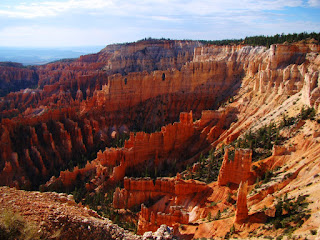 The minutes were slipping away, but we saw one more chance for a serene view. We parked at Inspiration Point, and I worked my way up the steep hill to the viewpoint. It offers views into one of the most intricate and complicated of the amphitheaters. I had the point to myself, and I loved every moment. 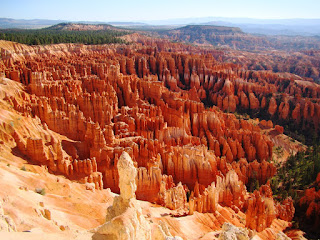 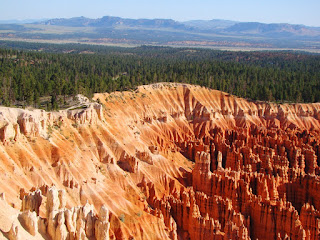 I could hear the rumble of the buses in parking lot down below. More and more people were starting to wander up the trail. Things were returning to summer normal. It was time for us to move on. 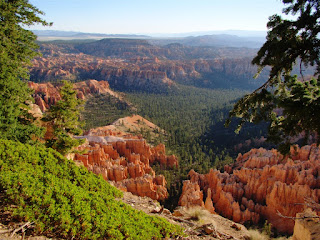 Such gorgeous sights!.. Thanx for the virtual travel; hoping to get there myself one day!

Mike was working there in November and said the place was deserted.