Vagabonding across the 39th (er, 38th) Parallel: A Hoodoo Homily in Three Parts 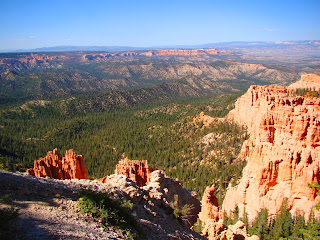 For more than two weeks last July we were vagabonds exploring the geology along a route that was mostly near the 39th parallel through Nevada, Utah and Colorado (our last junction choice had landed us south of the 38th). We rarely planned our route more than a day or two in advance, and we made an informal rule that we would make every effort to see something new every day, and if we were in a familiar place, we would try and see it in a new way. And that's what brought us to Bryce Canyon National Park. 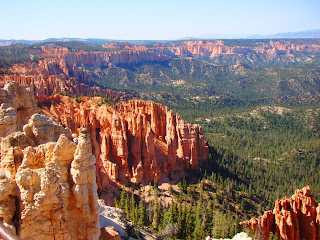 Bryce Canyon, you say? Haven't we been there many times? Well, yes, but almost always with a big bunch of students and a highly restricted schedule. We've usually had time for the visitor center, one or two viewpoints, and one quick hike below the rim. It's ok under the circumstances, but I have not had many chances to explore the park more fully. On this trip, we spent a night and spent as much time on the rim as we could. Three parts? The less-crowded south end, a sunset at the north end, and a deserted morning in the most heavily trafficked part of the park. For many hours in the midst of July we had the park to ourselves. 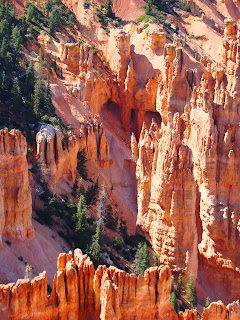 We headed out during the afternoon to the southernmost viewpoints in the park, Yovimpa and Rainbow Points. The long ridge of the Paunsaugant Plateau ends at this point at an elevation of more than 9,000 feet. The two viewpoints have sweeping views of the Grand Staircase off to the south, and north towards the rest of the park and the Aquarius Plateau beyond. I was mostly entranced by the sunlight on the orange and white towers (which are called hoodoos). 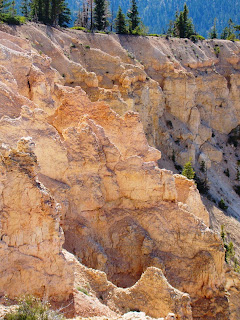 When you arrive at Bryce Canyon National Park, you have reached some of the youngest sedimentary rocks on the Colorado Plateau. Below the rim, the rocks are gray shales and sandstones of the Mesa Verde Group, and date from the end of the Cretaceous Period, the last stand of the dinosaurs. The pink and orange rocks of the rim of Bryce Canyon belong to the early Cenozoic Era. The lime-rich shale is called the Claron Formation, and it originated in a vast freshwater lake complex. 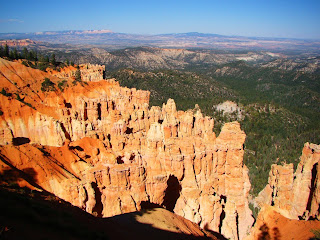 We moved on to Agua Canyon for a new perspective... 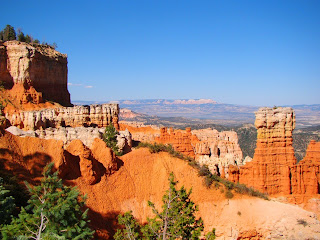 I'll bet that the single hoodoo in the image below has a name, but I don't know it. I know I've seen it in a lot of books. Someone fill us in! 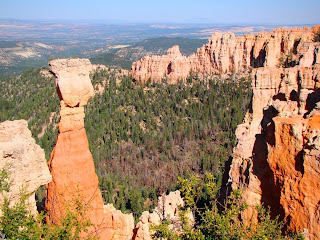 A bit further along the road, we found Natural Bridge. Given that a bridge is supposed to have been formed by a river, this should actually be called an arch. It is one of the most striking features we ran across. 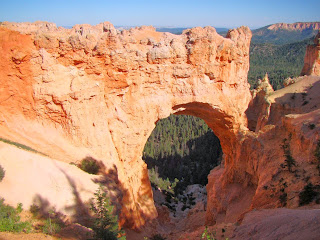 A pair of ravens were having an argument in a nearby Ponderosa tree... 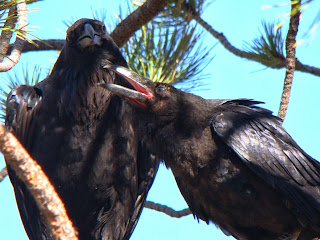 Somehow that reminded us that it was dinner time, so we went to camp and whipped something in a can. We wanted to check out the sunset at Fairyland Point...that will be covered in part two...
Posted by Garry Hayes at 11:50 PM

The hoodoos are magical. The big one is Thor's Hammer.

Of course! I did know that somewhere in the deep recesses of my mind, and I just couldn't recall it. Thanks!

Judging by the pinkish coloration of the inside mouth, at least one of those ravens is a juvenile. Possibly badgering a parent for a snack?

The ravens at the Bryce lookouts are infamous for their boldness, and will grab anything that looks edible if you don't watch it.

We are pretty sure it was a juvenile. It was definitely begging, just like a kid in a toy store!