The Other California: The Oldest Rocks (well, maybe...) 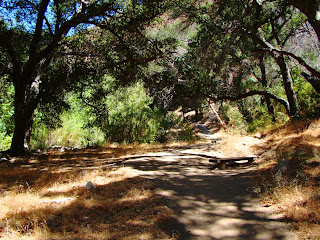 Part of the mystery question I asked the other day suggested that the oldest rocks in California lie within a few miles of the Santa Clarita Valley. I kind of knew I would be opening a can of worms by pointing this out, and I will try to explain why this idea might be ambiguous at best, and highly controversial at worst. In essence, yes, some of the oldest rocks found in the state are found there, but defining how 'old' a rock is can be a real conceptual problem at times. 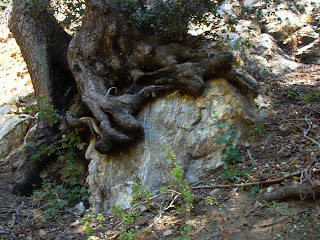 It wouldn't be that much of a problem if the rocks in question were volcanic or plutonic. Such rocks are usually ideal candidates for radioactive age dating. The rocks form by cooling from hot magma, and crystallization is either instantaneous (in the case of volcanic rocks), or takes place over several thousand years (as in plutonic rocks cooling deep underground). As the rocks crystallize, they trap small amounts of uranium, rubidium and other radioactive elements in a solid atomic prison. Isolated from weathering and other chemical changes, the radioactive substances start to decay at extremely regular rates, and the original material begins a very slow transformation to daughter elements like lead and strontium, or argon (in the case of radioactive potassium). By analyzing the proportion of daughter element to parent element, the age of the rock can be precisely determined. Because several methods can be used to date a single sample, results can be cross-checked for accuracy

A side note: Carbon dating is another form of radioactive age dating that is recognized by many people, if not well understood. It is rarely used in geology because it only useful in materials that are less than 100,000 years old. Since it is carbon-based materials like bone or wood that can be dated, the method is favored by archaeologists who are working with artifacts. 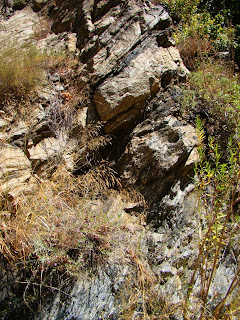 The problem comes when such rocks undergo metamorphism, that is, when they are changed by heat and pressure into new kinds of rock like gneiss, schist and marble. The heating in essence allows daughter elements to migrate out of the crystals and the radioactive 'clock' is reset to zero. If you age date metamorphic rocks, your results tell you when the rock was metamorphosed, not when the rock originally formed. This kind of information is critical to understanding the tectonic history of a region, but it isn't the age of the "oldest rock". 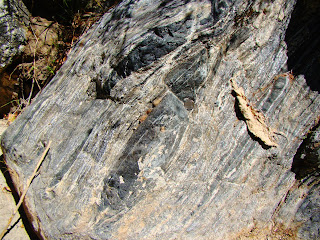 There is an additional complication. There are a few minerals that are not affected by the heat of metamorphism, including a mineral called zircon. When zircon crystals are present in a rock undergoing metamorphism, their 'clock' is not reset. So depending on which minerals are dated, you get the age of the metamorphism, or the age of the older zircon crystals. It gets even more tricky: zircon is also tough enough to survive erosional processes. So even though you can figure out the age of crystallization, the date you get may have come from the original plutonic rock, but it tells you little about how many cycles of uplift and erosion that the zircon may have gone through.

So there you go...it turns out that the "oldest rocks" in California can be found over a rather wide area. There are rocks that date to 1.7 or 1.8 billion years ago in Death Valley National Park, in the eastern Mojave Desert, in Joshua Tree National Park, and the San Gabriel Mountains, which form the eastern edge of the Santa Clarita Valley. Most of the rocks were part of a vast mountain system that developed in a series of terrane collisions as the supercontinent that we call Rodinia came together (here is an excellent overview if you want the gory details of the story). As I walked through Placerita Canyon, I was very close to exposures of the Mendenhall gneiss, which is dated, like the others, at 1.8 billion years. 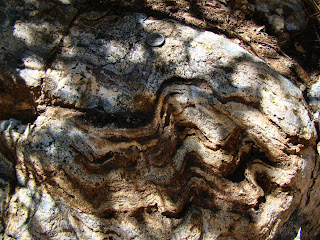 Before calling this oldest rocks "contest" a tie, we should point out that the ancient rocks in the Basin and Range and Mojave Desert are part of a Proterozoic terrane called Mojavia, which has zircon dates that extend back to 2.5 to 2.7 billion years, and as far as I know such results have not been found in the San Gabriel Mountains terrane (but as always, I am welcome to correction!). 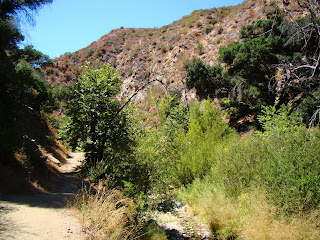 I wandered through the terrain around Placerita Canyon taking a look at some of the metamorphic and plutonic rocks of the San Gabriel Terrane (yes, terrain and terrane mean two different things; the first referring to the shape of the surface of the land and the other to the underlying crust). I haven't lived in Southern California for nearly a quarter century, but I immediately felt at home. The dry chaparral slopes and the oak and sycamore filled canyons were the places that I grew up in, poison oak and all. If trails weren't present, access was problematic. I had a number of memorable trips where I was climbing slopes using the bushes as a ladder. The San Gabriel Mountains are statistically the steepest mountain range in the world and I find that easy to accept. It is a wonderful place to explore.

One really big change, though: in the 1970s, when I was a budding geologist, the rocks of the San Gabriel Mountainswere mapped as "metamorphic-undivided" and were poorly known. Today there is a richness of data that allows us to see the role of the rocks in reconstructing the American West of nearly 2 billion years ago.

The Other California is my continuing series highlighting the geology of the fascinating places in my fair state that don't often show up on the postcards that tourists buy. The state is a big place and I have yet to see it all, so if you have a favorite corner of the state and would like to put together a blog entry, I would gladly add it to the series.
Posted by Garry Hayes at 7:38 PM

Yet the relatively uneroded flanks suggest the start of the continuing thrust uplift is recent. I haven't found a hard date for that. Do you have one? Thanks! (love your blog posts...)

The mountains are very young, having risen rapidly within the last couple of million years. It's a case of very old rocks in very young mountains.