Vagabonding Across the 39th Parallel: A Heavenly Canyon of Sand - Mukuntuweap 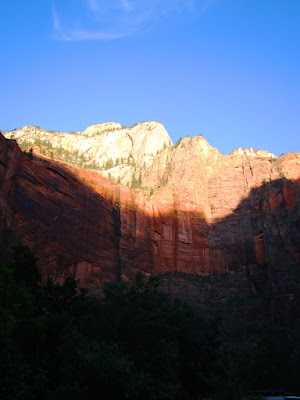 We'd been on the road for more than two weeks last July, on our vagabonding journey across the 39th parallel in Nevada, Colorado and Utah, and we could feel home calling. We had been going along, rarely making plans more than a day or two in advance, and we had explored many new and fascinating places that we had never seen before. And yet...we were sort of planning to cross the Wasatch Front in Utah and start across the Basin and Range province, but I took one last look at the computer, and noted that a cancellation had opened up a single campsite that day at Zion National Park. What the heck, I thought, let's take in one more national park. We headed south and west from Bryce Canyon and Red Canyon. 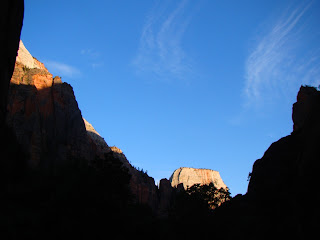 It was hot. Around 107 degrees. Sitting around in camp in the sun was an untenable proposition, so we erected the tent, and set about finding a cool place to hang out for awhile. In the main part of Zion National Park, that pretty much means upstream, in the Narrows.

The original name of the park appears to have been Mukuntuweap, which translates into something along the lines of "straight canyon" in the Paiute language. In the main part of the canyon where the roads and developments are found, the description is true. At the north end, things change. The walls of Zion Canyon are steep cliffs of Navajo Sandstone, the Jurassic record of a vast sand sea that once existed across several southwestern states. Where the Virgin River has cut into the underlying softer layers the canyon walls are undercut and the canyon widens rapidly (in the sense of geologic time, but also human time; rockfalls happen constantly). At the upstream end of the valley the Virgin River cuts exclusively through the sandstone, forming a very narrow winding slickrock canyon called, quite logically, the Narrows of the Virgin River.
On the hottest days, the sun barely shines into the narrows, and it is the coolest place to hide from the heat. We retreated into the shadows and waited for the sun to set. Others were hanging out in the coolness including a cute doe and fawn. 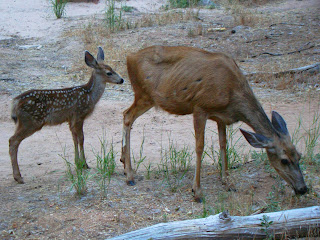 Canyons like the Narrows of the Virgin River are spectacular to see, but can sometimes be exceedingly dangerous. There are miles of river watershed upstream, and when deep in the canyon, you can't see if thunderstorms are dumping water into the gorges upstream. In the case of a flash flood there is no place to go. Things were calm the day we were there, but we could see huge masses of driftwood from some intense flooding from just over a year ago. 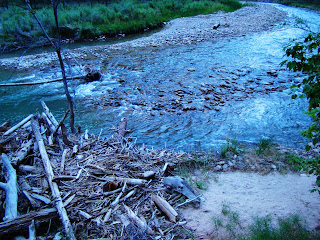 As we approached the actual narrows, the canyon walls closed in, rising as much as 2,000 feet above us. 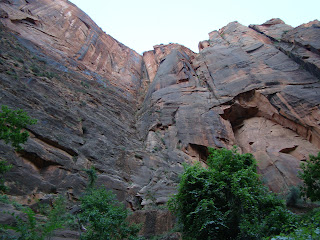 The shale layer underlying the sandstone is a barrier to the movement of groundwater, so water percolating downward through the Navajo Sandstone is forced out of the canyon walls, forming clear fresh springs. There is enough water in this section of the canyon to form a small swamp, an island of greenery beneath the red cliffs. 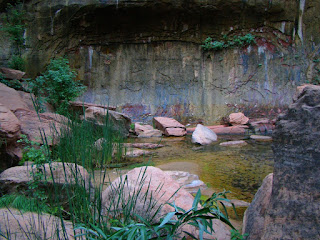 The sun was dropping below the horizon and the shadows in the canyon deepened. It used to be that the road end at Temple of Sinawava was one of the busiest parking lots in Zion, but with only a few dozen slots, cars would circle for a long time waiting for something to open up. It was crowded and noisy. The park service eventually instituted a shuttle bus system and no longer allows cars in the upper canyon, at least during the summer. Having experienced the canyon both ways, I can say that the shuttle system has done wonderful things for the canyon. The shuttle stops at road's end, people pile out and immediately disappear. By the time the bus leaves, the canyon is quiet again. More and more animals can be seen, and the canyon feels wilder, even though the number of visitors each year has been fairly constant.

The only problem is the that the shuttles stop operating at nightfall. Lingering in the upper canyon as we were doing introduced the potential problem of missing the last bus of the day. We started walking a little faster in the rapidly disappearing light. 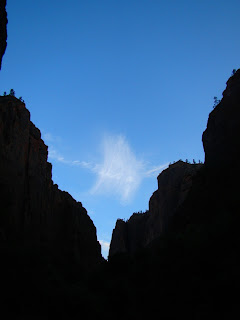 I fully support the shuttle system, but one drawback from my point of view is that the lack of access in the upper canyon at night makes it very difficult to do one of my favorite summertime activities: night hiking. The spot in Zion for night-hikes was the Emerald Pools Trail. It was a truly mystical experience to walk up to the pools in the dark and stroll behind the small waterfalls. It was especially striking if the moon was shining through the falling water, or if lightning was causing explosions of light and echoing thunder (followed that particular time by a complete drenching of rain).

There were a few hazards, though. One year we were sitting behind the waterfalls, and a two or three foot wide slab of rock broke loose and fell just a few feet from some of my students. Another time I was walking in near total darkness, enjoying my other senses (it was a concrete pathway so it was hard to get off the trail). I was walking through the high brush and I heard rustling, not at my feet, but right in front of my face. OK, that was a bit much. I turned on my flashlight and found that I had almost walked face-first into a porcupine munching away at the shrubs... 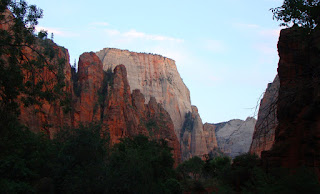 The canyon walls had taken on the pastel hues of the twilight. We caught one of the last buses of the day, and returned to camp, which aside from the ants was a much more tolerable place to hang out for the night. 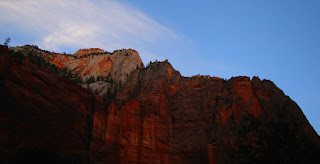 It got past me, but January 7 was my fourth anniversary of blogging here at Geotripper. 943 posts and counting. Here is the first one...
Posted by Garry Hayes at 9:31 PM

Congratulations on your 4th blogging anniversary!! Please, keep up with the great job! It is an amazing way for people like me, thousands of miles away, to stay in touch with the magnificient geology and nature you have in the States. And, as an amateur geology fan, a great way of constant learning.

Thanks! I would love to see Spain one day...

I love visiting Zion, but not in the middle of summer. Unless I plan to walk the Narrows. Then the shade and cool Virgin River are delightful. The shuttles are nice but have limitations. You could have walked back to camp. ;)

Congrats on four years of blogging.

Fabulous description, Garry - truly a fascinating place to be! I think it might be less hot in April. Although, maybe more danger of flash floods -? Thanks for sharing your experiences and explanations.