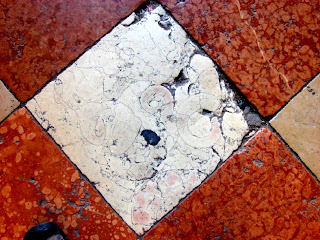 This month's Accretionary Wedge is hosted by Volcanoclast and asks of us the following:

Have you seen a great countertop out there? Sure, everyone says it’s “granite”, but you know better. Take a picture, post it on your own blog or send it to me and I’ll post it for you. Do you think you know what it is or how it was formed? Feel free to include your own interpretation and I’m sure others will enjoy joining in the discussion. Ron Schott suggested that we expand the entries by including any decorative stone material that has been separated by humans from it’s source. This includes buildings, statues, etc. There’s a lot of really unusual stuff out there, so make sure to find a good one.

So...my countertops are made of reprocessed clay (tiles, in other words) and are thus unremarkable, so I will take advantage of Ron's suggestion. I am offering up the picture above. Here's the story of where I found it... 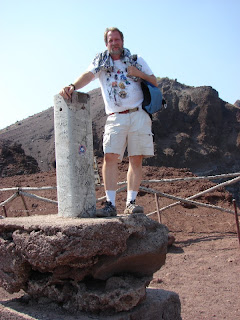 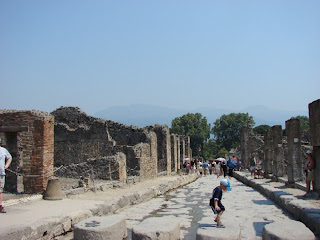 Several years ago we took a class of geologists and archaeologists to Italy and Switzerland for a taste of overseas geology and culture. I didn't have the connections to do our own chosen itinerary, so we were on an arranged tour with a few geological diversions. We made sure we got to Pompei, and climbed to the top of Vesuvius (above), and in the best moment of the trip we managed to find the site of the original Alvarez K/T boundary near Gubbio (the first place where evidence was found for the asteroid that ended the existence of the dinosaurs). That is one happy (and VERY relieved) professor in the picture below. I more or less knew where the outcrop was located, but we missed it on the first pass with our large bus on the very narrow road, and we had to go several miles before the bus could make an Austin-Powers-style back-and-forth U-turn. 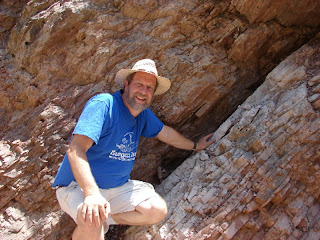 Still, we were on a tour, and in the middle stretches of the trip we explored the very beautiful towns of Florence, Verona and Venice. Spectacular, but not a lot of actual geology (although we had a lot to say about the mountains in the distance). I tried to convince our crew to go see the marble quarries at Carrara, but they insisted on seeing some badly engineered tower in some coastal town called Pizza or something like that instead (below). 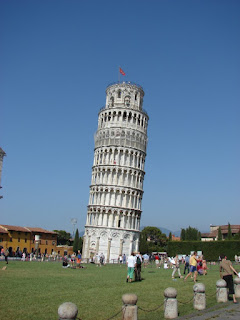 It was in Venice that I found my contribution to the Accretionary Wedge. Geology-wise, the city is interesting because it is sinking, in part for being built on mud, and partly because of the tectonic environment (it is near a convergent boundary, and is being compressed downwards between two mountain systems). But by its very nature it has no natural outcrops of rock at all. 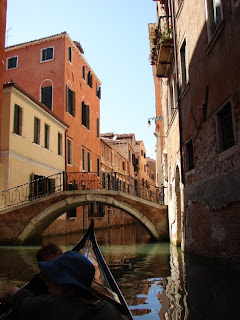 No natural outcrops, but plenty of rocks! The sidewalks and squares are covered with marble tiles from quarries in the Alps and Apennines. And as I was walking in the shade at the edge of Piazza San Marco (St. Mark's Square) I noticed unique swirls in some of the tiles: ammonites! 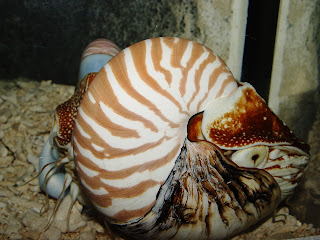 Ammonites were cephalopods related to octopi and the chambered nautilus that populated the seas in huge numbers during the age of the dinosaurs. It was nice to see these fossils in the middle of the urban environment of Venice, in a place so removed from their place of origin! 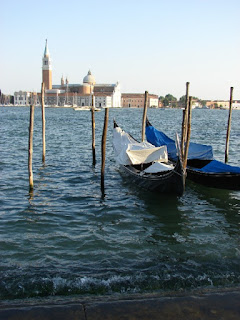