Vagabonding across the 39th Parallel: A Hoodoo Homily, Part Two 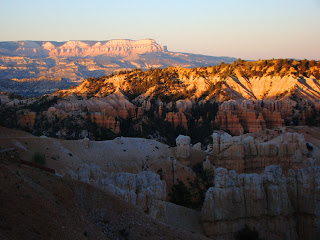 Back to my longer-term project, our vagabonding adventure across Nevada, Utah, and Colorado last July. We were about two weeks into our journey and had arrived at Bryce Canyon National Park. Although I've been there many times in the past, this was the first time in decades that we spent the night, so we had part one of the hoodoo homily in the afternoon, exploring the more remote viewpoints in the park. After a short dinner in camp, we went to the northern end of the park to see the sunset. We got out at Fairyland Point as the sun was disappearing over the horizon. 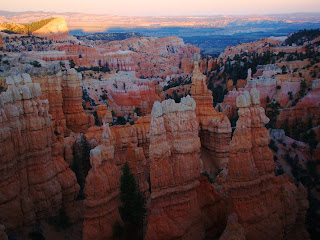 In structure, Bryce is a sort of plateau edge that is outlined by major faults running in a north-south direction. Standing on the rim looking east, you might be tempted to think you are standing on the uplifted side of the fault zone, seeing as how you look downwards into the adjacent valley. The reality is a bit more complicated, and is illustrated by looking northwest towards the Aquarius Plateau (below). The Claron Formation (the rock layer found at Bryce) is clearly visible on the high skyline, three thousand feet higher than the viewpoint at Fairyland Point. The rocks on the east side of the fault have clearly been lifted up relative to Bryce Canyon. 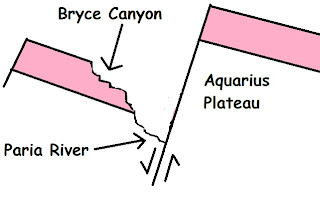 The reason Bryce "Canyon" is a cliff edge is the effect of headward erosion. The downdropped edge of the block slopes upwards to the west, so drainage was towards the Paria River to the east (that's hard to visualize the way I'm saying it. Look at the diagram above instead!). The erosion of the soft rocks of the Claron Formation formed a series of amphitheaters filled with the unique hoodoos that make Bryce Canyon National Park so spectacular. 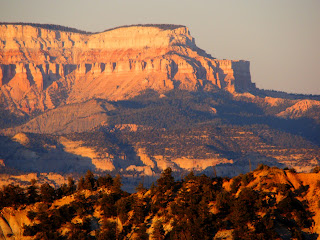 In some respects, Bryce Canyon is not really a sunset kind of park. Since the plateau rim faces east for the most part, and the park is in deep shadow as the sun is setting. I liked the effect. So many pictures of Bryce Canyon use the intense radiation of the sun to produce incredibly vivid colors (including most of mine). 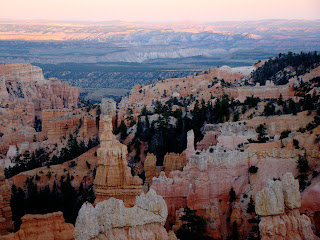 Looking at the Claron Formation in the twilight produces more pastel-like colors. Bryce Canyon takes on a much softer texture. 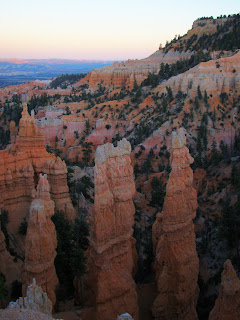 We started down the Fairyland Trail to get some sense of being below the rim. We had the parking lot and trail entirely to ourselves. 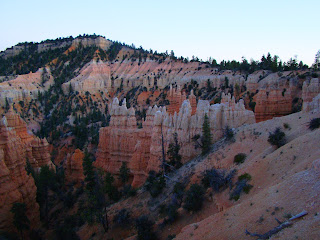 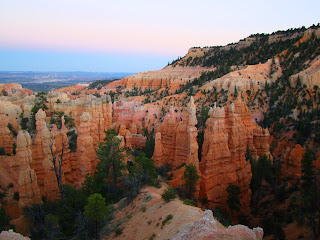 It was getting darker, and we had no flashlights. We turned around and headed back to camp for the night. I was intending to get up early for the third act of this Hoodoo Homily. 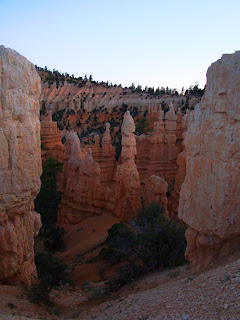 If this is what we will learn about in Geology, then I am very excited! Stunning photos.

I wouldn't want to get lost in the hoodoos after dark.

a marvelous spot from so many places along the top of the rim, too... sunrise was fantastic I remember - so many colours and layers - awesome.