The Other California: Dreams of Avarice and the First Gold Rush 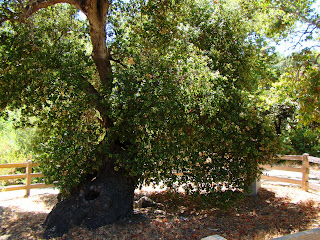 The Santa Clarita Valley is a suburb north of the San Fernando Valley, a place one drives through while following Interstate 5 to other places. I've been through it dozens of times on my travels, but I haven't usually had a lot of reasons to explore the place. It seems like the whole valley consists of new housing developments and fast-food rows. Oh, and Magic Mountain Amusement Park. But that's the thing about the Other California. There are always surprises in this state, no matter where you go. The strangely sloping hills and rugged mountains that ring the valley hide some interesting secrets.

Yesterday's post was a mystery question, and as the commenters correctly surmised, the Santa Clarita Valley is the location of four very intriguing geological sites. Stay tuned for the other three in coming blog posts. Today I want to talk about the very first gold rush in California's history.

Most people in our state are familiar with the Gold Rush, the one in 1848 in which James Marshall discovered flakes of gold in the Sierra Nevada foothills at Coloma while building a sawmill for John Sutter. The forty-niners. The Mother Lode. Black Bart and Joaquin Murrieta. Fewer people realize that this seminal event was actually the second gold rush in California's history. 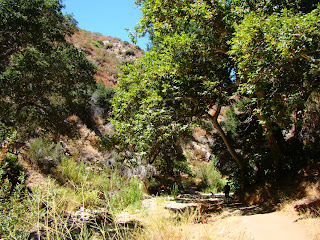 Before the Mexican-American War, California was still part of Mexico, and large ranchos had been established in many parts of the territory. The Del Valle Rancho was established on 48,000 acres of the Santa Clarita Valley in 1839, under the ownership of Antonio Del Valle. In 1842, his brother-in-law Francisco Lopez y Arbello was taking a nap under a large oak (reputed to be the one in the picture at the top of the post) during which he dreamed of being surrounded by gold. A short while later he pulled some wild onions out of the ground, and found gold flakes adhering to the roots. California's first gold rush had begun.

Compared to the one that followed in 1848, the rush was relatively inconsequential. The Mexicans were not very interested in advertising the find to the world at large, and the gold played out after only a few years. It did however mean that Mexicans who were familiar with mining methods were situated just a few hundred miles from the Sierra Mother Lode. They played an important role in many of the early gold discoveries in 1848 and 1849. 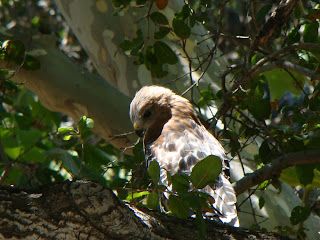 The discovery site is now preserved as Placerita Canyon State Park just off Highway 14 near the town of Newhall. There are few signs of mining left, but the canyon is a pleasant place to explore. We saw woodpeckers and hawks during our short visit. Los Angeles County Parks administers an excellent nature center with an unusually detailed display of the local rock types. A nice network of trails can be followed, including a paved handicapped accessible trail to the Oak of the Golden Dream (top of the post).

Speaking of golden dreams, keep your eye on the north side of the road as you return to Highway 14. Ensconced in the oak woodland you will see a somewhat bizarre looking development. This is the Golden Oak Ranch, a permanent movie set that has been owned by the Disney Corporation since 1959. Even though you can't visit the place, you've probably seen it many times over in the movies. And if you make movies, you can rent the ranch! 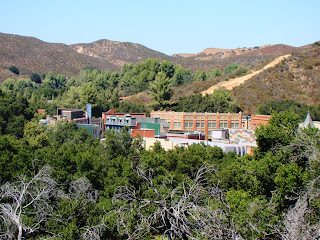 This link to the California Geological Survey has the classic story of the California's gold rushes, originally published in the 1948 Geologic Guide to Highway 49. In the next post we will take a closer look at the rocks in Placerita Canyon. It turns out they are kind of old. Well, really old.
Posted by Garry Hayes at 11:01 PM

Speaking of movie sets -- a popular movie location in the Santa Clarita area that is open to the public is Vasquez Rocks County Park.

First time visitors often have a sense of deja vu, because the rocks there have been in hundreds of movies, TV shows and commercials.

It's a Gorn! Beam me up Scotty!

You are absolutely right; Vasquez Rocks are so bizarre but beautiful.