OK, now Silver Fox at Looking For Detachment started it this year, and others are picking up the theme; the question is where you have traveled this year? It's always dangerous to ask a geologist about their travels. They do it a lot, whether for their jobs in industry, or as teachers leading field trips, or just for the fun of it. And they are always glad to expound on their experiences and show LOTS of pictures. And that, poor reader, is what is happening to you now. Some of our destinations will seem similar to those of last year, as I lead field trips to the same places, but a few new spots show up on the itinerary every year. I like seeing new places whenever I can, but I also like to return some haunts over and over, getting to know them intimately, and through their seasonal changes (note the Yosemite pictures that follow).

As usual, I did travel a lot, for a lot of reasons. Traveling dangerously? It felt that way a few times, but mostly it was just a lot of fun exploring. 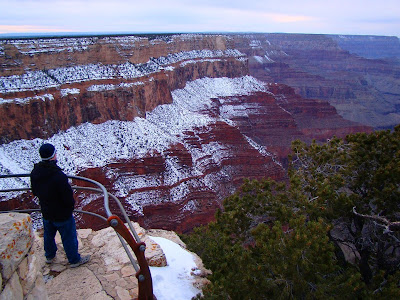 Our holiday travels brought us to within a four-hour drive of the South Rim of Grand Canyon, so we headed to one of our favorite winter destinations...icy roads, shivering cold temperatures, and no crowds. And a beautiful covering of snow to offset the intense reds and yellows of the Permian formations (the Kaibab, Toroweap, and Hermit Formation and the Supai Group).

A few days later, we got caught in a scary dust storm outside of Tucson. Four or five people died in a massive chain reaction accident in the southbound lanes. Visibility was as bad as I have ever seen, worse even than our Tule Fogs in the Central Valley. Apparently the dust was caused by agricultural fields being plowed, but I have heard that dust storms in the Four Corners region have been getting worse lately with the intense drought (apparently the worst in 1,000 years according to Ken Salazar). 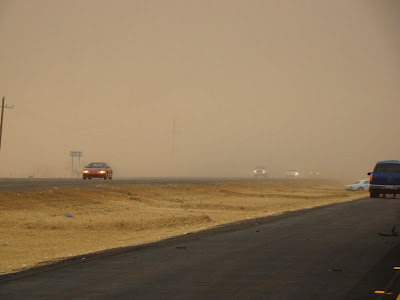 February brought the big field studies journey to Death Valley National Park. We saw water in the Amargosa River (if you aren't from around here, the word 'river' is tricky; most years, very little water flows, but this year the river was almost navigable in a canoe). There were a number of road closures that stymied our efforts to see some of the popular overlooks, but we did get to see something unique: The Devils Hole Pupfish in Ash Meadows. OK, we didn't see the actual fish; a fence protects the extremely endangered species in their cavern entrance home. 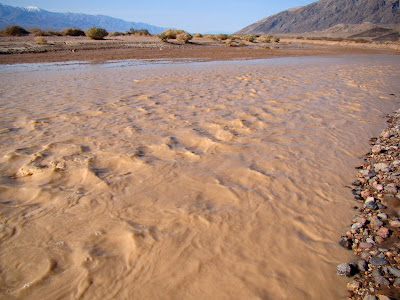 March was our day tour of the southern Mother Lode between Mariposa and Sonora. I snapped a shot of a chunk of ultramafic rock in the serpentine exposures in the Bagby Grade area. Serpentine...I had no idea what was about to happen with that rock this year! 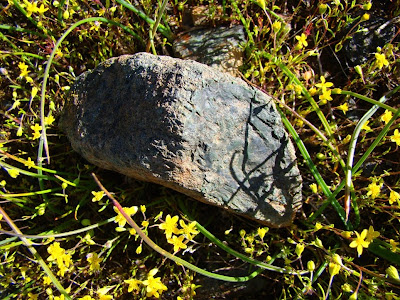 A week or two later, I was exploring the Red Rocks Area of Critical Environmental Concern, caught an interesting moonrise, and wrote about life on serpentine-based soils. Again, I didn't know what was about to happen with serpentine, our state rock. 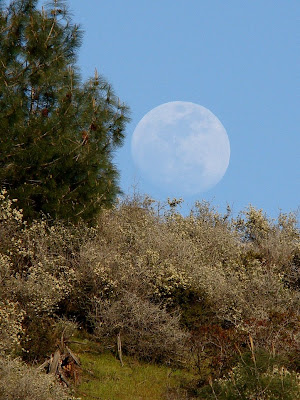 I made some April trips to Yosemite Valley and found the park still in the grip of winter. It was a cold spring this year, and the snow runoff was delayed by weeks. The valley floor was showing just a hint of greenery, and the waterfalls were modest. 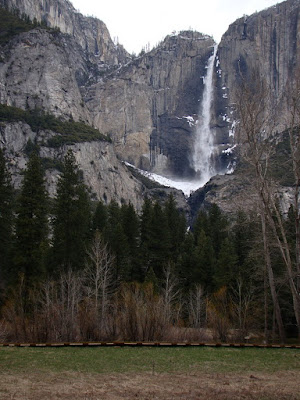 A few weeks later, the Geology Club at the school hiked down to a pair of natural bridges in the karst topography of the Mother Lode near Columbia in the Sierra Nevada foothills. They are imaginatively called "Natural Bridges", and are actually a pair of marble caverns that have been breached by Coyote Creek. They are a fascinating place to explore. 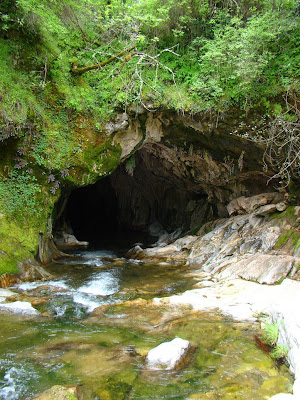 The National Association of Geoscience Teachers, Far Western Section had a conference at the beginning of May, and we explored the eastern Sierra Nevada and Owens Valley. We drove over Carson Pass which was still encased in snow, and had a wonderful time exploring Mono Lake and the Long Valley Caldera. 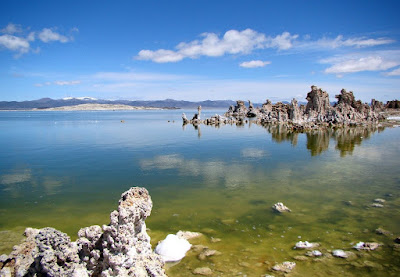 Later in May, we managed to pay a visit to Yosemite Valley on the peak day of runoff from the long delayed snowmelt. The river hit around 7,000 cubic feet per second, and there was some minor flooding of the meadows (yes, the wood pathway goes into the water in the picture below).
. 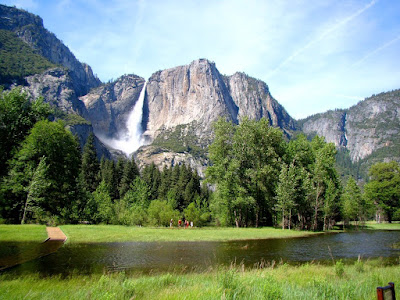 In August, we headed out to the Hawaiian Islands, for a bit of personal exploration instead of a class. The lava was starting to flow again in Kalapana, and I had a brief moment at the edge of the lava flow. 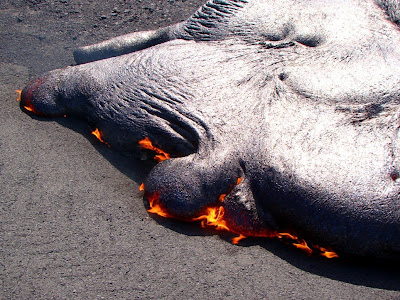 In June, July and August, California's state rock turned into a nationwide news story, and I had a brief career as a hand model on the cover of the San Francisco Chronicle. I was glad I had a store of pictures of the serpentine landscapes in our Coast Ranges and Sierra foothills so I could participate in the efforts to retain the rock as one of our state symbols. 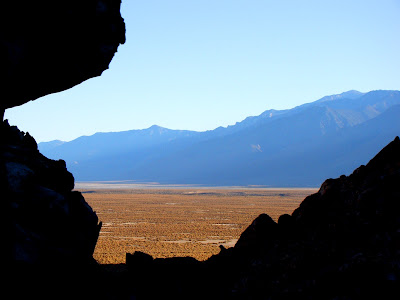 Fall arrived, and it was time for some more field trips with my students. We spent five days exploring the eastern Sierra, the Owens Valley, and the White Mountains. We were searching for amazonite and aquamarine when I snapped the shot above of the Owens Lake depression. 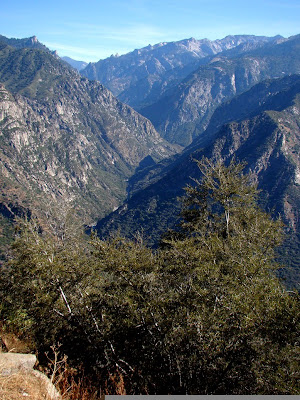 In October the NAGT--FWS had their fall conference, sponsored by CSU Fresno, with explorations of the Carrizo Plains, Yosemite, the Sierra foothills, and one of the deepest canyons on North America, Kings Canyon (above). 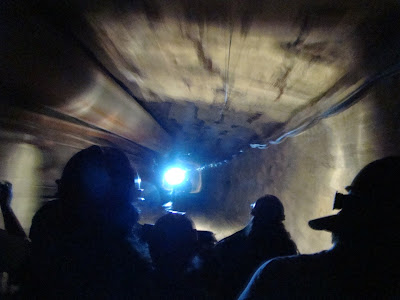 A week or two later, we took a day trip to the Mother Lode near Jackson and Angels Camp. Our journey included an underground tour of the Sutter Gold Mine (Sutter Creek), and Black Chasm Cavern outside the village of Volcano. 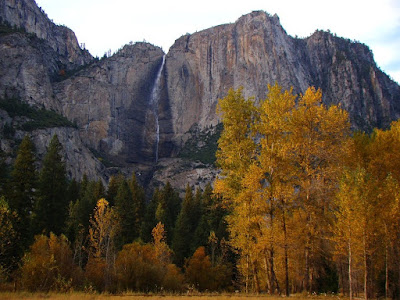 In November, we made one more trip into Yosemite Valley, and saw some glorious fall colors. There had been enough early rain to have a bit of water flowing over the falls. It was one of the most beautiful sights I've ever seen.
OK, wake up now, the slide show is done! Have some more eggnog!
Posted by Garry Hayes at 6:18 PM

Thanks for all the great road trips this year Garry. You geologists do get around.

Lovely photos! Wish I had had some to share from all of my trips + the energy to actually find/post the ones I do have...

Wow, thanks for sharing. I saw some of this country also. Sedona with snow in March, Grand Canyon snow in April, and am glad to see your pictures of California, my birth state.

Link to an image of a vertical mine shaft, looking straight down, in Plumas County:

One of a few that I've crawled around in up here - they aren't tourist attractions, and definitely not easy to find or access. Rattlesnakes, mountain lions, and bears render them rather tourist unfriendly. But more mineral/rock types than I can even begin to identify.

On a slightly more pastoral note, a picture of the ranch I do my woodcutting on, with Mt. Lassen in the background, at almost exactly eleven miles from the summit ... which makes it technically dangerous:

This meme comes at a perfect time. I'm going to mine the posts for 2011 travel ideas! I have never thought of the Grand Canyon in the winter. And those Coyote Creek caverns look like a great spot; I wasn't aware of them and will have to look them up for the next time I'm in the area.