The San Timoteo Badlands: Where'd All That Mud Come From? 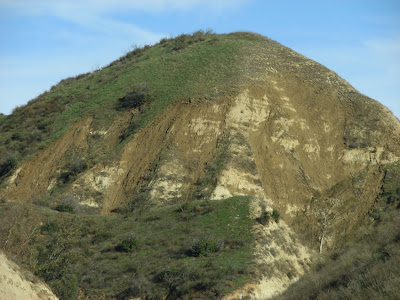 A small postscript to our journey these holidays that took us across the southwest. We seemed to be chasing the intense, even if not totally unusual storms that left a mess of mud everywhere. As we drove along State Highway 60 between Banning and Moreno Valley, I noticed one of the reasons that mud appeared in at least some places. It doesn't always involve areas that have been burned in wildfires. Sometimes the slopes are unstable to start with, especially in badlands topography. 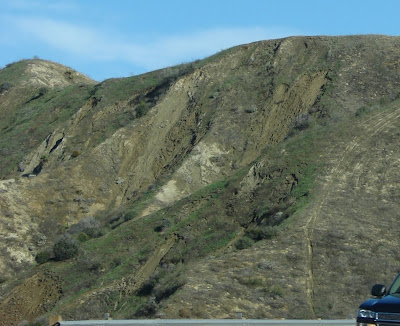 The San Timoteo Badlands are an underappreciated bit of Southern California scenery. Most people see the hills at 65 mph (as we did; these shots from Mrs. Geotripper are from a fast moving car, and she deserves credit just for getting a couple of clear ones!). The hills are composed of Pliocene and early Pleistocene terrestrial sediments. The loosely consolidated sedimentary rocks preserve a rich record of life from about 3.5 million to 700,000 years, including a cache of more than 1,000 bones from the excavations for a power station earlier this year, including camels, horses, giant ground sloths, and sabertooth cats. 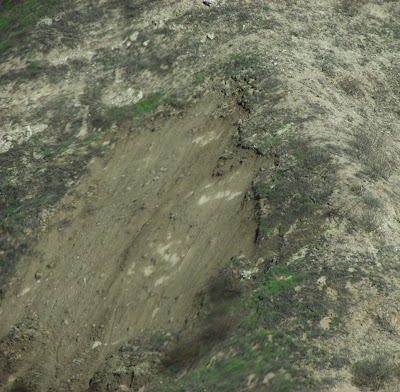 The rocks were stressed and deformed by movements of the nearby San Jacinto fault, one of the most active in California, and were uplifted into the rugged hills between Redlands and Moreno Valley. The rapid uplift and steep hillsides lead to slope failure, lots of it. Though surrounded by intense urban development, the badlands remain wild because there is no good way to build a stable foundation on such weak rocks. Around 8,000 landslides are mapped within a half-mile of the freeway. Many formed during intense storms in 1969 and 1998, and more formed this week. We passed dozens of new debris flows as we drove through the other day.
For more info:

So as I understand it, deposition of clay sediments ~3 mya did not lithify well enough to become shale before rapid uplift. Was there no successive strata above to provide pressure?