The Other California: The Mountains of My Youth 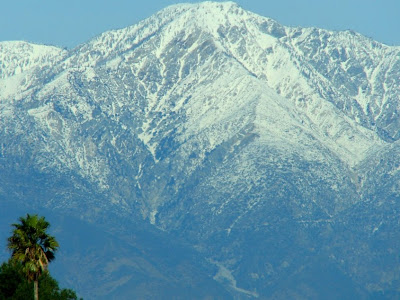 I grew up under the east end of the San Gabriel Mountains, a huge terrane of Proterozoic and Paleozoic metamorphic rocks intruded by Mesozoic granitic rocks, and squeezed up like a watermelon seed between the San Andreas fault and the Sierra Madre-Cucamonga fault system. I have heard that the San Gabriels have the statistically highest average slope of any mountain range in the world, and having hiked and climbed these mountains in my youth, I find the statement plausible.

As with many things of youth, I kind of took the mountains for granted, thinking the far away Sierra Nevada as the "real" mountains. The Sierras were only accessible during summer vacation, so the San Gabriels served as a mere substitute camping and hiking locale while waiting for school to get out. Having made a few excursions into the region recently after a thirty year absence, I am reassessing that opinion. The San Gabriel Mountains are a rare treasure. How many of the millions of people in the Los Angeles Basin-Inland Empire region are aware that they have gorges that are nearly as deep as the Grand Canyon in their backyard? Or that the pebbles in their alluvial fan backyards are some of the oldest rocks in the state, at nearly 2 billion years? Or on a more menacing note, that those pebbles arrived in their backyards via numerous monstrous mudflow events? Actually, I think some people are aware of that last one, especially in light of some of the recent wildfire disasters in the region.
Today's first picture is of Cucamonga Peak, which rises to 8,859 ft (2,700 m) from the apex of the alluvial fans at the mountain base at about 2,000 feet. That's a gain of about 7,000 in a horizontal distance of three or four miles. These are steep and high mountains! The canyons that carve the deep gorges on the flanks of these mountains are dangerous environments in the long run. Mass wasting in the form of rockfalls, debris avalanches and slumps accomplishes much of the erosion, and the intermittent streams that run through these valley are prone to disastrous mudflows.

San Antonio Canyon is one of the steep canyons that is well known to locals, but not so much to those outside the region. It drains the slopes of Mt. San Antonio (10,064 feet) and a ring of 8,000 and 9,000 peaks tucked behind Cucamonga Peak in the photo above. A paved highway provides access to tiny Mt. Baldy village and a modest ski resort (did you even know that southern California has skiing?). 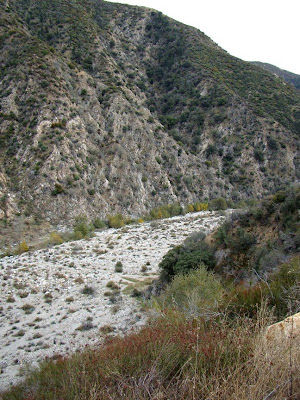 The lower canyon can be described quite accurately as ravaged by both nature and man, as the region is regularly swept by wildfires (natural and not). The 'floodplain' is choked with debris from numerous mudflows, and few trees can gain a roothold on the valley floor. The slopes above are almost impossibly steep. 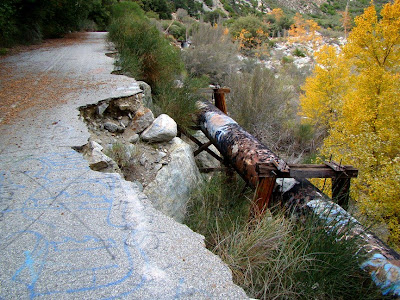 The roadmakers tried to maintain the highway on the valley floor, but the picture above shows how that worked out. The highway today winds along slopes hundreds of feet above the creek. In the upper canyon, the high peaks are dramatically revealed, and conifers make an appearance, mostly Bigcone Spruce, Jeffery Pine, and Incense Cedar. 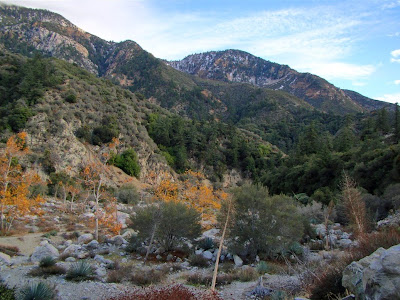 VW Bugs (1960s vintage) were wonderful cars, but my poor car had to drop into first gear to surmount the biggest obstacle in the canyon, the Hogback. It is just above and left of center in the picture below. Mt. Baldy Village is tucked into the area just beyond, and the major trailheads come a bit farther up the road.
For my fellow high school students, the Hogback was a test of one's manhood (and it was mostly guys). They would take their muscle cars up and down the highway at speeds approaching 90 mph, and some would make it out of the canyon. Others didn't. One morning a friend showed up at school sheepishly bearing bandages and scratches. A bit of questioning revealed that he had missed a curve and ended up 400 feet down the slope on the canyon bottom. I almost died at the top of the Hogback; I was driving my family up the road with my newly issued drivers permit when someone came down the highway passing on a blind curve and running us off the road. 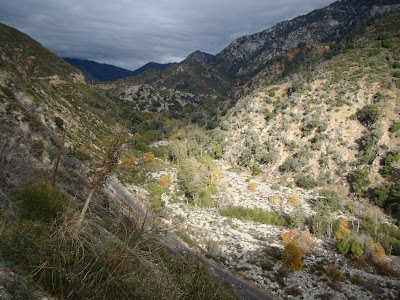 I should probably invoke some sort of Schott Rule on those geologists that live in the nearby towns, but I won't, so answer away!

The Other California is my continuing series highlighting the geology of the fascinating places in my fair state that don't often show up on the postcards that tourists buy. The state is a big place and I have yet to see it all, so if you have a favorite corner of the state and would like to put together a blog entry, I would gladly add it to the series.
Posted by Garry Hayes at 11:23 AM

Haven't spent much time in this part of CA. Sure is pretty and rugged. Interesting. I await answers.

Having grown up in the Chicago suburbs I didn't know what a mountain was unless made from landfill. We called it Mt trashmore.

Hmm, it has a fresh color. Is it a tailings pile?

Hmmm... A large mass of rock that is clearly out of place...
No, I won't say, since I live in the San Gabriel Valley, and have been up in that area several times. In fact, in the spring of '09 I was on an NAGT field trip up San Antonio Canyon. It's a fascinating place.
It's also a pleasant place for hiking and camping.

It looks to me like what one would see in the desert washes on the other side of the mountain-- flash flood sedimentary materials. Parclair

Hmm, didn't think any US peak could outclass Grand Teton in terms of rise/run, but Cucamonga on Google Earth looks like a challenger.