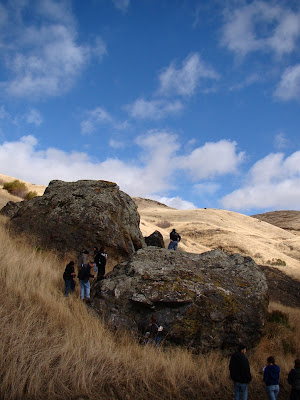 My students who are new to geology often have a great deal of trouble with terminology and spelling, and so I get a lot of weird misspellings and interpretations of common geologic terms. Baslat, continental margarines, and mantle plums are common errors. I've had to navigate through seduction zones, excretionary wedges and abnormal faults, but I can usually figure out what a student was trying to say.
But not on this one, from a geology neophyte on a recent trip. I asked a question about what kind of environment a particular rock at a particular stop formed in, and got the following:
"the rocks came from a lucious churn"
Now, the rocks in question were part of a subduction zone complex, and I did speak of the churning that happens in the accretionary wedge as the subducting plate mixes things up. But where did lucious come from? I have a feeling it was a normal word, highly re-interpreted, but, hmmm?
What are some of your best misspellings and misappropriations of meaning?
Posted by Garry Hayes at 4:27 PM

I misspelled "debris" as "derbis" on a strat and sed II midterm, and our prof, who loved to spend half an hour of class doing post mortems, spent way too much time belaboring the point. I thanked him by telling him, the next term after grades were official, that I didn't feel the class involved enough work or new learning to be worth a 300-level credit.

My bête noire is 'slip and slides'

Just a few from my howlers page ...

A prof who was a stickler about these things when grading student presentations had a "FOODPLAIN" in their glacial-themed GSA talk.

In grad school I was a teaching assistant for a geomorphology class, and an exam question referenced sub-glacial floods in Iceland and Alaska -- fishing for the students to define "jokulhaups."

In fairness, I didn't expect too many students to get it right, but we got back 22 exams with 22 different spellings of the word, none of them correct. I no longer have the list, unfortunately.

A female colleague who taught oceanography had students write a report about a field trip to the beach. One student started her report by saying: "We went to see the beach." Unfortunately, she spelled beach "b, i, t, c, h"!

My favorite was "camouflage" spelled as "camel flash!"

As for your question, could it be "a blueschist churned"? Rather than read "lucious" as "luscious," I'm reading it as "loo-shiss," which seems like a fair neophyte hearing of "blueschist." Were there blueschists there?

Callan, it took me awhile, but I reached the same conclusion, because we were looking at the blueschist knockers in the photograph. We were standing next to a busy highway, so I finally realized the same thing you did, that he heard "loo-shiss", when I describing that the chunks of rock were carried deep into the accretionary wedge, metamorphosed to the blueschist facies, and then "churned" upwards back to the surface. I blushed when I called them blueschist knockers. I should call them tectonic blocks or something

This is Great! Being only an informal educator there's no written tests. But I did have a 9 year old boy this summer keep asking me about the Vishnu Shit. Which, BTW, I did take a nice close up shot of just for you Garry.

That is a luscious photo. Maybe he meant the soil is a chernozem.