The Other California: Hemming and Hawing on the Hogback 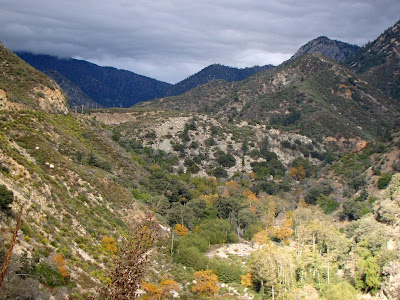 The nearly unprecedented deluge in California, Nevada, Arizona and Utah reminds me that I need to finish up some old business. Piling up a foot or more of rain on slopes that were burned in the last few years is a dangerous situation that can lead to mudflows and other slope failures problems on the steep slopes surrounding the L.A. Basin and California's Inland Empire. But such events have long been part of the history of the mountains, dating to long before humans entered the picture.

On Friday I posted a question about the Hogback in San Antonio Canyon in the Transverse Ranges of Southern California: what is it? It was an imposing barrier to my little VW Bug when I drove up the canyon decades ago, and it looks out of place, but it fits in very well with the dominant geological processes in the steepest of mountain ranges, the San Gabriel Mountains. That process is mass wasting, the failure of slopes and rock masses under the influence of gravity. Rock falls, debris avalanches, slumps, earthflows and soil creep are all common forms of mass wasting. 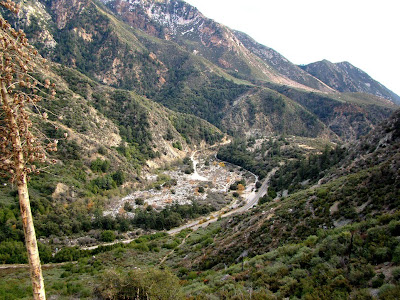 A view of the hogback from upstream (this shot is from Cow Canyon Saddle) gives a better view of what happened. A large mass of rock slid from the slope on the right, breaking up as it covered the canyon floor. It dammed San Antonio Creek, forming a temporary lake. Within a few centuries the lake filled with rock and debris, forming one of the few flat areas in the canyon, which much later allowed for a small village to be developed on the canyon floor. Ironically, many of the developments in the San Gabriels are built on mass wasting deposits (Wrightwood is built on mudflow debris and is sited atop the San Andreas fault for good measure, and Crystal Lake is an avalanche deposit as well). 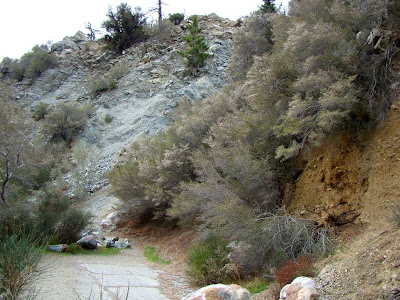 The rock slide is nicely exposed along the old highway, with a clear delineation between the lighter colored slide breccia on the left and brownish river gravels on the right. In retrospect, placing a highway at the toe of a huge rock slide next to a volatile stream seemed a less than bright idea. As noted before, the current highway goes over the top of the slide. 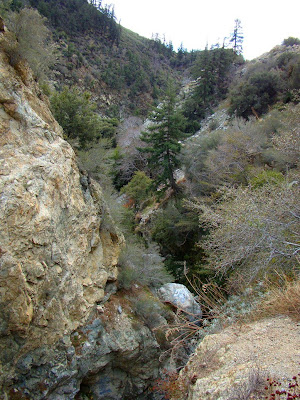 San Antonio Creek was forced into the left wall of the canyon (from the upstream side), and it started to carve directly through the solid bedrock, forming a deep gorge with a 30 foot waterfall. The sheer cliffs below the waterfall are used as a practice wall by technical rock climbers. 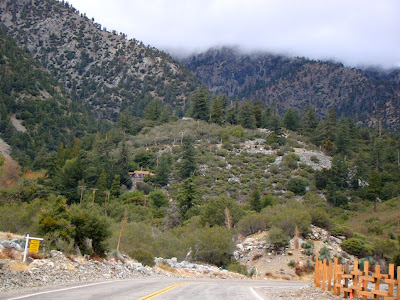 Once you know what to look for, many instances of mass wasting become obvious throughout the canyon. The rock mass above lies near the entrance of Icehouse Canyon, and drivers must climb a series of steep switchbacks to reach Manker Flats and the ski area in the canyon above. Another rock mass, at Cow Canyon Saddle, tells a very interesting story about the formation of San Antonio Canyon (below). 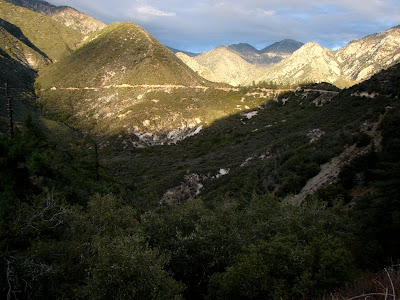 The upper part of San Antonio Canyon abruptly changes direction near Baldy Village, and Cow Canyon Saddle is situated at the turn. To the west, Cow Canyon drains into the larger and deeper San Gabriel River system. Before the landslide took place, upper San Antonio Canyon probably drained to the west into the San Gabriel River. The slide at Cow Canyon Saddle blocked the ancestral canyon, and diverted the drainage into the lower San Antonio gorge (or headward erosion quickly captured the dammed up drainage).

It will be interesting to see if any major changes took place in the canyon after the events of this week...
Posted by Garry Hayes at 10:11 PM

Garry, yes, I hope you post some updates. I know that area well...I grew up in Arcadia, CA. Then, the San Gabriel mountains were "my" mountains...now it is the Santa Rosas above Palm Desert.