Everyone Needs a Good Scapegoat: Molokai Certainly Has One 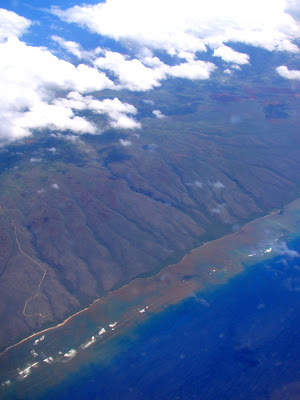 Mohi at the AGU Blogosphere reports on research done on Molokai by Jonathan Stock and others concerning damage done by feral goats which were released on the island in the 1500's. The stripping of the vegetation in the island's tropical climate has led to extreme levels of soil erosion. The muddy mess pours into the sea and is having a drastic effect on the coral reefs. I've yet to visit Molokai, but the report immediately made me think of some striking images I caught while flying over the island on my way to the Big Island from Oahu. The muddy water provides a sharp contrast to the normally deep blue water along the island coast.

I've talked about problems with invasive species on the Hawaiian Islands in the past (the three posts can be seen here). The native plants adapted to conditions on the islands, and have few defenses against pigs, goats, and cattle, and often cannot compete against other plant species that have been brought to the islands by early colonizers, and much later, by gardeners and landscape architects. The extinction of these native plants is one issue. The research by Stock and others highlights of the problems of having all vegetation stripped away, and how this effects ocean ecosystems as well.

I've said it in tweets, and I'll say it here: I sure wish I was at the AGU meeting in San Francisco right now instead of grading finals and lab reports! 18,000 geologists and earth scientists in one place has got to be a lot of fun...

Tough to see that and wondering how much of the runoff is coming from agricultural areas on the island. I must admit I can eat my share of Molokai Sweet Potatoes, but know that those beautiful islands have suffered much at the hands of humans.

Dave of the Coonties said...

I think the goats would have arrived with or after Captain James Cook, 1778. I don't think any Europeans got there earlier.

They arrived with Cook. Polynesians brought the pigs.