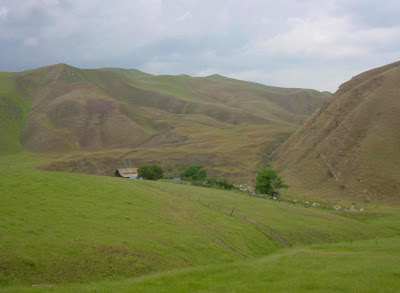 I meet with 72 5th-graders on Friday. The occasion was our SEEK (Science Education Encounters for Kids) day, a program NOT sponsored by NSF, GSA, NAGT, or any other acronym. It is a volunteer affair that has been running at our college for the last year or so. We bring students from local elementary schools to the campus where they can see science in a college setting. We do a lecture presentation and a pair of laboratory experiences. It was, as always, a lot of fun doing science with the kids. Something happened this time that really set me to thinking, though.

I asked them what school they were from, and so many of them shouted their answer that I didn't really pick out a school name from the cacophony, but I moved on with my intro about the prehistoric animals found in our region. And I got to the dinosaurs.

It seems like dinosaurs always capture the imagination of kids. I can talk about ancient sharks, sabertooth cats and giant cave bears, even mosasaurs and plesiosaurs (we've had them all around here), but they really perked up when I mentioned that a dinosaur was discovered in California too. Then I mentioned where, and their eyes grew wide, and a bunch of them shouted "that's where we live!".

They were, as it turned out, from Patterson, a small town at the west end of Stanislaus County, where California's first dinosaur was discovered in 1937. A 17-year-old young man by the name of Al Bennison was exploring nearby Del Puerto Canyon, and he found bones near the ridge-top above the farm and landslide seen in the picture above. It proved to be a species of hadrosaur, a Saurolophus, a large plant-eater of the duck-billed dinosaur clan (according to story related by Richard Hilton in "Dinosaurs and other Mesozoic reptiles of California", a femur from the creature was being used as a doorstop by a local rancher).

What struck me is that no one knew this. No one ever does. It seems that one of the most fundamental scientific facts about our county remains unknown by children, teachers, and just about everyone else. We teach our children their all-important math and English so they can pass their multiple-choice competency tests but this is an example of how we are falling short in the arts, the sciences and history. Math and English become more or less meaningless without the context of these other disciplines. But we are told that there just isn't room in the budget for these "frills" of education. It's more important to preserve our tax breaks than to take care of our vulnerable and young. According to recent news reports, American students have fallen to the bottom of the heap among leading economic powers in science and mathematics. And California spends less per student than just about any other state. And the cuts keep coming. Our summer session is about to be cut again this year. Sometimes I come close to despair.

I asked the kids what they wanted to be when they grew up. Their answers included the usual policeman, firefighter and other normal kid answers. One indicated she was going to be on "Dancing With The Stars". But one of them said "scientist". Maybe it was because they were on a science field trip, but it gave me that little bit of hope for the future. I hope we can give them the opportunities they deserve and the inspiration they need.

Postscript: I found a report of a discovery of a Hadrosaur in Orange County in 1927, but it was not actually identified as a dinosaur until decades later.

Postscript #2: One of those moments of irony...after making a crack about students aspiring to be dancers on television, our local paper has a front page article on a student at a local school...dancing on television (MTV). To their credit though, there was a science story too, about how Saturn got her rings...way back on page B-5. I'm glad we have our priorities straight.
Posted by Garry Hayes at 6:55 PM

I love to see kids get excited about science in the park.

BTW, job announcement is out for NR Interp.

I know it was posted, and I applied, but they may have given me my summer trip back, so it might be tricky if they want to hire me!

I don't know if you will see this comment but I happened upon a an article about Bennison and his dino bones and found that the property he found the bones on belonged to an older man named John Hammond who had been using one of those bones he had found years earlier as a door stop. Thought it was funny his name was John Hammond along with the character in Jurassic Park :)