Scientists Don't Believe Anything, But I Believe I Liked This Book: The Planet in a Pebble 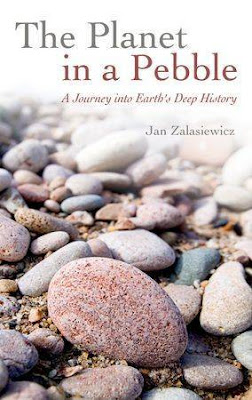 I would make a rotten book reviewer. My problem is that unless I'm reading a cliff-hanger type mystery by a Douglas Preston-Lincoln Child-Nevada Barr-Tony Hillerman type, I read books the way a wine connoisseur tastes wine. Sip by sip, enjoying the taste, the smell, the body of the liquid. So it was with "The Planet in a Pebble" by Jan Zalasiewicz, which I read a chapter and a paragraph at a time in my rare leisure moments at the end of the semester. I suck at deadlines, but I am happy to say I wasn't given one by Oxford University Press, who provided me with a review copy. 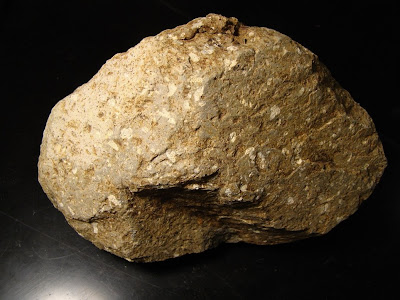 I started blogging here at Geotripper in an effort to translate the wonders of the earth sciences and geology to interested people who might not have a full background in the workings of science. A few weeks ago you may remember this post in which I talked about the rock in the photo above, and how it originated miles away in another time. It was short excursion of the imagination in geologic terms, encompassing no more than 100 million years. Jan Zalasiewicz has taken this idea that every rock tells a story into a journey across the vast expanses of time and space, into "realms that no spaceship will ever penetrate" and ending with a "diaspora without compare", covering a time period from 13.7 billion years in the past to untold billions of years into the future, but all within in the confines of a single slate pebble found along a coastline in Wales. The origin and gathering of the atoms that make up the pebble, the origin and development of the Earth, the formation of continents and ocean basins, the inner workings of the Earth's crust and the chemical interactions that take place there, and the connection and effects of life through time on the rock, these are all part of the story of a single rounded chunk of gray rock. It is a fascinating story, but the value of this book extends much further than providing a few hours of entertaining reading.
We have a problem with "belief" these days. As has been discussed in some of my previous blogposts on the subject, many a story about scientific discovery begins with the statement "scientists believe". The word "believe" has many meanings, but in today's society (American, anyway), it has religious connotations, and is opinion-based in usage. We pick the facts we believe in the same way we choose food in a buffet line. If a scientific finding is uncomfortable to us, or challenges our assumptions, we choose not to believe it. What is missing in most media reports is a full understanding about how researchers arrive at the conclusions (or tentative conclusions) that they have made. Because of this fundamental misunderstanding we have controversies in our society that should not be happening: political conflicts over global warming and its human origin is one example, and the prevalance of belief in creation-science and intelligent design is another.

Therein lies the great value of Zalasiewicz's book: pretty much every statement he makes about the history of the pebble (and by extension, the Earth and the Universe) is backed up with a cogent description of how we know each fact. From a simple magnifying glass to the most technically advanced "atom-counting machines" as he calls them, the story of the Earth is told with data, not conjecture and preconceptions. If this sounds like dry reading, I assure you it is not. How I wish textbooks could flow the way Jan's prose does; I dream of the day that students want to pick up their texts and read about the wonders of earth processes.

I've noticed some blogposts recently remarked on the passing of Carl Sagan fourteen years ago. He was a translator of science, one who understood the wonders of the cosmos and could communicate them to the society at large. We need more people like him today, and authors like Jan Zalasiewicz are doing a great job, if this book is any measure.