What's Wrong With This Picture? Travels in Southern California 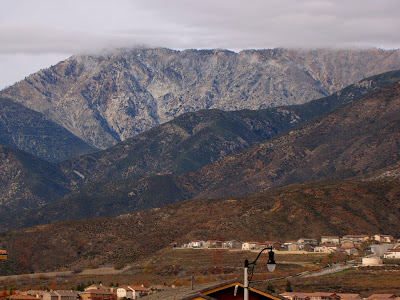 Southern California is ... unique. I grew up down there, along with several tens of millions of other people, and I watched my town grow from a little community of 20,000 people to something like 100,000 when I left thirty years ago. I've had occasion to return more than a few times and I see seven or eight cities which have merged and overlapped to form an urban center that isn't called Los Angeles or San Diego, yet has more than 2 million people. They have to live somewhere, and that's forced many to live in places that have to be considered sort of marginal.

In my high school days, I ran cross country, and we trained in the foothills and across the alluvial fans at the base of the San Gabriel Mountains beneath Cucamonga and Ontario Peaks (8,859 and 8,693 feet respectively). I liked exploring the chaparral country, especially after the spring rains, and in those days, the fans were undeveloped. They were considered sort of a wasteland, too rocky to grow citrus or graze cows, as was done in the flatter valleys below.

It was quite a shock, then, to visit some relatives who lived in one of the newer developments, tucked right up against the mountains. In many third-world countries, people live in the marginal environments in shanties. In Southern California, they live in two story mansions.

So here are my questions for the day: How many natural hazards can people in the developments above, at the base of the eastern San Gabriel Mountains, reasonably expect to experience at some point in their lives? What is the geological cost of living in beautiful Southern California? And how many of these hazards are spelled out in the mortgage papers these folks sign?
Posted by Garry Hayes at 10:56 PM

I wonder about those questions up here in the San Francisco Bay area, too. While searching for a parking space in the pouring rain tonight, I saw a bunch of cars parked on the edge of a highly eroded grassy drop-off on a hillside and thought "are you kidding?!" I think part of the challenge is that, with a little knowledge, you suddenly see hazards everywhere. Most folks just assume "they wouldn't let us live here if it wasn't safe!"

So true. On a (for me very rare) fire assignment when Idaho and Montana were burning up, public response to their house burning up was highly varied. My favorite was a man who said, well, if you live out in the forest, you might lose it all. That's the way it is. That was refreshing vs. being mad a firefighters who weren't willing to die for your furniture. (ps fire, flood, earthquake potential?)

At the base of the mountains, they're close to a fault (the Sierra Madre fault?). They're also at risk for wildfires, debris flows, landslides and wild critters moving into their yards.
That last might not sound bad -- "Look everybody, there's a bear using our jacuzzi! How cute!" But the reality includes coyotes eating your pets, skunks spraying under your house, rattlesnakes on your front porch and disease carrying insects.
However, let's put this in perspective. There's no place that has no natural hazards. As I tell my students: If you don't like earthquakes, you can move to North Dakota or Florida (the states with the fewest 'quakes). You'll have blizzards or hurricanes (and rednecks) instead!

Many people are totally ignorant of the potential for all the above mentioned "natural disasters" when buying a house. Offers a great view right?

I am really thinking that all you need to know to sell real estate is that people want to hear the words, "Great view." Then they're sold, and there never is any forethought to the potential downside to that great view.

Up here, it's flat as a pancake, so the only 'great view' is to have riverfront property. And that was fine until we started having all these floods 15 years ago. Now the city is buying these people's property and putting up dikes, and the only thing they want to do is complain that they aren't getting enough for their house. (Like anyone else is going to buy it knowing the flood hazard now.)

That's so true. Even up here in Canada people are often too concerned about their view and are really ignorant when it comes to potential landslides and other downsides. A house on a steep terrain can have a beautiful view of the mountains with no other houses in sight, but the bill for the geologists...Up here you also have to worry about the snowstorms in winter, so people have to be sure they've got a good roof!

I believe your last question, "And how many of these hazards are spelled out in the mortgage papers these folks sign?" is a very important one. Yes, earthquakes are one thing, but mudslides and fires are also hazards for these areas. Look at all the McMansions built in the foothills of Arcadia. Aye! I remember all the times the San Gabriels burned while I was a kid growing up, yet builders continue to build homes on them.

What about building entire cities on a Holocene delta of silt/clay/loam that has an extreme rating in terms of liquefaction potential. Sure they pound the sediments down, but these west coast cities are going to see property values plummet once that megathrust snaps loose.

I'd rather take my chances living in the foothills, where I can make a lot of visual assessments of landslide tracks and read up on underlying geology, and find the sweet spot. Otherwise its glacial uplands FTW!